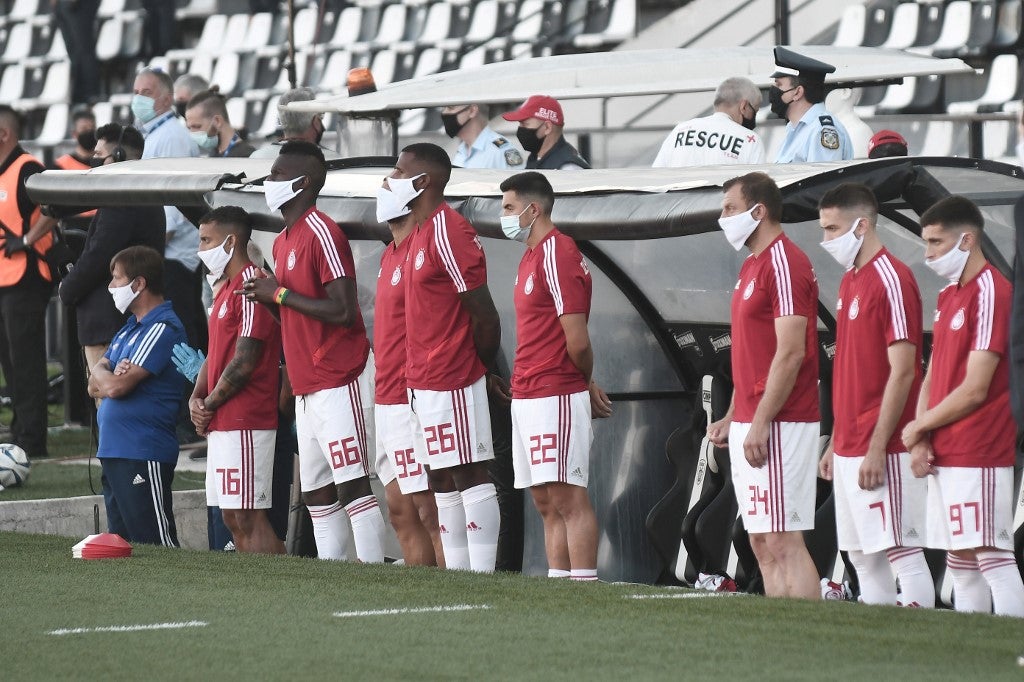 FILE – Olympiakos’ substitute players wearing a protective mask attend the first play-off match of the Greek football superleague between Paok and Olympiakos in the Toumba stadium in Thessaloniki on June 7, 2020. – The Greek Superleague decided to restart the football matches after three months of interruptions and the game in Toumba, reputed to be among the hottest in Europe, is played without the presence of fans as all the meetings being scheduled behind closed doors due to covid-19. (Photo by Sakis MITROLIDIS / AFP)

Thousands of Olympiakos fans on Sunday defied a coronavirus-enforced ban on large gatherings by celebrating their team’s 45th Greek title outside the Karaiskakis Stadium.

Inside the empty stadium Olympiakos beat local rivals AEK Athens 3-0 in the season finale play-off and finished with 91 points in a campaign which saw them only taste defeat once.

AEK, who have a chance of revenge next week when they face Olympiakos in the Greek Cup final, finished in third place with 69 points and will play in the Europa League.

“We are very proud of our record in the league. We had a good season. Congratulations to the team. We expect a completely different AEK in the cup final,” said Olympiakos coach Pedro Martins.

PAOK Thessaloniki played out a goalless draw with cross-town rival Aris and finished in second with 73 points and a Champions League play-off spot.

Panathinaikos on Sunday finished with a 3-2 win over OFI placing them in the fourth spot with 58 points and along with Aris (42 points) will join AEK in the Europa League.