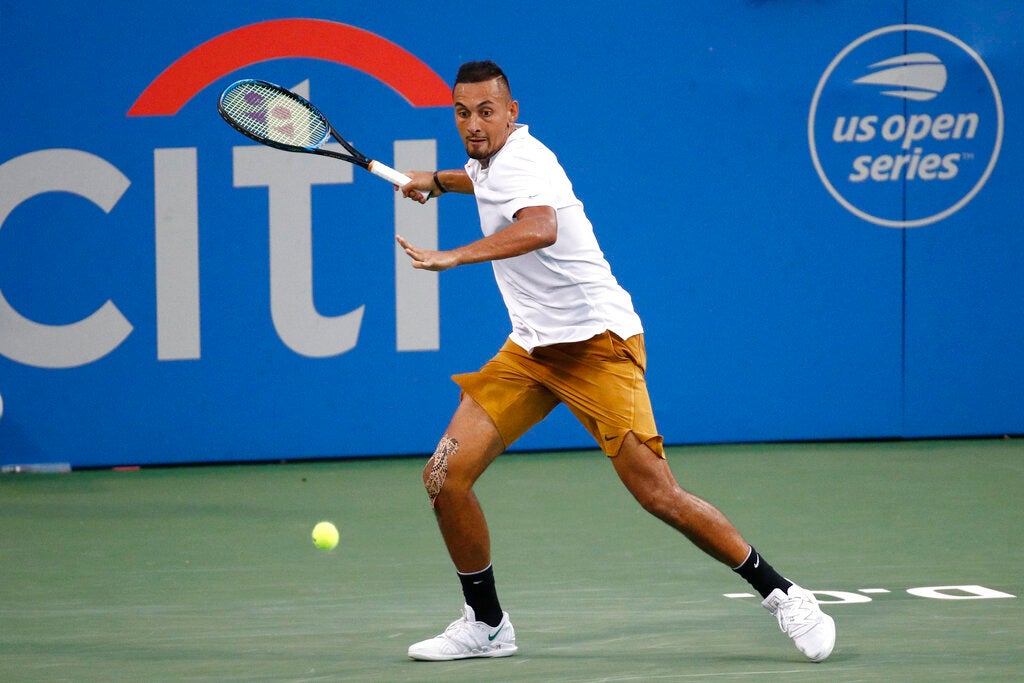 FILE – In this Saturday, Aug. 3, 2019, file photo, Nick Kyrgios, of Australia, returns the ball to Stefanos Tsitsipas, of Greece, during a semifinal at the Citi Open tennis tournament in Washington. (AP Photo/Patrick Semansky, File)

WASHINGTON — The hard-court tournament in the nation’s capital that was supposed to mark the official return of men’s professional tennis amid the pandemic was scrapped Tuesday — but the group in charge of the U.S. Open immediately said the tuneup’s cancellation “in no way impacts” its Grand Slam event.

The Citi Open, scheduled to start with Aug. 13 qualifying, was called off because of what tournament manager Mark Ein said are “too many unresolved external issues, including various international travel restrictions as well as troubling health and safety trends.”

The number of coronavirus cases has been spiking in spots throughout the United States.

Calling the cancellation of the Washington tournament “disappointing,” ATP Chairman Andrea Gaudenzi said: “Unfortunately for the moment, there are still large factors at play, which are outside of our control.”

The men’s and women’s pro tours both have been suspended since March because of the COVID-19 outbreak and have been eyeing a return to action next month. The first event on the most recently announced version of the sport’s 2020 slate is a women’s clay-court tournament in Palermo, Italy, starting Aug. 3, and WTA spokeswoman Amy Binder said Tuesday that tour’s “provisional calendar remains on course to proceed at this time.”

“Our current approach to the season is to provide opportunities where possible irrespective of travel restrictions,” Binder wrote in an email, “so that as many players that do have the ability and desire to travel can compete during this unique and difficult time.”

As of now, the week of Aug. 10 includes women’s tournaments in Lexington, Kentucky — where 23-time Grand Slam singles champion Serena Williams is among the announced entrants — and the Czech Republic. But no official men’s competition.

With Washington’s ATP stop, where Nick Kyrgios was the champion last year, now gone, the first chance for men to play sanctioned matches will be the Masters-level event usually played in Cincinnati that was moved to the site of the U.S. Open in Flushing Meadows, starting Aug. 22.

That is to be followed by the U.S. Open, where main-draw play is due to begin Aug. 31 without any spectators. The next Grand Slam tournament will be the clay-court French Open, which postponed its start from late May to late September because of the pandemic.

After the ATP and Citi Open announced the decision to abandon plans to play this year, the U.S. Tennis Association put out a statement saying it “understands the rationale” behind that cancellation.

The USTA’s statement continued: “This decision in no way impacts the U.S. Open or the Western & Southern Open. The USTA will create a safe and controlled environment for players and everyone else involved in both tournaments that mitigates health risks.”

A cautionary note was sounded for the USTA’s grand plans for a “bubble” to keep players and others safe during its two-week Grand Slam tournament: An American tennis player, Danielle Collins, was kicked out of World TeamTennis for breaking the league’s COVID-19 protocols.

WTT CEO Carlos Silva said Collins, a 26-year-old who was a semifinalist at the 2019 Australian Open, left the resort hosting all of the matches during the league’s three-week season and exited the state of West Virginia.

“The protocols have been put in place and communicated numerous times to protect the health and safety of our players, coaches and staff,” Silva said.

Collins was playing for the Orlando Storm in WTT, which took all nine of its teams and put them in one place for the season that began July 12 and ends Aug. 2.

The WTT is not affiliated with the WTA or ATP professional tours, so it was able to hold its season while they were on hiatus.

That’s also why smaller, independent exhibition events have been able to be staged, including a series run by Williams’ coach, Patrick Mouratoglou, called the Ultimate Tennis Showdown and played at his academy in France. UTS announced plans Tuesday for matches over the next two weekends.