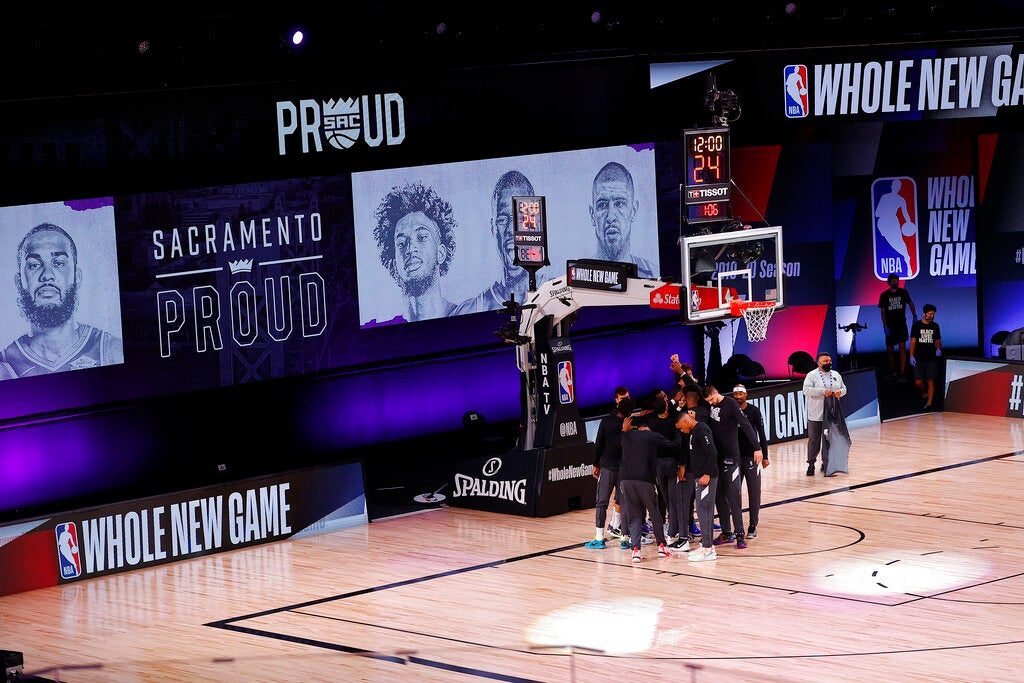 The Sacramento Kings take the court against the New Orleans Pelicans prior to the start of the game of an NBA basketball game Tuesday, Aug. 11, 2020, in Lake Buena Vista, Fla. (Mike Ehrmann/Pool Photo via AP)

All the momentum the Sacramento Kings had when the NBA season shut down in March disappeared when they arrived in the bubble.

The disappointing performance in Florida has left the Kings on the outside of the playoffs for the 14th straight season. That’s the longest active drought in the NBA and led to change in the front office with Vlade Divac stepping down as general manager.

“I feel like you’re always trying to play your best basketball late into March and April and I thought we were on our way to doing that,” first-year coach Luke Walton said. “So that part of it, I thought it was a success. We hit a bunch of lows this year too. Some came from injuries, some came from the way we were playing and that, we don’t want to see.”

Those lows were evident in the bubble when the Kings lost five of their first six games to get eliminated from postseason contention. The team was hampered by Harrison Barnes, Buddy Hield, Jabari Parker and Alex Len all positive for COVID-19 and missing practice time leading up to the games.

The Kings won their final two games to finish 31-41 but are now one shy of the longest playoff drought in NBA history. The Clippers franchise missed the postseason 15 straight years, spanning time in Buffalo, San Diego and Los Angeles.

That led to the change in the front office, where Divac stepped down after five full seasons as GM. Former Detroit general manager Joe Dumars has taken over on an interim basis and will help lead the search for a full-time replacement.

The bad finish coupled with a rough start that left Sacramento with a 15-29 record in January overshadowed the 13-7 stretch that got the Kings within 3 1/2 games of a playoff spot when the season shut down.

“It’s a process,” point guard De’Aaron Fox said. “I’ve been here for three years. I think we took a step forward and then we didn’t come out this year the way we were expected to. It’s going to take a lot of more work, but that’s what we’re here for. We’re here to win games, we just got to put it together completely.”

After a promising rookie season, Marvin Bagley III never really got going this season. He broke his thumb in the season opener and then missed time with sprains in both feet. He played only 13 games all season, with just four coming after Dec. 26. Bagley averaged 14.2 points and 7.5 rebounds but has not lived up to the billing yet of a No. 2 overall pick. Making matters worse is the fact that the player picked right after Bagley, Luca Doncic, averaged 28.8 points, 9.4 rebounds and 8.8 assists this season and is one of the most promising young stars in the game.

The biggest offseason question for the Kings might be whether to give Fox a maximum extension. Despite missing 17 games with an ankle injury early in the season, Fox is Sacramento’s best player and averaged a career-high 21.1 points on 48% shooting this season. The Kings last gave a maximum extension to DeMarcus Cousins in 2013.

Hield was expected to be a cornerstone player after signing a $94 million, four-year extension before the season. But he took a step back this season with his scoring and shooting numbers falling from last season. He was even relegated to a bench role in January and the team’s best stretch came with him as a reserve.

Bogdan Bogdanovic replaced Hield in the starting lineup in January and rewarded the Kings for the move. He averaged 15.1 points while shooting 37.2% from 3-point range. He is the most noteworthy free agent this season although he is restricted and it’s uncertain whether another will make an offer in an offseason that figures to have little salary cap room.

The Kings declined a $4 million option before the season on big man Harry Giles, who showed promise in the stretch before the league shut down in March. Now Giles is free to leave with no compensation this offseason as an unrestricted free agent instead of being locked up at a manageable salary.