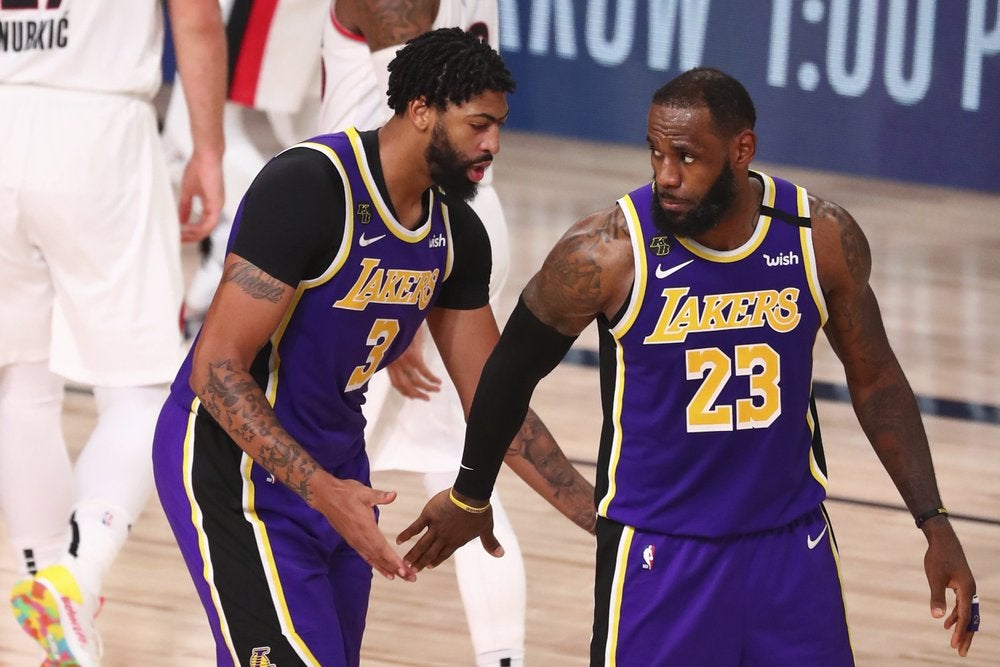 LAKE BUENA VISTA, Florida — More of a spectator than a supporter for LeBron James in the first half, Anthony Davis had a message for his teammate.

“I told LeBron at half I’ve got to take some of the pressure off of him,” Davis said.

With both superstars rolling and another dominant defensive effort, the Lakers again looked like the best of the West.

James had 38 points, 12 rebounds and eight assists, Davis scored 23 of his 29 points in the second half, and the Lakers beat the Portland Trail Blazers 116-108 on Saturday night for a 2-1 lead in the first-round series.

The Lakers shut down the high-scoring Blazers for the second straight game after the No. 1 seed was knocked off in Game 1. This was Portland’s highest-scoring performance in the series and it wasn’t close to good enough.

“That’s just who we’ve always been,” James said. “That has not changed since the first day we stepped on the floor at training camp.”

Damian Lillard scored 34 points playing with a dislocated left index finger, and CJ McCollum added 28 for the Trail Blazers. They will try to even the series in Game 4 on Monday.

Davis scored 31 points in Game 2 but had only six at halftime Saturday. Coach Frank Vogel thought the power forward was trying to move the ball and make the right play — he finished with eight assists — but looked for his own offense in the second half.

Portland was down only three with about 9 1/2 minutes left. But Davis then re-entered and started scoring from everywhere, turning lob passes into dunks or stepping outside for jumpers on his way to 12 points in the period.

The Lakers’ defense handled the rest, limiting the Blazers to just three field goals over more than seven minutes as they pushed the lead to 109-98 with a little more than 2 minutes to go.

“It wasn’t our night to make those shots,” Lillard said. “The effort was there. The aggressiveness was there. We just didn’t make the shots that we usually make.”

Carmelo Anthony added 20 points in his first good game of the series. He was 4 for 17 in the first two games and he started Game 3 with seven straight misses before making his eighth — by tipping in his own miss.

The Blazers made a lineup change, inserting Hassan Whiteside to play alongside Jusuf Nurkic in a big starting five. The unit got Portland off to a good start and the Blazers nursed the early lead all the way through the second quarter without ever really stopping James, who was 5 for 6 for 15 points in eight minutes in the period. But McCollum capped his 13-point period with a 3-pointer from the corner at the buzzer, making it 57-53.

James and Kentavious Caldwell-Pope combined for 12 straight points to send the Lakers from six down to a 70-64 lead. The Blazers came right back behind Anthony, who made three straight jumpers before a dunk on the break tied it at 72.

The Lakers surged back ahead with a 10-0 burst that made it 89-78 and they led by seven entering the fourth.

“It came down to a fourth-quarter game. Anthony Davis made his perimeter shots and we came up empty too often,” Blazers coach Terry Stotts said.

Lillard was hurt in the third quarter of Game 2 and hadn’t done anything on the court until arriving early Saturday to test the finger, which was wrapped in black tape. It didn’t appear to have much effect on his ballhandling or shooting for much of the game but he faltered in the fourth, going 1 for 6 and missing all four 3-pointers.

Lakers: Caldwell-Pope had 13 points. … Davis missed four of his five free throw attempts in the opening minutes and finished 7 for 14. … Rajon Rondo was active but didn’t play. He had back spasms before the game and still hasn’t played in the bubble after right thumb surgery.

James moved past Klay Thompson into third place on the career postseason list with his 375th 3-pointer. Former Miami teammate Ray Allen had 385 and Stephen Curry is the career leader with 470.

Stotts said Zach Collins (left ankle stress reaction) was still in the bubble but didn’t know for how long. The forward separated his left shoulder in October but returned to play in the seeding and play-in games before having to be shut down because of the ankle.

“As much as we miss him, I just feel bad for him because he had put so much work into being ready for this,” Stotts said. “And because of the hiatus it gave him the opportunity to play this season, which we weren’t sure he was going to be able to have if there was no hiatus. So it looked like things were lining up well for him so it’s really disappointing for him.”