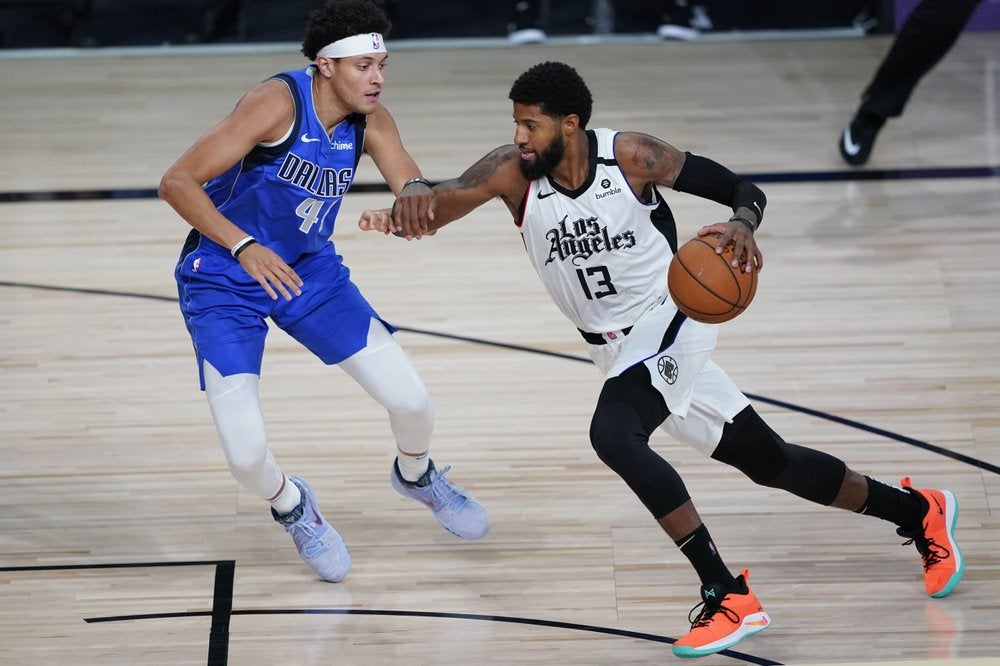 The All-Star guard scored 35 points and the Los Angeles Clippers rolled past the Dallas Mavericks 154-111 on Tuesday night to take a 3-2 lead in their first-round Western Conference playoff series.

George had shot 29% in the series and endured fans’ wrath on social media. He said he spoke to the team psychiatrist before Game 5.

“I mean, whatever it was, the bubble got the best of me,” George said. “I was just in a dark place. I really wasn’t here. I checked out. The past couple of games, it was just difficult.”

George said it didn’t feel like the playoffs until his teammates decided to create the atmosphere that was lacking inside the NBA’s Walt Disney World bubble.

“I came in with that mindset that this is Staples, we’re at home,” he said. “The place is packed. I really had to psych myself up. I thought the whole team took that and we ran with it. We created our own energy. We decided to dictate this game.”

Kawhi Leonard scored 32 points and Montrezl Harrell added 19 points and 11 rebounds for the Clippers, who set a franchise record for points in a playoff game. Los Angeles can clinch the series on Thursday.

Dallas’ Luka Doncic, who hit a game-winner at the buzzer in Game 4 to cap off a 43-point triple-double, was held to 22 points on 6-for-17 shooting.

Dallas coach Rick Carlisle was ejected in the third quarter of the testy game, which included six technicals and a flagrant-1 foul.

Doncic said Clippers forward Marcus Morris might have stepped on his ankle intentionally early in the third quarter.

Mavericks center Kristaps Porzingis sat out with right knee soreness. It was the second straight game the 7-foot-3 Latvian missed.

Leonard scored 22 points and Paul George scored 18 to help Los Angeles take a 76-52 lead at halftime. The Clippers shot 61% in the first half and led by as many as 27 points.

The Clippers continued the onslaught in the second half, bumping the lead to as many as 45 points.

“Tough game,” Carlisle said. “Very poor performance by us. It was disappointing. It was very physical. We just need to have a stronger physical disposition to start the game and throughout. We’ve got to get some more traction at both ends of the floor.”

Mavericks: Doncic was issued a technical foul in the second quarter. … G Tim Hardaway Jr. was called for a flagrant-1 after winding up and hitting George in the face on a drive. … Assistant Stephen Silas took over as coach after Carlisle was ejected.

Clippers: Shot 67% from the field in the first quarter. … Hardaway and Morris were called for double technicals in the second quarter. C Ivica Zubac was called for a technical in the third.

Clippers coach Doc Rivers was emotional while discussing the Aug. 23 shooting of Jacob Blake by police in Kenosha, Wisconsin, which has sparked national outrage and some violent protests. Blake, a 29-year-old Black man, was shot in the back while his three children watched.

“That video, if you watch that video — you don’t need to be Black to be outraged,” Rivers said. “You need to be American and outraged. How dare the Republicans talk about fear. We’re the ones that need to be scared. We’re the ones having to talk to every Black child. What white father has to give his son a talk about being careful if you get pulled over? It’s just ridiculous. It keeps going. There’s no charges. Breonna Taylor — no charges. Nothing. All we’re asking is you live up to the Constitution. That’s all we’re asking — for everybody. For everyone.”

Carlisle described what led to his ejection. Hardaway had the ball at the free-throw line, and then Rivers was granted a timeout.

“My understanding in that situation is that once a shooter has the ball, a timeout cannot be called by the opposing coach,” Carlisle said. “I thought the call was wrong. So I was asking about it and wasn’t getting a great explanation and then it turned into a technical and then another technical. I’m just standing up for my team.”