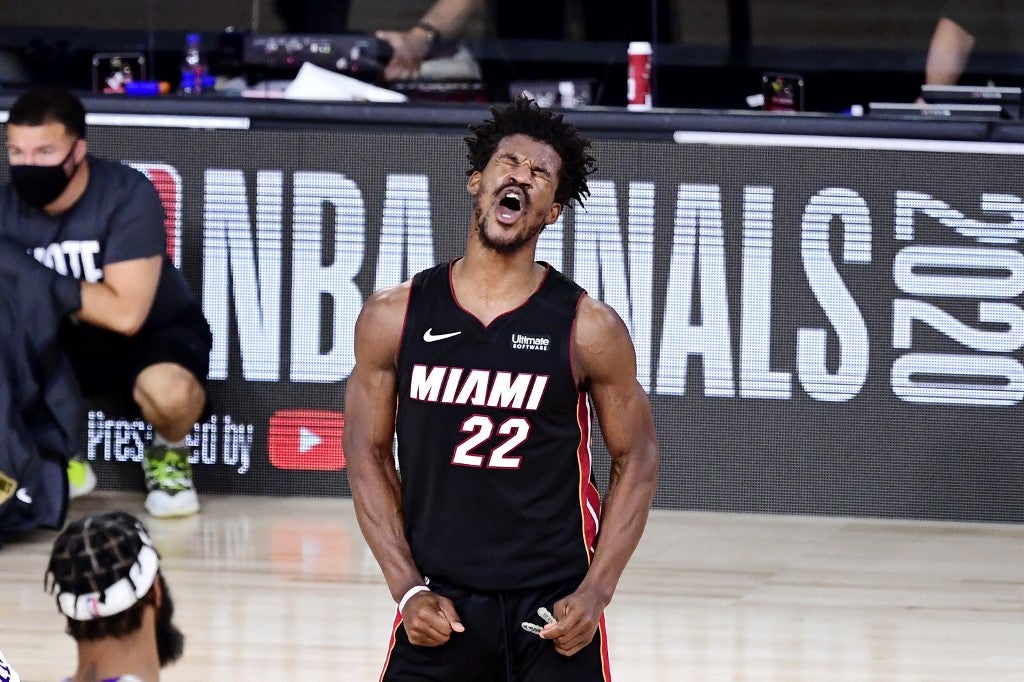 Jimmy Butler #22 of the Miami Heat reacts during the second half against the Los Angeles Lakers in Game Three of the 2020 NBA Finals at AdventHealth Arena at ESPN Wide World Of Sports Complex on October 04, 2020 in Lake Buena Vista, Florida. Douglas P. DeFelice/Getty Images/AFP

Jimmy Butler insisted that even with two key players hurt and two double-digit defeats in the books the Miami Heat aren’t done in the NBA Finals.

On Sunday, made it so, delivering a 40-point triple-double in the Heat’s 115-104 victory over the Los Angeles Lakers that cut the deficit in the best-of-seven championship series to two games to one.

“Phenomenal,” was the verdict of Lakers superstar LeBron James.

“We know how Jimmy is in these moments, and the world has seen what Jimmy Butler is capable of and he just played tremendous for us,” said Miami’s rookie sensation Tyler Herro.

“He did everything, obviously. Ran the offense all the way through him, made play after play, bucket after bucket.

“And defensively, guarding LeBron, making it tough on him … we were all following him.”

But Butler insisted it was a team effort all the way.

“I think LeBron has got the best of me way too many times,” Butler said. “I respect the guy for it, but this is a different time now, a different group of guys that I have around me, and we are here to win. We are here to compete.

“We’re not going to lay down, we’re going to fight back in this thing.”

The Heat, seeded fifth in the Eastern Conference, have already exceeded expectations by reaching the title series, in which they’ve been hobbled since Bam Adebayo and Goran Dragic went down with injuries in game one.

Butler, not one to throw in the towel, said effort was the key to bouncing back from two double-digit defeats and making a series of it.

“But none of us, none of us are ever going to leave anything in the tank. We’re going to lay it all out there on the floor.”

Heat coach Erik Spoelstra said before Sunday’s game there was no timeline as yet for a possible return by either Adebayo or Dragic.

In the meantime, Butler says he’ll shoulder whatever load he needs to, for the sake of his teammates on the floor — and for those sidelined by injury.

“I go out there and I go to war for those guys because whenever they’re out there, they’re going to war with and for me,” he said.