Hamilton hails Schumacher and thanks Mercedes after record-tying win 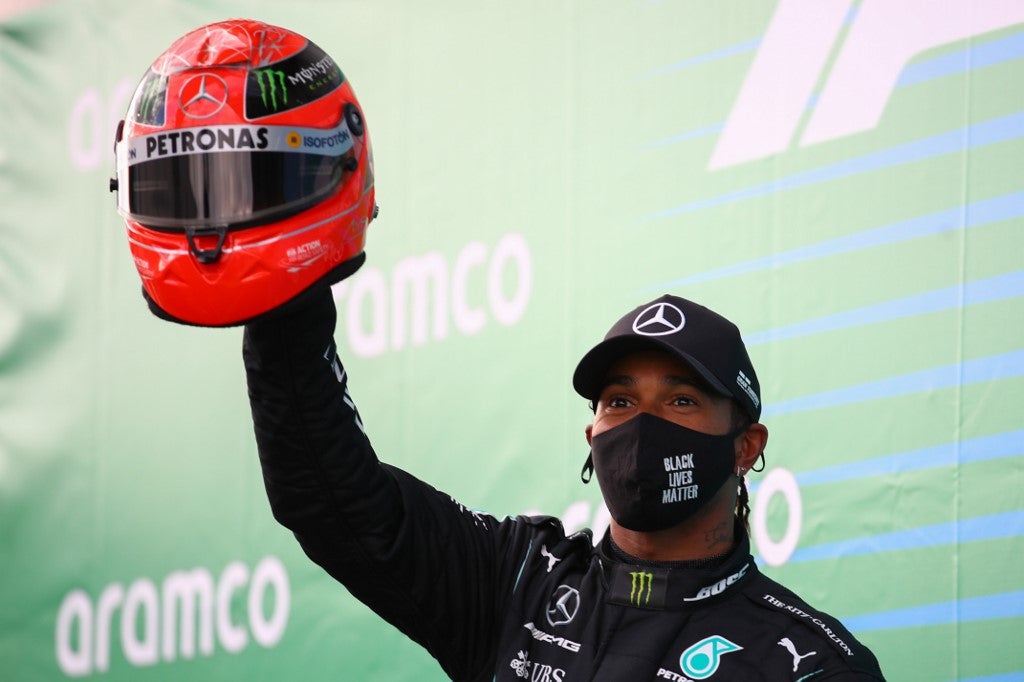 Winner Mercedes’ British driver Lewis Hamilton celebrates with the red helmet of former German Formula one champion Michael Schumacher that was offered to him by Mick Schumacher (unseen) on the podium after the German Formula One Eifel Grand Prix at the Nuerburgring circuit in Nuerburg, western Germany, on October 11, 2020. (Photo by Bryn Lennon / POOL / AFP)

Lewis Hamilton heaped praise on Michael Schumacher for leading the way in Formula One and thanked Mercedes for gambling on a “young black boy” following his record-equalling 91st Grand Prix win on Sunday.

Speaking at length in the virtual news conference after claiming the Eifel GP, his seventh win of the season, the runaway series leader talked of his admiration and respect for the seven-time champion German whose records he is chasing.

“That number 91 is so big and, when it’s so far away, it’s hard for people to perhaps fully understand how hard it was for him to get those 91 wins,” six-time F1 champion Hamilton said.

“To deliver, weekend in and weekend out, year on year, and to stay so in shape and be so precise … I understand that now, more than ever.

“What he achieved in so many areas, pushing the limit in terms of the physical side, he really was a pioneer in being the fittest driver.”

Hamilton became a Mercedes-supported driver when he was 13 and embarking on his international karting career.

“I’m just unbelievably grateful to Mercedes for giving a young black boy a chance when I was 13 years old and supporting me all the way,” he said.

By the time he succeeded Schumacher in the Mercedes F1 team in 2013 Hamilton was already a world champion after winning his first title with McLaren in 2008.

On Sunday, Schumacher’s 21-year-old son Mick presented Hamilton with one of his father’s racing helmets. Hamilton was briefly speechless, but later explained it was not the first in his personal collection.

“I actually already have one of Michael’s helmets,” he said. “One of the really, really special moments for me was in Abu Dhabi in 2012 when I went over to the Mercedes hospitality and met with Michael.

“We exchanged helmets and that was, for me, a moment that I’ll never forget. To stand with someone that I grew up watching on TV and have the honor of exchanging jerseys, or helmets … It’s what us sportsmen do and it’s the highest sign of respect.”

“To have his family honor me today, I’m just incredibly humbled. His son is such a great, bright talent, a really genuine human being.

“I’m going to have two special helmets from Michael in my small living room.”