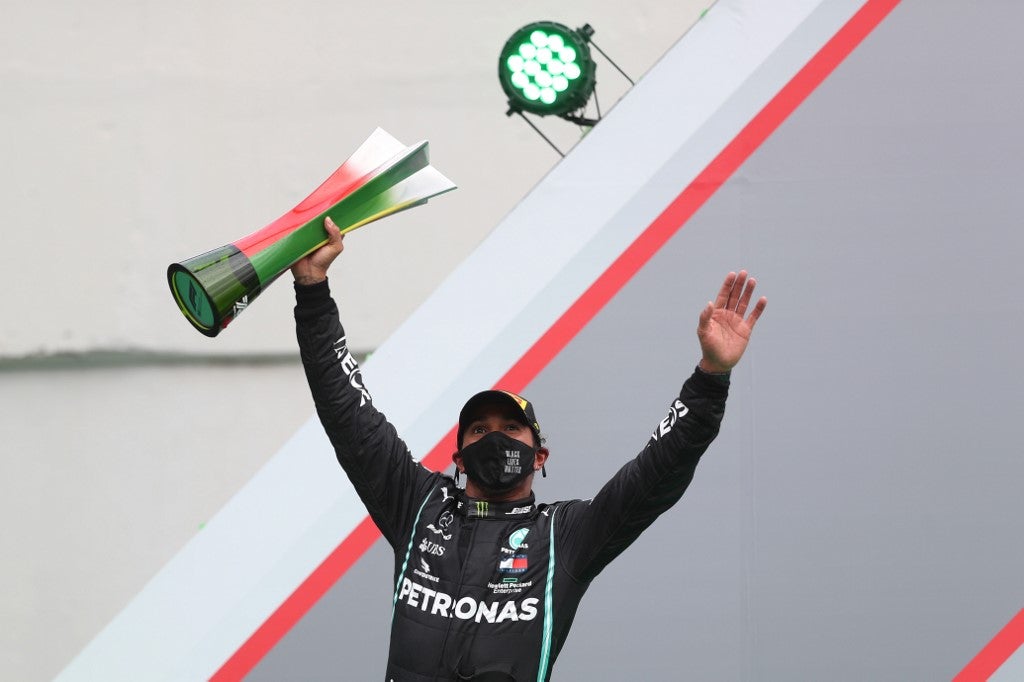 Mercedes’ British driver Lewis Hamilton celebrates on the podium with the trophy after winning the Portuguese Formula One Grand Prix at the Autodromo Internacional do Algarve on October 25, 2020 in Portimao. (Photo by JOSE SENA GOULAO / POOL / AFP)

Lewis Hamilton became Formula One’s record all-time race-winner on Sunday when he claimed his 92nd victory at the Portuguese Grand Prix to pass Michael Schumacher at the top of the list.

His win lifted him one clear of Schumacher’s 14-year-old record of 91 triumphs after a thrilling inaugural F1 race at the Algarve International Circuit.

After a long hug with his father Anthony who, together with step-mother Linda, had witnessed his historic achievement, Hamilton heaped praise on his Mercedes before joining his race engineer Peter ‘Bono’ Bonnington and Bottas on the podium.

“I owe this and so much to all these guys here and the team at the factory,” said Hamilton.

“For their tremendous work, they are always pushing the barrier higher and higher. It is a privilege working with them… Working with them is inspiring.”

Hamilton fought back after an early scare, when he led but dropped to third after a rain shower, to demonstrate impeccable tire management and flawless judgment as he claimed an eighth win in 12 races this year.

Hamilton’s triumph added another unprecedented feat to his roster of records. He now has the most wins, a record 97 pole positions, a record 161 podium finishes and a record 45 consecutive points finishes.

The 35-year-old Briton extended his championship lead over Bottas to 77 points.

A seventh world title, which would equal another Schumacher record, now looks all but inevitable with only five races remaining this year.

The 35-year-old Hamilton said the race had been “tough” and he had suffered a cramp.

“Yes, it’s a very physical sport and I had it in my right calf. I was lifting down the straights and it was painful.”

Charles Leclerc was fourth for Ferrari ahead of a surging Pierre Gasly after an excellent drive in his Alpha Tauri.

Carlos Sainz came home sixth for McLaren to beat Sergio Perez, who recovered from a first-lap clash with Verstappen, to finish seventh for Racing Point ahead of the two Renaults of Esteban Ocon and Daniel Ricciardo.

On a cool and breezy day, with light rain forecast, an appreciative crowd of 27,500 were scattered around the new 90,000-capacity circuit, hosting the first Portuguese Grand Prix since 1996, as the drivers completed the pre-race ceremonial, including an anti-racism salute led by Hamilton, in a Black Lives Matter t-shirt, taking a knee.

At the start, Hamilton led away from his record 97th pole while, from third, Verstappen passed Bottas before the Finn surged back to pass him and his team-mate to take the initiative.

As gentle rain fell, Hamilton slithered, while Sainz, on softs, found grip to take the lead, evading a Verstappen-Perez collision, which sent the Racing Point car spinning. Briefly, it was wild stuff.

In the “ice-rink”-like conditions, the Mercedes men, on mediums, needed time to warm their tires before catching and passing Sainz on laps six and seven respectively.

By lap eight, Bottas led Hamilton by 1.8 seconds and Verstappen, third, by four.

Despite the blustery conditions, normal service was, it seemed, resuming.

Raikkonen, in his record-increasing 324th race, was first to pit from softs to mediums, prompting a series of stops as grip diminished.

Almost immediately, he set a fastest lap and by lap 20 had closed on Bottas, passing him with a bust of DRS on the straight. Verstappen pitted and re-joined sixth as Hamilton pulled clear.

All this left Hamilton leading his team-mate by 7.3 seconds on lap 30 with Leclerc third, adrift by 27 seconds.

Hamilton pitted after 40 laps, taking hards and slotting in behind Bottas who led again. The Finn suggested a switch to softs, but when he came in Mercedes gave him the white-walled hards.

For the Englishman, recovered from the early dramas, it was almost a Sunday stroll in the park.

He led by 12 seconds with 21 laps to go, with little more than light rain threatening his progress on another record-breaking day.