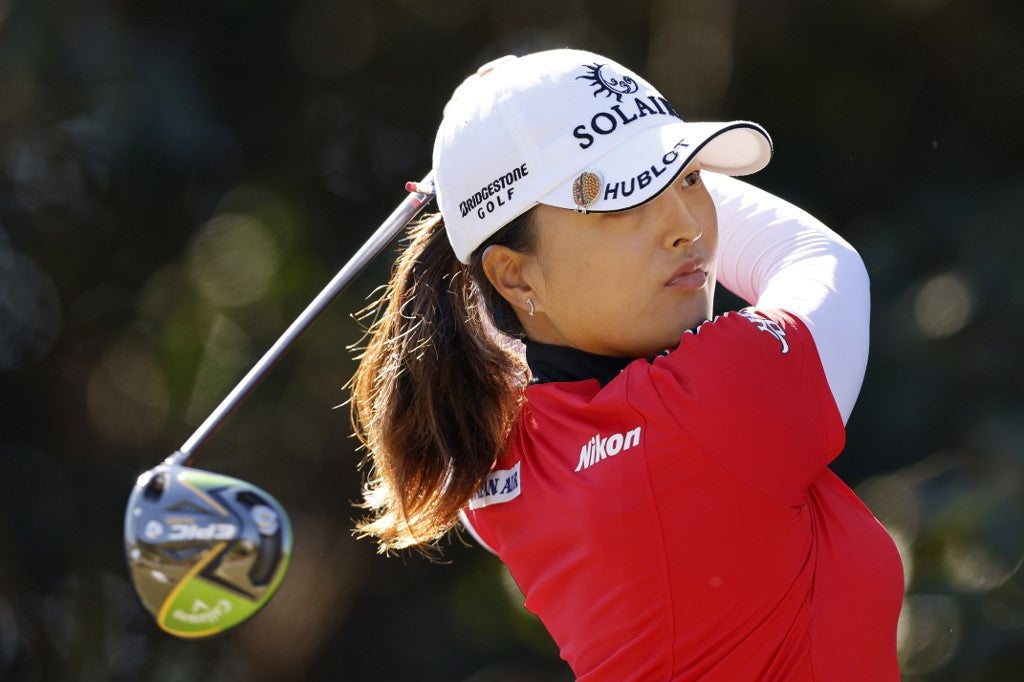 Jin Young Ko of Korea plays her shot from the 11th tee during the second round of the CME Group Tour Championship at Tiburon Golf Club on December 18, 2020 in Naples, Florida. Michael Reaves/Getty Images/AFP

World number one Ko Jin-young fired five birdies in a five-under-par 67 on Friday to seize a one-stroke lead over Kim Sei-young and Lexi Thompson in the LPGA Tour Championship.

South Korea’s Ko, playing just her fourth LPGA event of the pandemic-disrupted season, had a 36-hole total of nine-under par 135.

With a $1.1 million winner’s prize on offer, Ko could end up topping the 2020 money list with a victory despite making so few starts. She wasn’t even assured a place in the Tour Championship until she tied for second in the US Women’s Open last week.

However, she was trying to focus on her game, rather than the trophy or the fact that one of her closest pursuers, Kim, is also chasing her for the world number one ranking.

“World ranking, my opinion is it’s just (doing) little things to play golf,” she said. “So if I play good I can do world ranking No. 1 still. If not and then she plays good she can do it … it doesn’t really matter.”

Kim signed for a second-round 69 while overnight leader Thompson, seeking a first victory of 2020, carded a 71.

She drained a birdie bomb at the 15th for a share of the lead and was alone in front after a birdie at the par-five 17th.

“I want to go bogey-free (the) next two days, so I’m looking forward the weekend,” she said.

Kim got off to a sizzling start, with four birdies in the first five holes pushing her to nine-under before bogeys at the seventh and ninth.

She tapped in a birdie putt at 14 that briefly gave her the solo lead on eight-under, but she couldn’t find another birdie as Ko edged ahead.

Thompson, seven-under to start the day, made a promising start with a birdie at the second, but stalled with bogeys at the third and ninth.

She was back in contention with birdies at 14 and 15, and maintained her momentum with a superb up and down from a tough lie in the bunker at 17.

Australian Hannah Green, whose two LPGA titles include the 2019 Women’s PGA Championship, fired five birdies with one bogey in a four-under 67 that put her in solo fourth on 137.

“I did hole a really nice putt on the first, which is always nice,” Green said.

“Over the last couple weeks I’ve kind of struggled with my consistency in putting, so I made a birdie on four and then five and holed some long putts — which kind of felt like it’s been a while since I holed that length of putt,” added the Aussie, who watched one from 35 feet fall in.

Half a dozen players shared fifth on 138, a group headed by American Nelly Korda who notched seven birdies in a six-under 66.

New Zealand’s Lydia Ko fired the round of the day with a bogey-free seven-under 65 for 139.