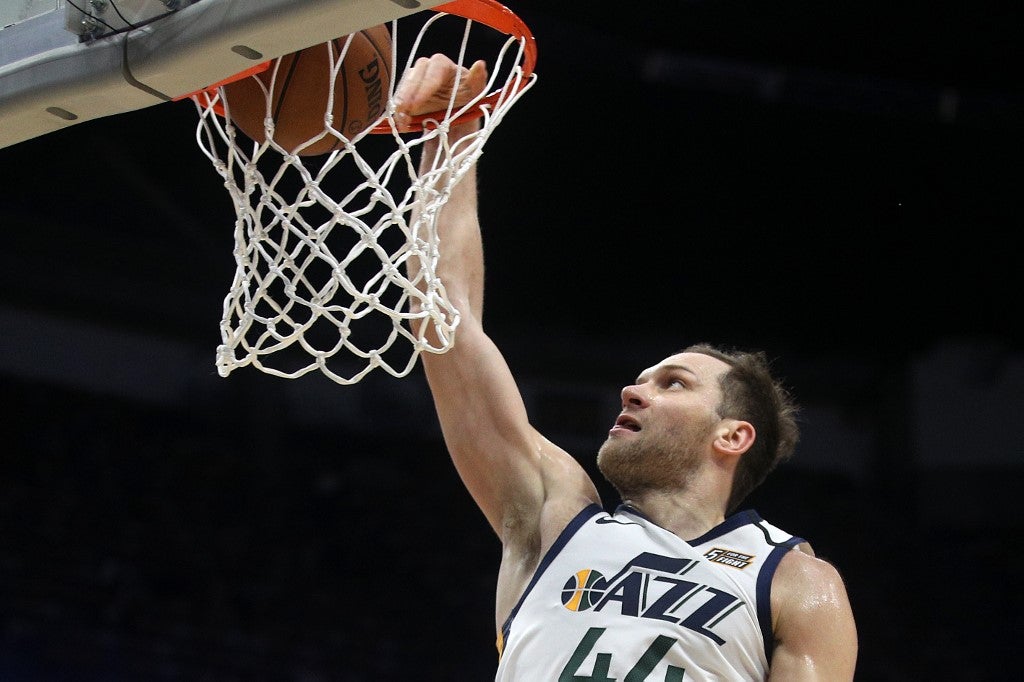 Bojan Bogdanovic scored 28 points to lead six Utah players in double-figure scoring as the visiting Jazz waltzed past the San Antonio Spurs 130-109 on Sunday in the Alamo City.

The Jazz (4-2) won their second straight game by taking control in the second quarter, leading by as many as 23 in that period and never allowing San Antonio to get within 12 points the rest of the way.

Donovan Mitchell added 22 points for Utah, with Jordan Clarkson hitting for 18 off the bench, Mike Conley scoring 15, reserve Joe Ingles adding 15, and Royce O’Neale contributing 11 points and 11 rebounds. Rudy Gobert grabbed 16 rebounds for the Jazz, which garnered a 66-49 edge on the glass.

Keldon Johnson paced the Spurs (2-4) with 22 points while DeMar DeRozan scored 19, Lonnie Walker IV and Jakob Poeltl tallied 11 each, and Rudy Gay added 10. The loss was the fourth straight for San Antonio after beginning the season with two victories.

The Jazz led 33-23 after 12 minutes as Mitchell hit for eight points in the first quarter and Ingles had seven. San Antonio was led by DeRozan’s nine points in the quarter.

Utah pushed its advantage to 21 points, at 50-29, by running off 17 of the first 23 points of the second quarter. The Spurs answered with a 13-0 run of their own, capped by a pair of free throws by Walker, to get back in the game.

The Jazz led 65-51 at halftime behind Mitchell’s 14 points, along with 12 from Bogdanovic and 10 by Clarkson. Utah outshot the Spurs 51 percent to 43 percent, making 11 of its 22 shots from beyond the arc, and outrebounded San Antonio 37-21.

DeRozan paced San Antonio with 15 points in the half, with Johnson adding 10.

The Spurs made a mini-run at Utah early in the third quarter but could get no closer than 12 points, at 67-55, two minutes into the period. Utah drove the lead to 25 points late in the period and never looked back, taking a 98-76 advantage into the final quarter.

San Antonio played without center LaMarcus Aldridge (sore knee, illness) for the third straight game and without guard Derrick White, who reinjured the toe he had surgically repaired in the offseason, on Friday.