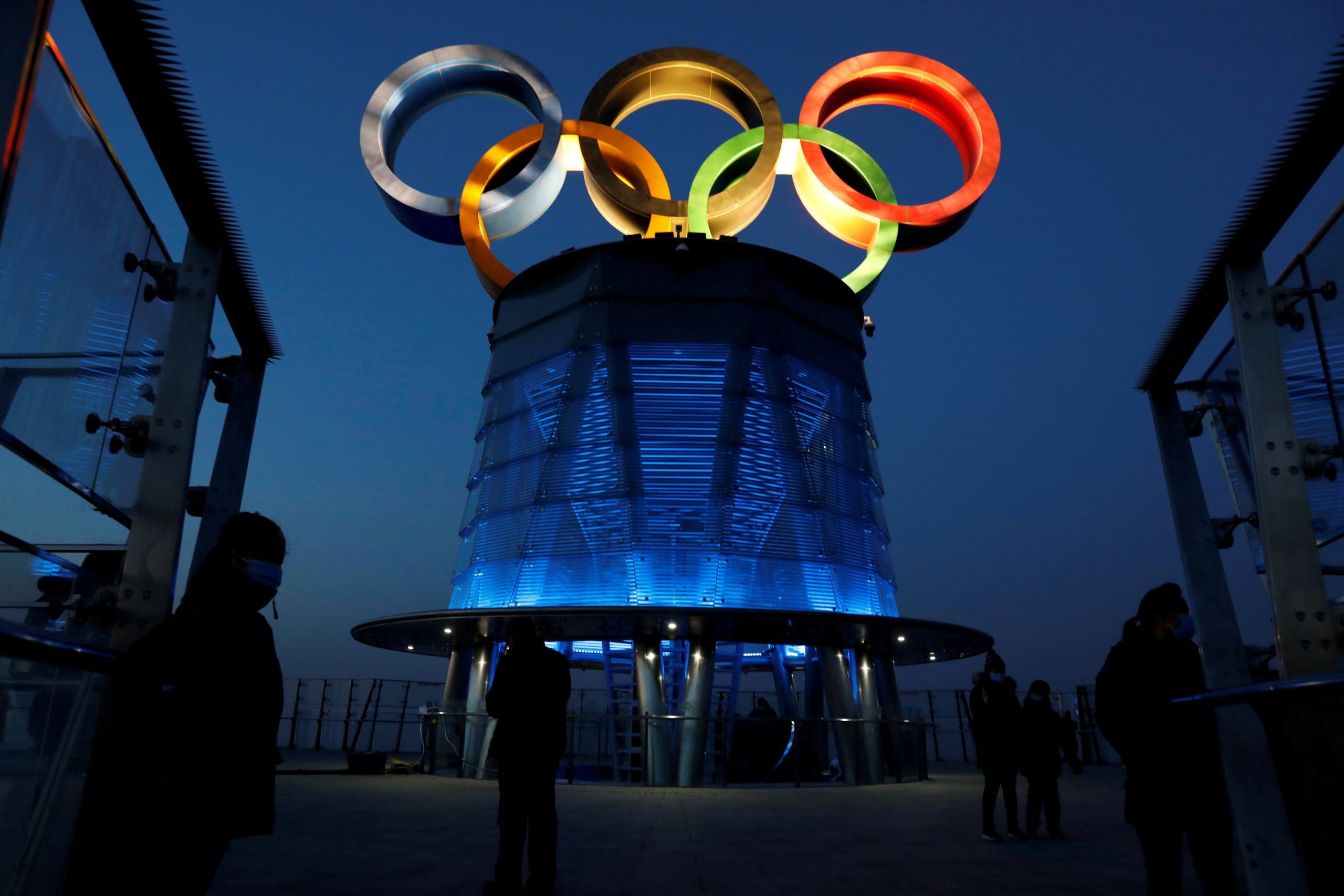 FILE PHOTO: People wearing face masks following the coronavirus disease (COVID-19) outbreak are seen near the lit-up Olympic rings at top of the Olympic Tower, a year ahead of the opening of the 2022 Winter Olympic Games, in Beijing, China February 4, 2021. REUTERS/Tingshu Wang/File Photo

With the Beijing Winter Games less than a year away, the International Olympic Committee (IOC) and Canadian Olympic Committee (COC) are looking closely at human rights abuses in China, Canadian Prime Minister Justin Trudeau said on Tuesday as calls to move the 2022 Games continue to grow.

“In regards to the Olympics, we continue to be very, very vocal in standing up for human rights around the world and calling out human rights abuses, as I have personally in the past directly with Chinese leadership, among many others,” Trudeau told reporters during his daily press briefing.

O’Toole told reporters on Tuesday it was not appropriate for China to host the world’s biggest sporting event in light of its human rights abuses, calling the country’s treatment of the Uighur minority in its Xinjiang region a genocide.

China has been widely condemned for its complexes in Xinjiang, which it describes as “vocational training centers” to stamp out extremism. It denies accusations of abuse.

Paul, meanwhile, urged the Canadian government to support the relocation of the 2022 Winter Olympics set for Feb. 4-20 and for the country to step in as a replacement venue.

“What more evidence does your government need to see before it concludes whether or not a genocide is occurring in China,” said O’Toole calling out the Trudeau Liberals during his morning briefing. “And given we’re even discussing the possibility of a genocide, is Beijing an appropriate venue for the Olympics?”

China’s human rights record has for years been a source of dispute with Western governments. China routinely dismisses Western complaints about its rights record.

With the possibility of a federal election in Canada later this year, O’Toole could be in a far stronger position to decide on the country’s participation in the 2022 Winter Games if elected Prime Minister.

None of the three party leaders, however, mentioned a boycott.

The COC earlier in February came out strongly against boycott rumblings, saying such a move would only punish athletes and do nothing to force a change in China’s human rights record or bring home two Canadian men detained in the country for more than two years.

China’s detention of businessman Michael Spavor and former diplomat Michael Kovrig has become a sore point with Canadians, a July poll finding more than half of those questioned believed Ottawa should take more aggressive action to secure the release of the two men who face spying charges.

Canada views their detention as retribution for the arrest of Huawei Technologies Co Ltd Chief Financial Officer Meng Wanzhou on a U.S. warrant.

“It is in fact the federal government that ultimately decides whether our nation’s athletes will take part in an Olympics,” Paul said in a statement.

“While the Green Party also believes strongly in the power of sport, China has proven itself to be highly resistant to liberalizing human rights.

“The Green Party believes Canada should consider whether it would be feasible to offer itself as an alternative venue for the 2022 Olympics.”

Canada has twice hosted the Winter Olympics, 1988 in Calgary and 2010 in Vancouver.

Read Next
Newest Hotshot Abueva a changed man, says Victolero
EDITORS' PICK
‘FPJ’s Ang Probinsyano’ officially ends after nearly 7 years
Powered by style, innovation and passion
Red-tagged green activist recalls imprisonment
Authors unbowed after gov’t ‘purge’ of books
House energy committee chair Arroyo bats for cheap electricity
A laptop that maximizes your WiFi so you can maximize your productivity
MOST READ
Arjo Atayde reveals proposal to Maine Mendoza was ‘more than a year’ in the making
Man, girlfriend found dead in Leyte river
Jalen Green has no doubt Kai Sotto will make the NBA
Authors unbowed after gov’t ‘purge’ of books
Don't miss out on the latest news and information.