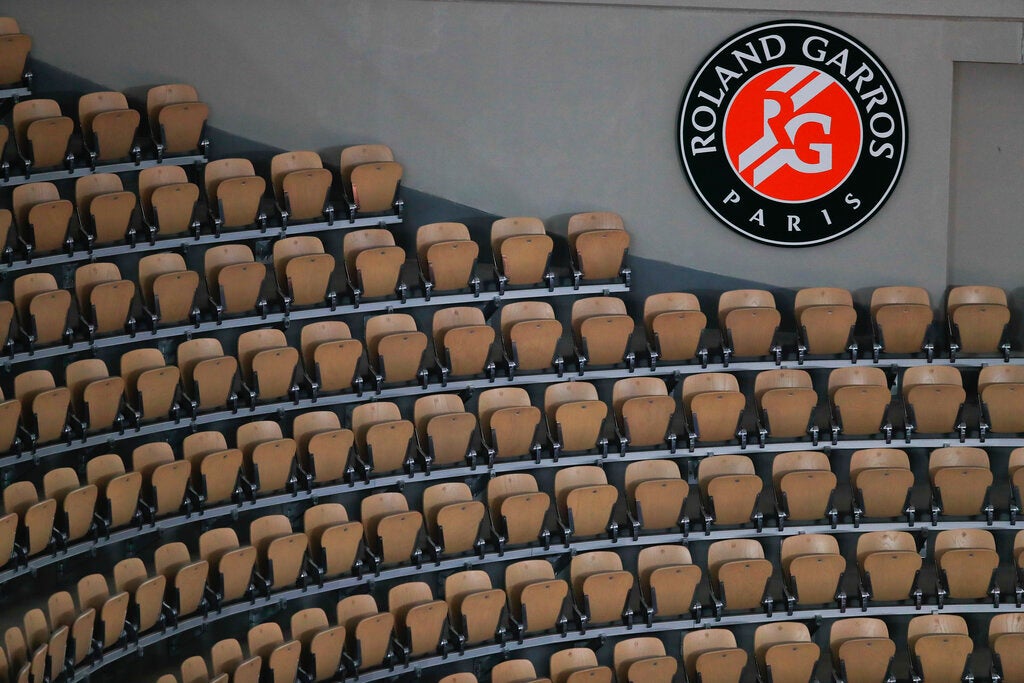 View of rows of empty seats at center court Philippe Chatrier in the first round match of the French Open tennis tournament between Serbia’s Novak Djokovic and Sweden’s Mikael Ymer at the Roland Garros stadium in Paris, France, Tuesday, Sept. 29, 2020. (AP Photo/Michel Euler)

French tennis chief Gilles Moretton told AFP on Wednesday that he “dare not imagine” Roland Garros being canceled as France continues to struggle to contain COVID-19.

“At the moment, we are on track, the tournament is on the scheduled date (May 23-June 6),” said Moretton.

“But if we are told a general confinement for two months, we will necessarily have to take measures — the worst being the outright cancellation, but I dare not imagine that.”

Daily cases of COVID-19 in France have doubled to around 40,000 and hospitals in infection hotspots like Paris are overflowing.

French President Emmanuel Macron on Wednesday said that schools would close next week and a limited lockdown in place in Paris and other regions would be extended to the whole country to battle soaring COVID-19 cases.

Last year Roland Garros was delayed by four months and held in September and October instead of its longstanding May-June slot.

Crowds were limited to just 1,000 spectators each day.

“We are studying a lot of options for Roland Garros 2021,” added Moretton.

“There is the total range … or almost total because I dare not imagine a 100% crowd level.

“But that can start from behind closed doors to a level that will not be 100%. All the options with us are ready.

“We meet all the players regularly and we wait to see how things will turn out.”

Moretton said that organizers will be able to take into account lessons learned from other events leading up to the season’s second Grand Slam event.

The Australian Open, which kicked off the majors season in February, forced players into a two-week hotel quarantine.

“Before us, there are other tournaments like Monte Carlo which takes place on the same territory and which is outdoors.

“After there are tournaments not too far away (Madrid, Rome), so we are not like the situation in Australia.”