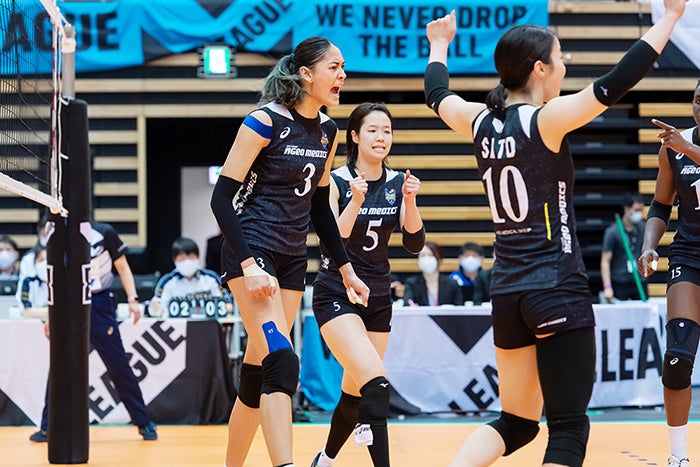 MANILA, Philippines—Jaja Santiago recently made history when she became the first Filipino volleyball player to win a title outside of the Philippines, and she plans to do it again with Saitama.

The 6-foot-5 middle blocker, who helped power the Ageo Medics to a perfect sweep of the Japanese V.Cup en route to the tournament’s title, said she plans to re-sign with the club that she’s already called home.

Santiago already arrived in the Philippines on the evening of Holy Wednesday and is currently under a 6-day quarantine at Vivere Hotel in Alabang.

“Actually my contract ended after the season and they talked to me before I went home to the Philippines and they want me to play next season, and I told them why not,” said Santiago in Filipino in a Zoom conversation Thursday.

“I have a lot of plans for next season but since it’s the [COVID-19] pandemic I felt that I should stay in my comfort zone.”

Santiago, whose mother club in the Philippines is Cherry Tigo, has been with Saitama for four years already and it’s this familiarity with the Ageo Medical Group that made her stay.

The Philippine international said that other teams have courted her but she’s not intent on leaving the club that’s been her home for much of her pro career.

Santiago said that she has spent so much time in Japan that she’s already felt at home in Saitama.

“Other teams in Japan are already trying to sign me but Ageo already has that edge so I feel that I’ll renew with them,” said Santiago.