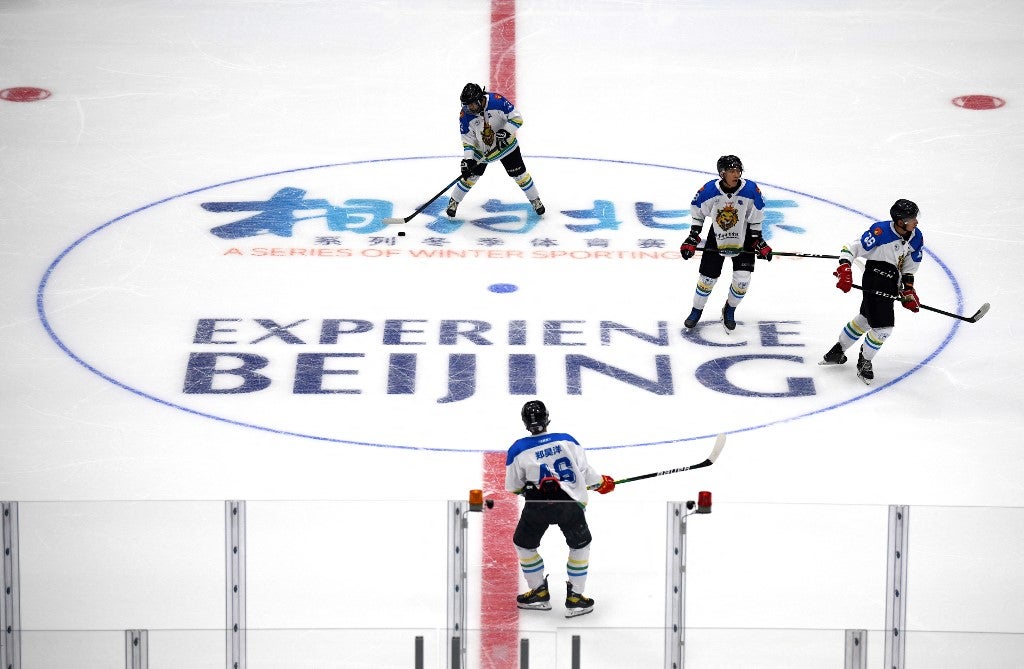 Ice hockey players practise during a test event for the 2022 Beijing Winter Olympic Games at the National Indoor Stadium in Beijing on April 1, 2021. (Photo by Noel Celis / AFP)

The Beijing 2022 Winter Olympics launched a series of test events on Thursday as China plows on with preparations despite calls for a boycott over its treatment of the Uyghur minority.

There are also doubts about how the Games in February next year will deal with the coronavirus — a top Beijing 2022 official recently admitted that the pandemic makes it “a big challenge to host a smooth Winter Olympics.”

Organisers plan to run 10 days of testing at five locations in Olympic and Paralympic sports including ice hockey, speed skating, figure skating and curling. All athletes are Chinese because of virus-related travel curbs.

Among measures at venues to thwart the coronavirus were plastic screens sealing competitors off from the media in the “mixed zone” where interviews are usually done at close quarters. Chinese players take part in a curling test event for the 2022 Beijing Winter Olympic Games at the National Aquatics Center, known as the Ice Cube, in Beijing on April 2, 2021. (Photo by Noel Celis / AFP)

The testing, seen as an important step in getting ready for 2022, comes after IOC president Thomas Bach said in mid-March that a “boycott of the Olympic Games has never achieved anything.”

Campaigners have urged countries to skip the Games and on Thursday a coalition of 200 rights organizations called on confectionery giant Mars Wrigley to pull Snickers — the official Olympic chocolate — from Beijing 2022 “or risk being tainted by association”.

China has come under increasing fire from rights groups and some governments amid claims that actions towards Uyghur and other minority groups in the northwestern region of Xinjiang amount to genocide.

Campaigners say that at least one million Uyghurs and other Turkic-speaking, mostly Muslim minorities are incarcerated in camps in Xinjiang, where China is also accused of forcibly sterilizing women and imposing forced labor.

After initially denying the camps existed, China defended them as vocational training centers aimed at reducing the appeal of Islamic extremism.

China, which is also under scrutiny for its rights clampdown in Hong Kong, has derided the boycott calls as politicizing sport.

Republican calls grow for US to boycott 2022 Winter Olympics