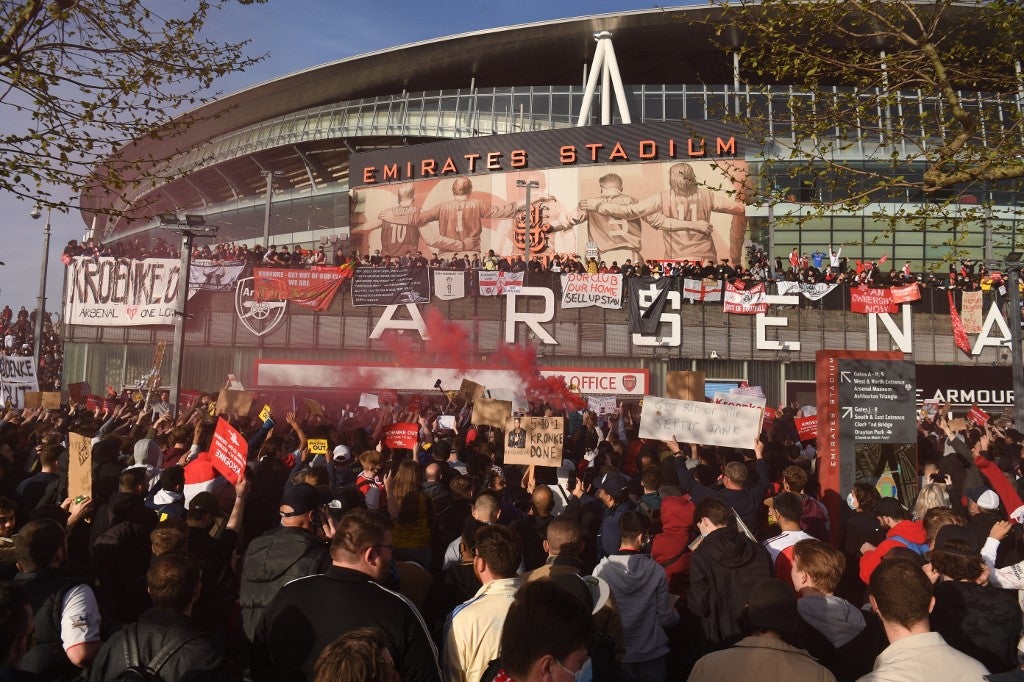 Supporters protest against Arsenal’s US owner Stan Kroenke, outside English Premier League club Arsenal’s Emirates stadium in London on April 23, 2021, ahead of their game against Everton. (Photo by DANIEL LEAL-OLIVAS / AFP)

An own-goal from Arsenal goalkeeper Bernd Leno handed Everton a 1-0 Premier League win on Friday as around 2,000 fans protested against Gunners owner Stan Kroenke outside the Emirates Stadium.

With both sides chasing places in Europe next season, it was Carlo Ancelotti’s side who came out on top with a first win in seven games.

German keeper Leno turned a Richarlison cross into his own goal in the 76th minute to give the Toffees victory.

Arsenal supporters had gathered outside the ground demanding Kroenke stand down after the club’s attempt to join the doomed Super League project.

The result left Everton in eighth place, three points off the Champions League places after their first league win at Arsenal since 1996.

Arsenal are ninth, nine points off the top four.

“It was really important to stay attached to the top of the table,” Ancelotti told the BBC.

“The performance was good. It’s all good news tonight and this gives us confidence for the next games. Finally I can say we are back.”

Everton’s Gylfi Sigurdsson saw a 30-yard free-kick come back off the crossbar.

Arsenal was furious when a second-half penalty, awarded for a foul by Richarlison on Dani Ceballos, was overturned by VAR for an offside in the build-up.

“The penalty is clear, those decisions have been made after, I don’t know how or who by, we cannot see their faces to explain it,” said Arsenal boss Mikel Arteta.