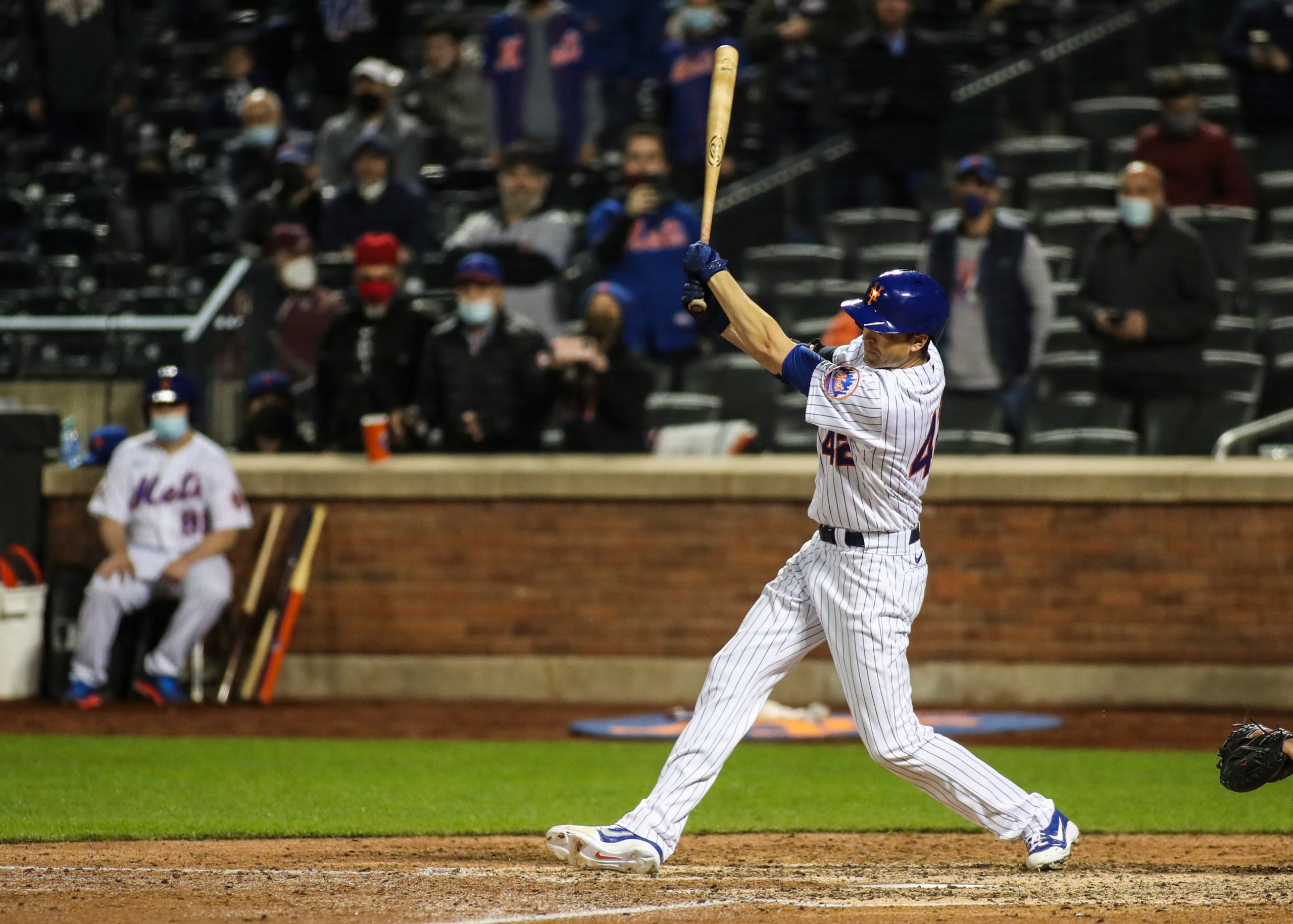 Jacob deGrom continued making history Friday night, when the New York Mets ace struck out a career-high 15 in a two-hit shutout and also doubled home the game’s first run in a 6-0 win over the visiting Washington Nationals.

The Mets snapped a three-game losing streak. The Nationals had a two-game winning streak halted.

deGrom (2-1) allowed a second-inning single to Starlin Castro and a third-inning double to Andrew Stevenson before retiring the final 19 batters. He lowered his ERA to 0.31 in authoring his fourth career complete game and second shutout.

deGrom’s 15 strikeouts increase his season total to 50 — the most ever by a pitcher in his first four starts of the season. The two-time National League Cy Young Award winner became the third pitcher in history to whiff at least 14 batters in three straight starts, joining Pedro Martinez (1999) and Gerrit Cole (2019).

J.A. Happ took a no-hit bid into the eighth inning in Minnesota’s win over Pittsburgh at Minneapolis.

Happ (1-0) allowed two walks and a double by Jacob Stallings to break up the no-hit bid with one out in the eighth. Happ, who was removed right after the hit, struck out three and threw a season-high 95 pitches.

Tyler Duffey pitched a scoreless inning, and Taylor Rogers got the final two outs to sew up the shutout on a combined one-hitter. Willians Astudillo and Jake Cave hit solo homers for the Twins, who had lost four in a row and nine of their previous 10 games.

Oakland headed to the East Coast and knocked off Baltimore for its 12th victory in a row, the first team to win that many consecutive games since Houston did so June 6-18, 2018.

Left-hander Cole Irvin (2-2) scattered eight hits and a walk over 5 1/3 innings to pick up the win. He allowed the Orioles’ run and struck out six. Jake Diekman pitched a perfect ninth for his second save of the season. Ramon Laureano homered for the Athletics.

Tatis’ multi-homer night came 22 years to the day that his father, Fernando Tatis Sr., hit two grand slams in the same inning at Dodger Stadium, both off Chan Ho Park, while playing for the St. Louis Cardinals.

Yadier Molina hit a home run and an RBI double as St. Louis edged visiting Cincinnati, but he exited the game after five innings due to right foot soreness.

Paul Goldschmidt hit a two-run double and Nolan Arenado added an RBI single for the Cardinals, who won for just the fourth time in the last 12 games.

Nick Castellanos hit a homer for the Reds, who lost their fifth in a row. Winning pitcher Kwang Hyun Kim (1-0) allowed Castellanos’ homer but just four other hits in 5 2/3 innings. He recorded a career-high eight strikeouts.

Randal Grichuk also homered as the Blue Jays won for the second time in their last three games despite committing three infield errors. Vladimir Guerrero Jr. singled in the first to extend his perfect mark of reaching base in all of Toronto’s 19 games — the only player in the majors to do so for his club.

Randy Arozarena was 2-for-4 with a three-run homer as the Rays lost their second straight after an impressive 5-1 road trip.

Jake Marisnick homered and tied a career high with five RBIs as Chicago routed visiting Milwaukee in the opener of a three-game series.

Anthony Rizzo, Willson Contreras and Javier Baez also homered for the Cubs, who recorded a season-high 17 hits and extended their winning streak to four games.

Kolten Wong and Billy McKinney hit back-to-back homers in the sixth inning for Milwaukee, which saw its five-game road winning streak come to an end.

Ynoa (1-1) allowed two runs — both coming on Carson Kelly’s two run homer — on two hits, one walk and five strikeouts. Ynoa also had the first two hits of his career, one of them a double, and a single that produced his first career RBI. Will Smith worked a perfect ninth inning to earn his fourth save.

Tapia finished with three hits, and Hampson and Story had two each for the Rockies. Mychal Givens (1-1) pitched one inning for the win.

Rhys Hoskins homered, J.T. Realmuto tripled among his three hits, and Alec Bohm and Nick Maton had two hits apiece for Philadelphia. Tapia was down 0-2 to Hector Neris (1-2) but drove a splitter into the seats in right field to end it.

Robel Garcia stroked a two-out, two-strike single to center field, scoring Jason Castro from third base and providing Houston with a walk-off win in 10 innings over visiting Los Angeles.

Garcia followed an RBI infield single from Myles Straw and a sacrifice fly from Carlos Correa with his hit off Raisel Iglesias (1-2) to complete the three-run frame and the second comeback of the night for the Astros.

The Angels’ David Fletcher and Albert Pujols delivered RBI singles in the top of the 10th off Ryan Pressly (2-0).

Giancarlo Stanton belted a pair of solo homers to lift New York over host Cleveland, erasing an early three-run deficit for the second time in as many days.

Rougned Odor launched a two-run homer and Aaron Hicks added a solo shot for the Yankees, who went deep a season-high four times. Lucas Luetge (1-0) picked up the win, allowing just a walk in 1 1/3 innings in relief of Jordan Montgomery. Aroldis Chapman added his fourth save.

Franmil Reyes had an RBI double and Eddie Rosario and Amed Rosario each drove in a run for the Indians, who have lost three in a row and five of their last six games. Starter Logan Allen (1-3) took the loss, yielding four runs on five hits — including three homers — in 2 1/3 innings.

Alex Wood allowed one hit over seven innings and host San Francisco defeated Miami in the second game of their four-game series.

Marlins rookie shortstop Jazz Chisholm Jr. led off the game with a 427-foot home run to right center field off a 90 mph sinker from Wood (2-0). But he allowed only one more baserunner, a two-out walk to Garrett Cooper in the fourth inning, and struck out seven.

The Marlins lost for the fourth time in their past five games. The Giants have won five six games and have beaten the Marlins three straight times.

Andrew Benintendi and Ryan O’Hearn each hit their first homers of the season, Jorge Soler had a two-run double, and Kansas City topped host Detroit.

Benintendi had two hits and scored twice, while O’Hearn — making his season debut — reached base three times. Whit Merrifield had two hits, a run scored and an RBI.

Robbie Grossman hit a two-run homer to account for the Tigers’ runs. Detroit has lost seven of its last eight games.

Seattle’s Kyle Seager belted a three-run homer off right-hander Matt Barnes with one out in the ninth to pull the Mariners within a run. However, Barnes retired the next two batters to end the game.

Rookie Yermin Mercedes went 4-for-4 with three RBIs, including a go-ahead double in the seventh inning, and Liam Hendriks recorded a five-out save to boost host Chicago to a victory against Texas.

Adolis Garcia homered twice for Texas, including a solo shot with two outs in the ninth that marked the lone blemish against Hendriks.