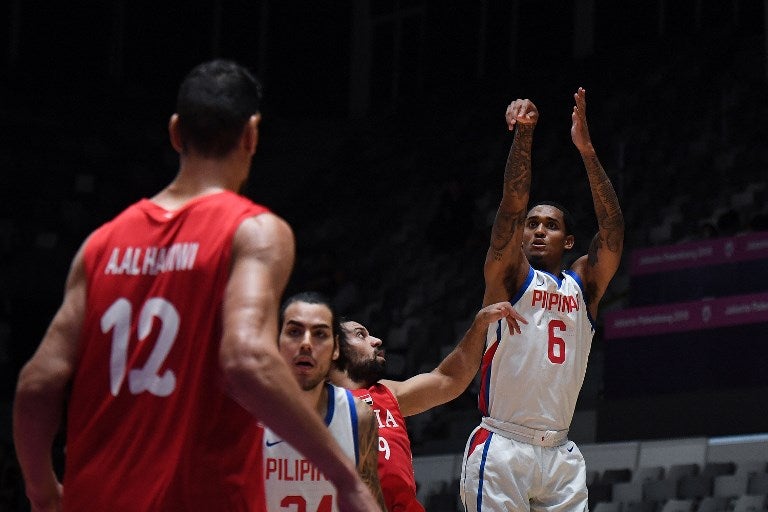 (FILES) This file photo taken on August 31, 2018 shows the Philippines’ Jordan Clarkson (C) shooting against Syria in the men’s basketball 5th and 6th place final match between Syria and the Philippines during the 2018 Asian Games in Jakarta.  (Photo by Lillian SUWANRUMPHA / AFP)

MANILA, Philippines—Utah Jazz guard Jordan Clarkson is willing to suit up for the Philippines once more and he sees that happening in the near future.

During an interview with One Sports’ The Game, the NBA Sixth Man of the Year candidate said that if he’s free from his NBA duties then he can join Gilas Pilipinas in future tournaments.

“Yeah, that’s definitely something I want to do. Hopefully, everything lines up and I’m free that time and that moment and I’ll put that Gilas jersey back on and go win us something,” said Clarkson.

The 6-foot-5 shooting guard previously played for the Philippines during the 2018 Asian Games, after a lengthy discussion between the Samahang Basketbol ng Pilipinas and his then club Cleveland Cavaliers.

Clarkson led the Philippines to a fifth place finish in the basketball competition of the continental meet, the country’s best in 16 years.

The Asian Games stint needed a lot of lobbying from the SBP that time with Clarkson still considered as a foreign player under Fiba rules as he doesn’t have a Philippine passport before turning 16-years-old.

Clarkson can still play for the Philippines in Fiba competitions but he will be a naturalized player despite having a Filipina mother.

Nevertheless, Clarkson still has a massive pull on the Philippine market.

“I feel it all the time. I always see the flag, puso (heart), everything. Just love and support every time I check my phone, it’s amazing,” said Clarkson. “One year, I had a bunch of All-Star votes for me. Hopefully next year, I put on another great campaign, and you guys vote me in the All-Star Game if I play at that level.”