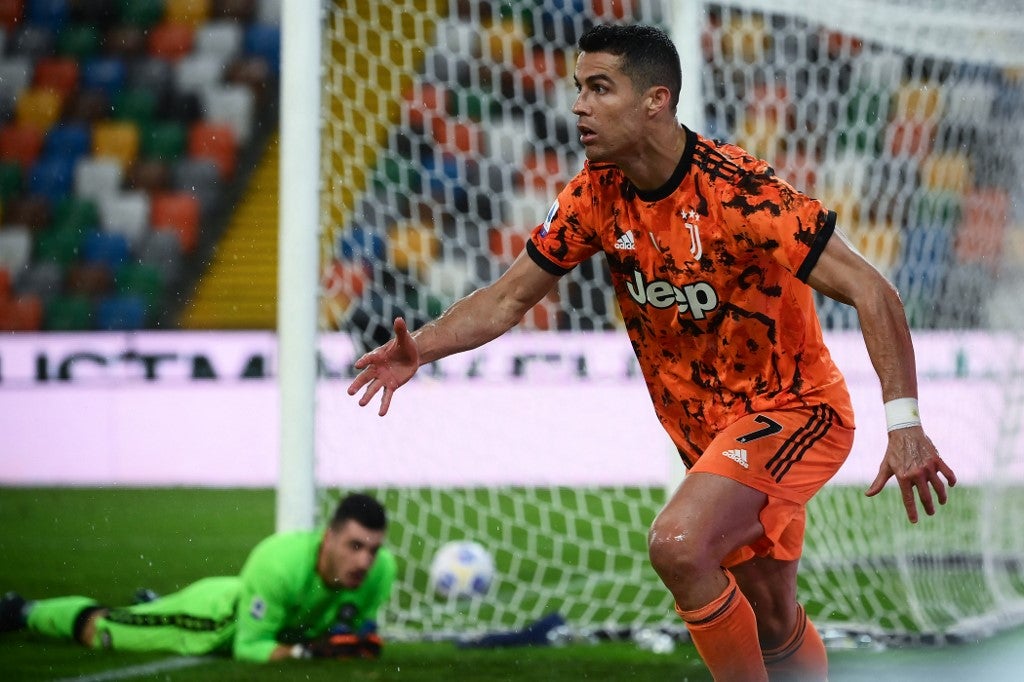 Juventus’ Portuguese forward Cristiano Ronaldo celebrates after scoring a goal during the Italian Serie A football match between Udinese and Juventus at the Dacia Arena Stadium in Udine, on May 2, 2021. (Photo by MARCO BERTORELLO / AFP)

Cristiano Ronaldo scored twice late to rescue a 2-1 win for Juventus at Udinese on Sunday hours after the Turin giants lost their Serie A crown to Inter Milan.

Antonio Conte’s side had needed just one point to take the title regardless of how Atalanta fared after its 2-0 win at Crotone on Saturday, and have denied Juve a 10th consecutive league triumph.

Juve’s win moves them up to third as it targets a Champions League spot, but is equal on 69 points with second-placed Atalanta and AC Milan in fourth.

Napoli is two points behind in fifth after a 1-1 draw against Cagliari while Lazio is still in the running, five points off a top-four finish with a game in hand after an exciting 4-3 win over Genoa.

“The nine years are over, we will no longer have the Scudetto attached to the shirt, but we will start again with the same desire as before,” said Juve coach Andrea Pirlo.

“We earned this win with effort and pride, and it’s a very important one given the other results this afternoon.

“We lost points against teams that we should have beaten, sometimes naively, we let Inter escape and now we are focused on reaching the Champions League.”

Juventus had trailed for most of the game in Udine after Nahuel Molina put Udinese ahead in the 10th minute, blasting in off a quickly taken Rodrigo De Paul free-kick while Juventus players were still protesting.

Weston McKennie missed a chance to level for the away side before the half hour mark when he sent a diving header wide.

Matthijs de Ligt had a shot charged down with Ronaldo nodding over the follow-up.

The equalizer came with seven minutes to go after De Paul conceded a penalty for handball from a Ronaldo free-kick, with the Portuguese forward making no mistake from the penalty spot.

Four minutes later he grabbed the winner when he headed home an Adrien Rabiot cross, with relieved coach Andrea Pirlo racing to join the celebrations.

In Emilia-Romagna, Atalanta played most of the match a man down after goalkeeper Pierluigi Gollini saw red after 22 minutes at the Mapei Stadium.

Domenico Berardi pulled Sassuolo level from the penalty spot seven minutes after the break after Hamed Traore went down in the penalty box under pressure from Rafael Toloi.

Sassuolo also played the final quarter of an hour with 10 men after Brazilian defender Marlon was sent off for a second yellow card, but goalkeeper Andrea Consigli saved Muriel’s penalty to hand Inter the title.

In Naples, Nahitan Nandez got a late equalizer for relegation-threatened Cagliari to cancel out Victor Osimhen’s 13th-minute opener.

Joaquin Correa scored a brace, breaking the deadlock after half an hour and striking again 11 minutes after the break.

Ciro Immobile added the second from the penalty spot before half-time after an Ivan Radovanovic foul.

Genoa got back into the game when under-pressure Lazio defender Adam Marusic turned into his own net.

Luis Alberto curled in a third for the hosts just after with Correa then making it 4-1.

The hosts survived a late scare as Genoa fought back with Gianluca Scamacca slotting in a penalty with 10 minutes to go and Eldor Shomurodov blasting in another goal almost immediately afterward.

Roma extended their winless run to four games with a 2-0 defeat at Sampdoria to slip to nine points off the Europa League berths.