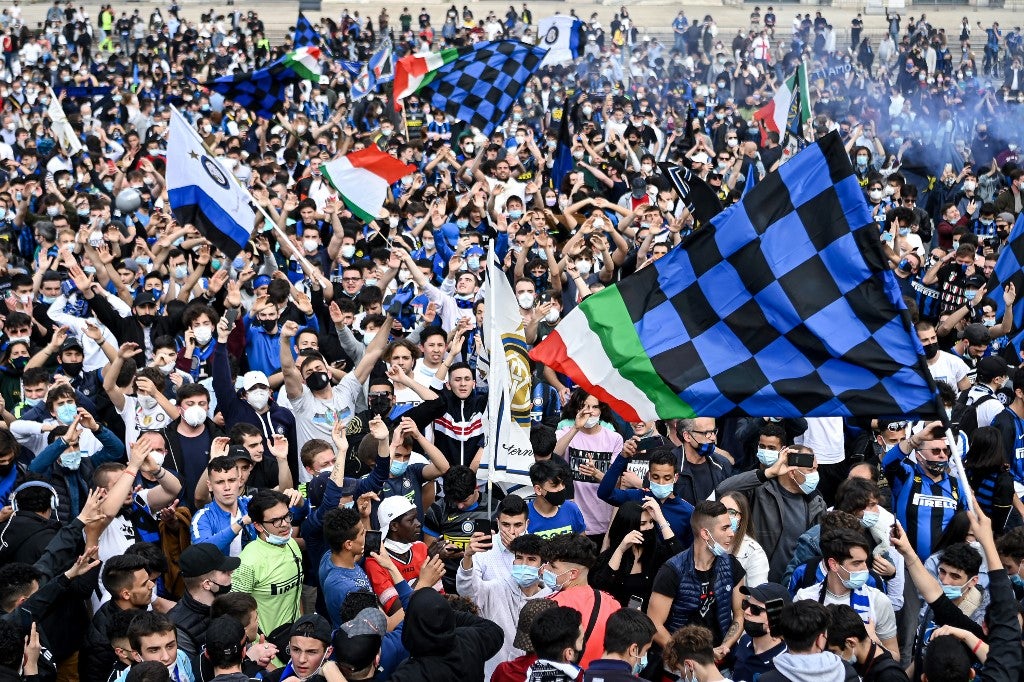 FC Internazionale supporters celebrate at Piazza Duomo in Milan on May 2, 2021, after the team won the Italian Serie A Championship title. (Photo by Piero CRUCIATTI / AFP)

Thousands thronged onto the Milan streets on Sunday as Inter claimed a first Serie A title in 11 years to end rival Juventus’ nine-year reign.

Antonio Conte’s side clinched its 19th Scudetto after Atalanta drew 1-1 at Sassuolo to leave the ‘Nerazzurri’ 13 points clear with four games remaining.

Conte had started Juve’s record run, winning the first three titles in a streak that stretched from 2012 to 2020.

The 51-year-old took over Inter in 2019 and lifted the trophy against their bitter rivals after finishing second last season.

“This triumph is one of the biggest achievements in my career,” said Conte, who also won the Premier League with Chelsea in 2017.

“It wasn’t an easy choice for me to go to Inter, at a time when the team wasn’t used to winning. They were also the direct rival of Juventus, my former club.”

Inter is now the second most successful team in Italy, one league success ahead of bitter city rival AC Milan’s 18, but still some way short of Juve’s 36.

The Lombardy side had not won the title since Jose Mourinho’s historic Champions League, Serie A and Coppa Italia treble in 2010.

Their last trophy was the Coppa Italia in 2011 and they missed out on the Champions League for six seasons before Luciano Spalletti took them back to Europe’s top club competition in 2018.

Conte is the 13th coach since Mourinho to sit on the Nerazzurri bench and the club has changed hands twice over the past decade.

It is the first time that a foreign-owned Italian team has won the league title.

“It’s emotional, and a special time for everyone involved in this project and who has been with us on this journey,” said Inter president Steven Zhang.

“To our fans throughout the world, in Milan and in Italy, this Scudetto is for you.

“The future of Inter, of the project and of the Inter world is the same as it has been for 100 years and it will always be this way.”

Inter targeted Conte to pull off what he had done at Juve, who had finished seventh in the two previous seasons before his arrival in 2011.

Former Juve director Giuseppe Marotta, who had worked alongside Conte in Turin, joined Inter as CEO for sport in 2018.

In addition to Conte’s reported annual salary of 12 million euros ($14.4 million) Inter splashed nearly 220 million euros on transfers in 2019 after his arrival.

Conte has turned the outfit into a competitive unit again after two fourth-place finishes under Spalletti.

Despite a mixed start to this campaign behind closed doors amid the coronavirus pandemic, Conte found the winning formula and Saturday’s 2-0 win at Crotone stretched their unbeaten run to 18 games.

Crashing out of the Champions League in the group stage in December for the third consecutive season proved a spur to focus on the league.

“The key moment was in the week after we got knocked out of the Champions League,” explained Conte.

“We were criticized from all sides, in an exaggerated manner. This was a group of lads that weren’t used to competing on all fronts.

“We did really well to band together and to take these excessive criticisms on the chin.”

A 2-0 win over Juventus in January fuelled their ambitions, followed by a 3-0 success over AC Milan in February to pull ahead in the table.

Spearheaded by Belgium forward Romelu Lukaku and Argentina attacker Lautaro Martinez Inter cemented their title credentials with a run of 11 consecutive wins before being held by Napoli on April 18.

The triumph ends Juve’s golden era with the unsuccessful gamble on coaching novice Andrea Pirlo, who played under Conte and took over from Maurizio Sarri last summer.

The demise of a reign which followed the ‘Calciopoli’ match-fixing scandal and relegation to Serie B in 2006, sees Juventus now fighting for a top-four finish and Champions League football next season.

“We’ll be back,” warned Juve president Andrea Agnelli on Twitter.

The Champions League will be Inter’s new challenge, having failed to reach the last 16 since the 2011/12 season.

However, the future ownership of the club remains in doubt with Inter making losses of 100 million euros last season mainly due to the coronavirus pandemic.

The Suning Group shut down their Chinese club Jiangsu FC in February just months after it won the Chinese Super League title.