May 12, 2021; St. Petersburg, Florida, USA; New York Yankees starting pitcher Gerrit Cole (45) looks on as he walks back to the dugout at the end of the sixth inning against the Tampa Bay Rays at Tropicana Field. Mandatory Credit: Kim Klement-USA TODAY Sports

New York’s Gerrit Cole crafted eight brilliant innings to finally solve Tampa Bay in the regular season, and the Yankees secured another series Wednesday night with a 1-0 victory over the Rays in St. Petersburg, Fla.

Cole (5-1) yielded only four hits, struck out 12 and did not issue a walk in moving to 1-4 in his career against the Rays in the regular season. He is 3-0 against Tampa Bay in the playoffs, however.

The right-hander lowered his ERA to 1.37 and has 78 strikeouts and just three walks in 52 2/3 innings pitched.

Aaron Hicks’ sacrifice fly in the seventh scored Aaron Judge with the only run as the Yankees improved to 5-0-2 in the past seven series. Amed Rosario delivered a two-out, run-scoring single in the 10th inning to give Cleveland a victory and a two-game sweep of visiting Chicago.

Josh Naylor, who began the inning at second base, scored from third base on Rosario’s single to right field off Keegan Thompson (1-1).

Rosario had four hits and two RBIs for the Indians, who have won eight of their past nine games. Cleveland used six relievers, including winning pitcher James Karinchak (1-0). Nine of Chicago’s past 10 games, and each of the last seven, have been decided by one run. 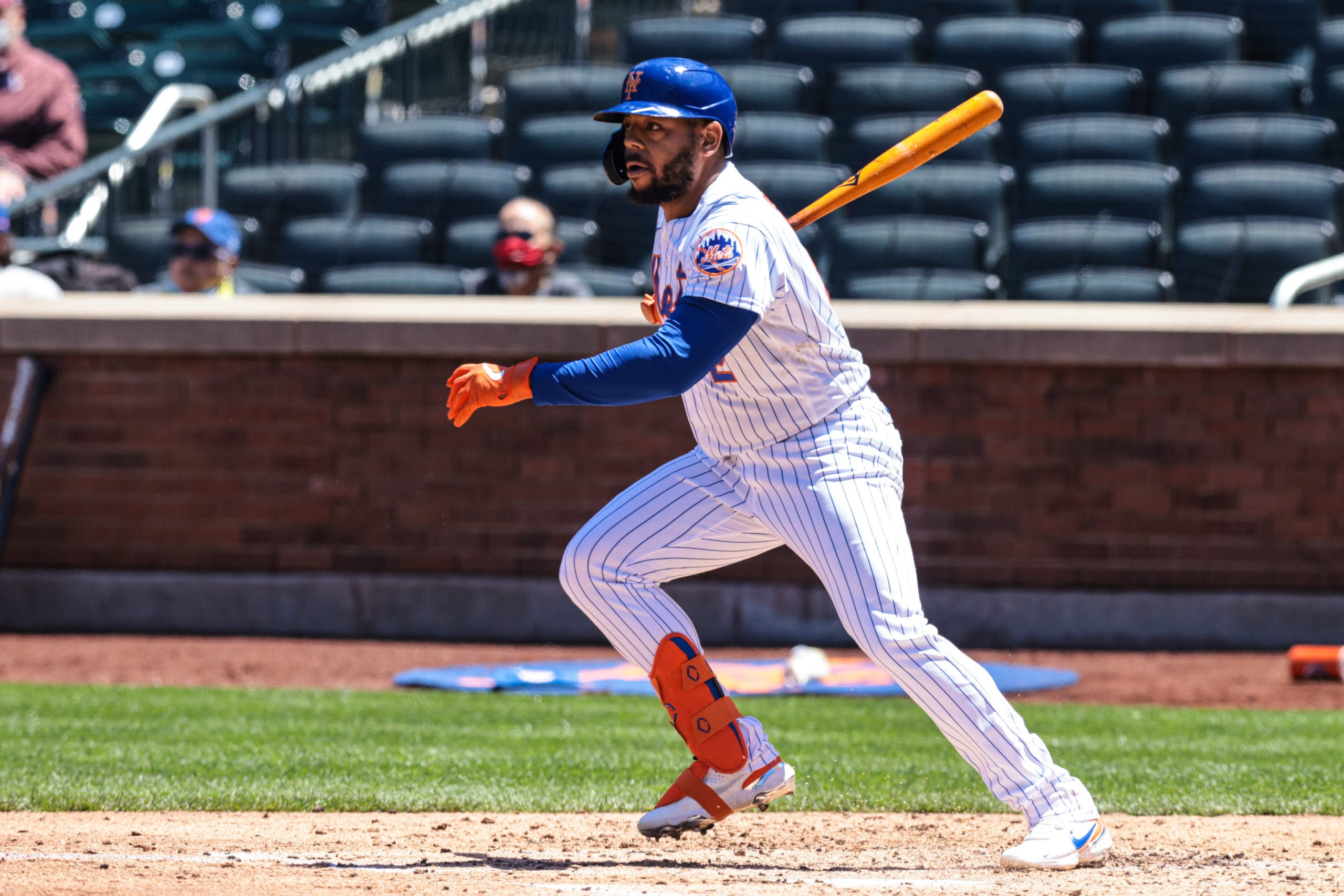 Taijuan Walker out-dueled Harvey and the Mets completed a brief interleague sweep of the Orioles. New York went 5-0 on a homestand against the Orioles and Arizona Diamondbacks and has won seven straight. Baltimore has lost five of six.

James Kaprielian pitched out of a pair of jams to win his first major league start as Oakland downed host Boston.

Matt Olson homered for the Athletics, who will look to complete a three-game sweep Thursday. Oakland has won four of five. Marwin Gonzalez slugged a pair of doubles for the Red Sox, who were held to five hits. Boston has dropped three straight for the first time since beginning the season 0-3.

Jesse Winker hit an RBI single and Eugenio Suarez delivered a three-run double in the 10th inning to give visiting Cincinnati a win over Pittsburgh.

At 1-1 in the top of the 10th against Pittsburgh reliever Duane Underwood Jr. (1-2), Nick Senzel started at second base. Winker smacked a single to left, with Senzel scooting home for a 2-1 Reds’ lead.

Nick Castellanos sent Winker to third with a base hit to right and Mike Moustakas walked to load the bases. With the Reds out of position players, Wade Miley — a starter making his first appearance since he threw a no-hitter Friday — pinch hit and popped out. Suarez followed with a bases-clearing double to the wall in left-center to make it 5-1.

After Shaw put the Brewers in front, Avisail Garcia broke the game open with a two-run homer. The Cardinals had tied the game 1-1 in the top of the eighth on a Tyler O’Neill homer.

Milwaukee starter Brandon Woodruff yielded one run on three hits and a walk in 7 2/3 innings. He struck out 10. Devin Williams (1-0) retired the only batter he faced and got the win, and Josh Hader escaped a ninth-inning jam for his eighth save.

Victor Caratini hit a go-ahead grand slam in the sixth inning and San Diego beat Colorado in Denver in Game 1 of a doubleheader.

Emilio Pagan (3-0) pitched one inning for the win and Mark Melancon worked out of a bases-loaded jam in the seventh for his 12th save for San Diego.

The Padres won it with a big sixth inning. Tommy Pham drew a one-out walk and Tucupita Marcano reached on a fielder’s choice. Starter Jon Gray walked Patrick Kivlehan with two outs, ending Gray’s day. Caratini then lined reliever Robert Stephenson’s 2-0 fastball over the scoreboard in right to make it 5-1.

Josh Fuentes hit a walk-off single in the eighth inning and also homered, and Colorado beat San Diego in Denver in the second game of a doubleheader.

Yonathan Daza had two hits and right-hander Yency Almonte (1-1) pitched the eighth for the Rockies, who stopped a five-game skid.

Austin Nola had two hits for the short-handed Padres, whose modest three-game winning streak came to an end.

Ryu (3-2) allowed one run on five hits, one walk and six strikeouts. It was the second time he has worked seven innings, the best on the club. He threw a first-pitch strike to 21 of the 27 batters faced.

Billy Hamilton matched a career high with four hits and finished a home run short of the cycle as host Chicago powered past Minnesota for its fifth consecutive win.

Chicago’s Jose Abreu had a run-scoring triple among his two hits and three RBIs, and rookie Andrew Vaughn drilled his first major league homer. The White Sox out-hit the Twins 14-13 and scored at least nine runs for the fifth time in seven games.

Josh Donaldson paced the Twins’ attack, going 3-for-5 with three RBIs. Minnesota grabbed a 1-0 lead on Nelson Cruz’s solo home run in the first inning, but the Twins struggled to keep up with Chicago’s firepower after that, losing for the sixth time in seven games.

Rhys Hoskins drove in the go-ahead run in the 10th inning and visiting Philadelphia added two more to defeat Washington.

Andrew McCutchen started the 10th on second base and Bryce Harper led off with a single to left off Brad Hand (2-2), moving McCutchen to third. Kyle Finnegan relieved Hand and Hoskins singled to left, scoring McCutchen.

Starlin Castro had four hits for Washington and extended his hitting streak to 10 games. Washington went 1-for-13 with runners in scoring position and dropped its fourth straight game.

Brandon Bielak pitched 3 1/3 effective innings after being summoned unexpectedly from the bullpen as Houston won the rubber match of its three-game set against visiting Los Angeles.

Astros starter Jose Urquidy threw 3 1/2 scoreless innings before exiting due to right shoulder discomfort. Bielak came on and gave up just one run on two hits and a walk with two strikeouts.

Poteet, 26, went five innings, allowing four hits, no walks and two runs while striking out six as the Marlins snapped their four-game losing streak, which tied a season high. Four Marlins relievers — including Yimi Garcia in the ninth — combined to pitch four scoreless innings. Garcia earned his sixth save of the year in seven chances.

Miami’s offense was led by Jesus Aguilar, who slugged a two-run homer, and Sandy Leon, who hit a solo shot. All nine of Aguilar’s homers this season have come on the road. Rookie pinch hitter Andrew Young homered for Arizona. It was Young’s fourth hit this year, all of them homers, in 10 at-bats.

Matt Beaty drove in three runs for the Dodgers, who had failed to win six consecutive series before the Mariners came to town. The series drought started with a two-game split at Seattle on April 19-20 before Los Angeles dropped its next five sets.

Dylan Moore drove in a run for the Mariners, who were held to a pair of singles while taking their fourth straight loss. Seattle starter Justin Dunn (1-1) lasted just 3 1/3 innings, giving up two runs on three hits with three walks and two strikeouts.

Mize, who made his career debut last season, tossed six innings and allowed two runs on three hits with four strikeouts and two walks. His only previous victory came at Houston in April.

Jonathan Schoop had three hits and scored a run, and Jeimer Candelario contributed a double, a run scored and an RBI for the Tigers, who have won three straight.