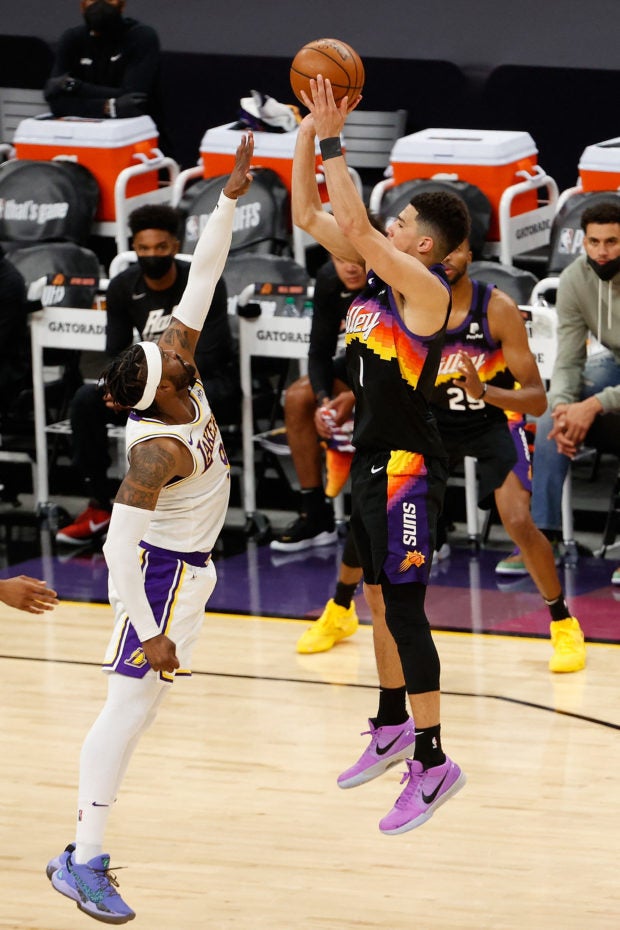 Devin Booker  of the Phoenix Suns attempts a shot over Wesley Matthews #9 of the Los Angeles Lakers during the first half of Game One of the Western Conference first-round playoff series at Phoenix Suns Arena on May 23, 2021 in Phoenix, Arizona.  (Getty Images via AFP)

Booker — playing in the first NBA playoff game of his career — spearheaded a deserved win over the reigning NBA champions, rallying his team after an injury to Chris Paul restricted the Phoenix veteran’s influence.

Booker was backed by Deandre Ayton, who contributed 21 points and 16 rebounds, while Mikal Bridges and Cameron Johnson added 10 points apiece for Phoenix.

A physical encounter saw the Suns’ Cameron Payne ejected in the fourth quarter after a shoving match which saw players and backroom staff stream onto the court as tempers flared.

The Lakers, meanwhile, struggled to hit their stride throughout, with LeBron James finishing with 18 points and Anthony Davis restricted to 13 points after making only five-of-16 from the field.

Barring an early spell in the first quarter when the Lakers led by five points, the Suns led throughout, maintaining a double-digit cushion for much of the second half and leading by 16 points early in the fourth.

“It was a big win for us,” Booker said, revealing that the early injury to Paul had galvanised the Suns.

“Chris went down early and I think that got our team locked in and understanding that every possession matters. We huddled up and said we’ve all got to give a little bit more.

“Chris has carried us this season and helped us to a lot of wins so we rallied behind him as brothers and it worked out well for us.”

Booker said the Suns would be bracing for a Lakers backlash in game two in Phoenix on Tuesday.

“They’re the defending champs. We know they’re going to come out and be ready to go — and I think we will be too,” Booker said.

In other games on Sunday, Tobias Harris erupted for 37 points as the top-seeded Philadelphia 76ers shut down the Washington Wizards to win their Eastern Conference first round series opener 125-118.

Harris delivered a 28-point first half display to get the Sixers off to a flying start and Joel Embiid added 30 points from just 30 minutes on court to steer the Sixers to a home victory in the best-of-seven series.

Seth Curry had 15 points and Danny Green added 11 for Philadelphia. Ben Simmons was limited to just six points but hauled down 15 rebounds and handed out 15 assists. 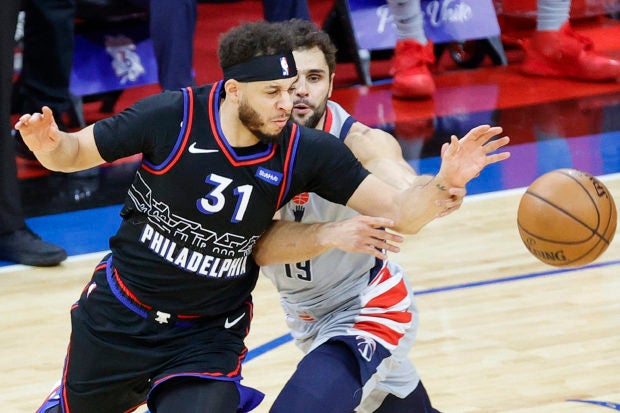 Seth Curry  of the Philadelphia 76ers and Raul Neto #19 of the Washington Wizards reach for the ball during the third quarter during Game One of the Eastern Conference first round series at Wells Fargo Center on May 23, 2021 in Philadelphia, Pennsylvania.  (Getty Images via AFP)

The game swung decisively in the Sixers’ favor in the third quarter, when the hosts overturned a five-point deficit before stretching away to lead by 11 early in the fourth.

“I wanted to set the tone early on,” Harris said of his explosive first-half.

“We wanted to show what we’re about all year. We know this playoff run is going to be as tough as they get and we’ve just got to bring the energy and bring the fire each and every night.”

Harris said the 76ers had consciously tightened defense after the Wizards’ Russell Westbrook and Bradley Beal got into an early scoring groove in the first half.

“They’ve got a super dynamic back court with Bradley Beal and Russell Westbrook, so we wanted to limit them from making shots,” Harris said.

“We thought in the first half there was too many blow-bys in transition, and too many easy baskets. So we just felt for us it was about locking in defensively in the second half. We know we’ve gotta be better.”

Beal led the Wizards scorers with 33 points, 10 rebounds and six assists while triple-double king Westbrook was held to 16 points with 15 assists and five rebounds.

Game two in the series takes place in Philadelphia on Tuesday.