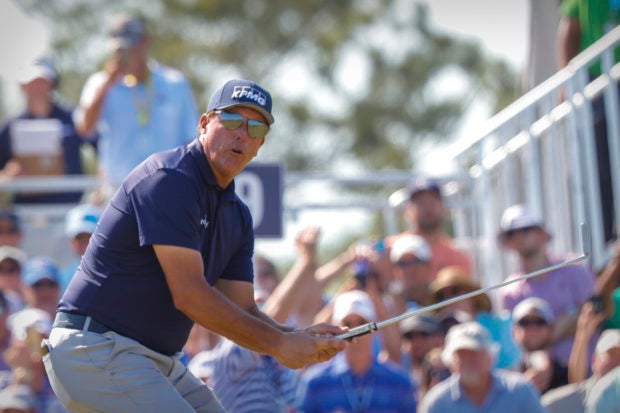 Phil Mickelson reacts to missing a putt on on the 9th green during the final round of the PGA Championship golf tournament. (USA TODAY Sports)

KIAWAH ISLAND, S.C. – Phil Mickelson turned back the clock to secure a two-shot victory over Brooks Koepka and South African Louis Oosthuizen at the PGA Championship on Sunday and become the oldest major winner in history aged 50.

Mickelson, who began the day with a one-shot lead over Koepka, put the finishing touches on one of the most impressive feats in golf with a one-over-par 73 at the Ocean Course that left him at six under on the week.

When Mickelson’s approach shot safely found the green at the final hole a wild scene ensued as adoring fans raced to follow one of the game’s all-time greats up the fairway and completely enveloped him in a frenzied swarm.

Security officials eventually had to step in to create a narrow path for Mickelson to navigate his way to forward where he two-putted from 16 feet (4.9 metres) to seal the win.

“This is just an incredible feeling because I just believed that it was possible but yet everything was saying it wasn’t,” said Mickelson, who is also now the only player to have gone 30 years between his first and last PGA Tour victory.

“And I hope that others find that inspiration. It might take a little extra work, a little bit harder effort to maintain physically or maintain the skills but, gosh, is it worth it.”

By collecting the sixth major of his career and first since the 2013 British Open, Mickelson surpassed Julius Boros, who was 48 years old when he won the 1968 PGA Championship, as the oldest major winner.

After an eventful front nine that produced twists and turns at seemingly every hole, it was fan-favourite Mickelson who emerged two shots clear at the turn and soaking up energy from the limited spectators in attendance at the year’s second major.

Mickelson moved three shots clear after a birdie at the par-four 10th and the final stretch was more a coronation than a dogfight as four-times major champion Koepka and 2010 British Open winner Oosthuizen ran out of holes.

Mickelson, who led by five shots with six holes to play, did see his lead cut to two shots after bogeys at the 13th and 14th compounded by a birdie at the 16th by Oosthuizen, who was playing in the penultimate pairing.

“I tried to be as aggressive as I could without doing stupid things,” said Oosthuizen, who did well to get back into the mix even after a double-bogey at the par-four 13th where his third shot landed in the water.

“I felt like I had to be aggressive to give myself maybe a 15-footer for par and just caught it off the heel, and if it’s windy like that in a crosswind, you know the wind is going to take it into the water.”

With victory in sight, an undeterred Mickelson showed great resolve and even flashed a thumbs-up to the crowd as he went on to reclaim a three-shot cushion with a birdie at the 16th before a bogey-par finish.

“Truly inspirational to see @PhilMickelson do it again at 50 years of age. Congrats!!!!!!!,” 15-times major champion Tiger Woods, who is home recovering from serious leg injuries suffered in a February car crash, wrote on Twitter.

Northern Irishman Rory McIlroy, who won the PGA Championship at Kiawah Island in 2012 and was a favourite this week, closed with an even-par 72 that left him at five over par.