Lakers look to bounce back in Game 2 against Suns 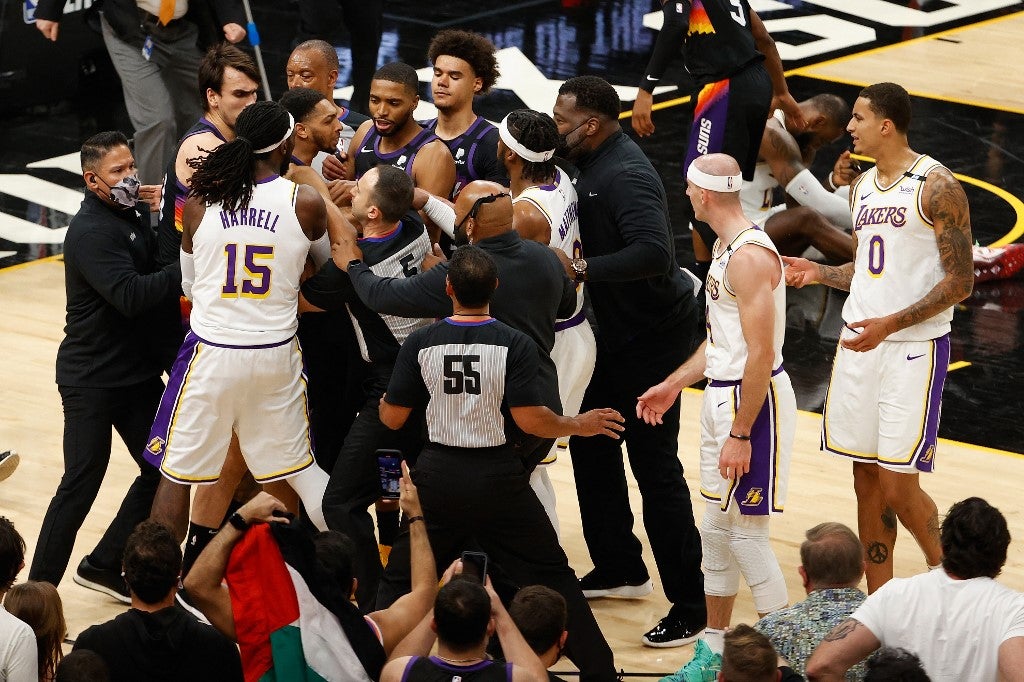 FILE — Montrezl Harrell #15, Alex Caruso #4 and Wesley Matthews #9 of the Los Angeles Lakers come together with Dario Saric #20, Cameron Payne #15 and Mikal Bridges #25 of the Phoenix Suns in an altercation during the second half of Game One of the Western Conference first-round playoff series at Phoenix Suns Arena on May 23, 2021. Christian Petersen/Getty Images/AFP

Now that the Phoenix Suns have shown they are not afraid of the playoff spotlight, maintaining that edge becomes the goal as they move forward in their first-round Western Conference series against the Los Angeles Lakers.

Game 2 takes place at Phoenix on Tuesday, two days after the Suns set the tone with a 99-90 victory in Game 1, where the Lakers wouldn’t even give themselves credit for scoring that many points.

Caruso’s late launch with 6.7 seconds remaining on the clock was merely window dressing. Or perhaps, the Lakers can use it as a starting point while moving toward Game 2.

With plenty of playoff experience on the roster, especially from LeBron James, the Lakers are well aware that one loss, or even one poorly played game, does not make a series.

Los Angeles only has to look back as far as the first-round opener last season when they fell in a similar fashion. The Lakers dropped a 100-93 decision to the Portland Trail Blazers and went on to win the next four games and advance.

Less than eight weeks after that lackluster opening-game defeat, the Lakers were holding the championship trophy.

James’ 18 points Sunday were a Lakers high as he shot 6 of 13 from the field. Afterward he reacted to the defeat with somewhat of a shrug and a nod to being in this position before.

“It gives me a real advantage to be able to dissect a team; you know what we did wrong in the previous games,” James said. “Game 1 has always been a feel-out game for me.”

Both James and the Suns’ Chris Paul came away with shoulder injuries in Game 1. Paul even left the game for a stretch, returning later and appearing to be less aggressive as a scoring threat. James played through his shoulder ache after a hard box out by Paul and said he’s good to go on Tuesday.

Paul figured to set a scoring tone for the Suns, just as he has done all season in big games. His three highest-scoring games since the start of April have come against the Utah Jazz, Brooklyn Nets and Los Angeles Clippers.

But Paul ended up with just seven points on eight shots Sunday, while Cameron Payne was ejected following a second-half skirmish with Alex Caruso and Montrezl Harrell following the James injury.

Devin Booker, though, looked comfortable in his first career playoff game with 34 points on 13 of 26 shooting from the field and 3 of 7 from 3-point range.

Suns big man Deandre Ayton, also in his first career playoff game, didn’t shy away from the pressure with 21 points and 16 rebounds.

“We did well (Sunday), but it’s one game,” Booker said. “No matter how much we won by, no matter how we played, Game 2 is going to be a whole different opportunity. It’s obvious what (the Lakers) are capable of, and we just try to make it tough on them.”

Lakers’ LeBron to face no action over COVID-19 protocol violation