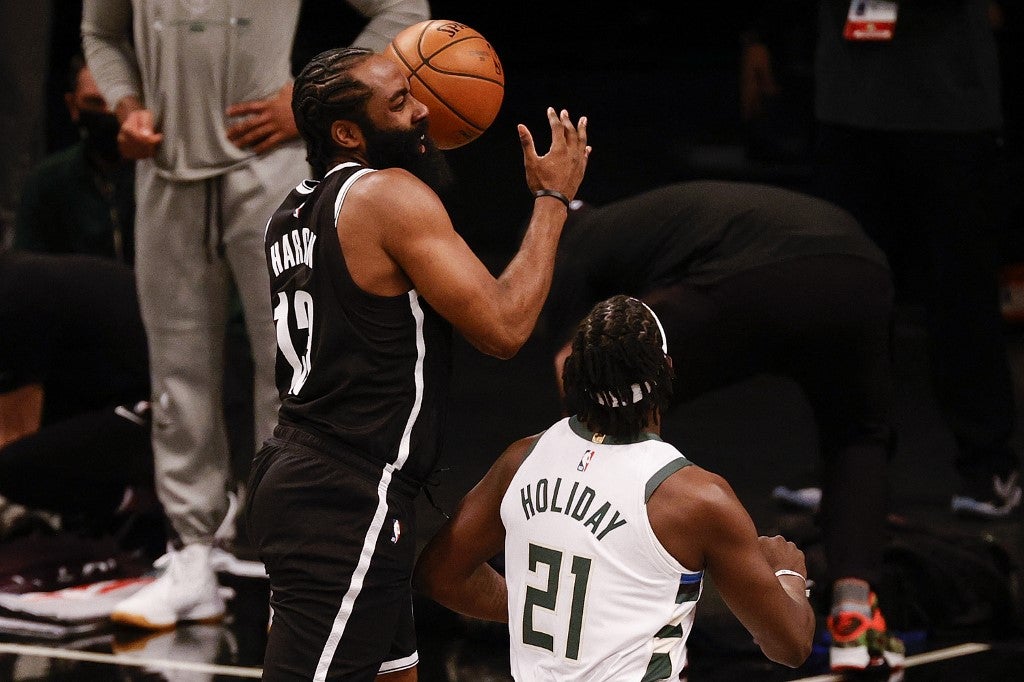 NEW YORK, NEW YORK – JUNE 05: James Harden #13 of the Brooklyn Nets drives to the basket during the first quarter against the Milwaukee Bucks during Game One of the Eastern Conference second round series at Barclays Center on June 05, 2021 in New York City. Tim Nwachukwu/Getty Images/AFP (Photo by Tim Nwachukwu / GETTY IMAGES NORTH AMERICA / Getty Images via AFP)

Brooklyn Nets guard James Harden exited Game 1 of the Eastern Conference semifinals against the Milwaukee Bucks due to a right hamstring injury in the opening minute of the first quarter on Saturday.

The Nets announced he will not return. TNT reported that Harden left the arena to get an MRI.

Harden appeared to injure himself driving on Milwaukee’s Jrue Holiday and passing the ball to Blake Griffin. He grabbed his right hamstring and gingerly walked up the floor before the Nets called a timeout 43 seconds into the game to make a substitution.

Harden immediately headed to the locker room. Moments after the first quarter ended with Milwaukee holding a 32-30 lead, the Nets announced he was out for the rest of the game.

James Harden is heading to the locker room with an apparent hamstring injury pic.twitter.com/r8hmUGHF05

Harden averaged 24.6 points, 10.9 rebounds and 8.5 assists on 47.1 percent shooting in 36 regular-season games after being acquired from the Houston Rockets in mid-January. He also missed 18 games with a right hamstring injury before returning May 12.

During Brooklyn’s five-game win over the Boston Celtics in the first round, Harden averaged 27.8 points, 10.6 rebounds and 7.2 assists on 55.6 percent shooting.

The Nets still won despite Harden’s absence as they beat the Bucks, 115-107, behind Kevin Durant’s 29 points and Kyrie Irving’s 25 points.