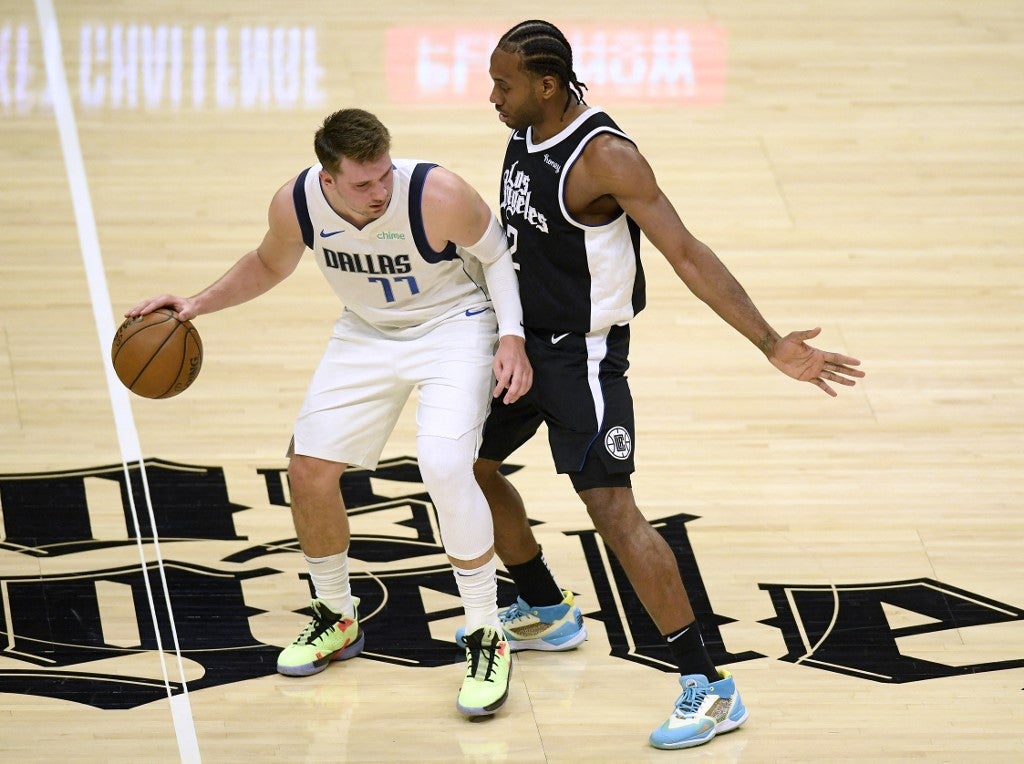 Kawhi Leonard #2 of the LA Clippers defends Luka Doncic #77 of the Dallas Mavericks in the first quarter during game one of the Western Conference first round series at Staples Center on May 22, 2021 in Los Angeles, California. Harry How/Getty Images/AFP

The NBA might have lost the defending champions to elimination in the first round of the playoffs, but it will get a chance to feature two of its brightest stars in a Game 7 on Sunday.

Kawhi Leonard and the Los Angeles Clippers will play host to Luka Doncic and the Dallas Mavericks with a spot in the second round, and a matchup against the Utah Jazz, on the line. The NBA is searching for a new champion after the Los Angeles Lakers were eliminated this week.

The No. 4 seed Clippers might have had home-court advantage in the series against the Mavericks, but creature comforts have failed to give either team an advantage.

As each team has won three games, neither has won at home, making it the first time an NBA playoff series has ever gone at least six games with the road team winning every time. Yet the Mavericks won’t pretend like they will have an advantage in Los Angeles.

“It’s Game 7,” Doncic said. “It doesn’t matter where you are, you got to leave everything on the court and that’s it.”

Leonard and Doncic have not disappointed in the series, with Doncic playing through a painful neck strain in Game 4 and still coming through with 19 points in limited capacity. He followed that with 42 points in a Game 5 victory.

It was Leonard’s turn to rise to the occasion in Game 6, scoring 45 points on 18-of-25 shooting, including 5 of 9 from 3-point range. He insisted afterward that he was not putting the Clippers on his shoulders, but his play suggested otherwise.

“You definitely don’t want to go home,” Leonard said when asked about his mentality in playoff games. “(It’s) just something that I had, you know, always wanted to win the game, try to exert my will on the floor, and my teammates had the same mentality.”

While Leonard has won an NBA title and has come out on top in a Game 7 of the playoffs, Doncic has limited big-game experience. This is only the second playoff series of his three-season career, and both have been against the Clippers after losing in the first round last season.

Doncic had 29 points and 11 assists in Game 6, going 11 of 24 from the field. Leonard has taken more of an active role in guarding Doncic as the series has progressed, with Doncic shooting just 6 of 16 in the first three quarters Friday without making a 3-pointer.

The Mavericks’ supporting cast did what they could. Tim Hardaway Jr. scored 23 points, and Boban Marjanovic had 12 with nine rebounds in just his third appearance in the series and second start. But Kristaps Porzingis was held to seven points and five rebounds in 31 minutes.

Reggie Jackson chipped in 25 points for the Clippers, while Paul George had 20 points and 13 rebounds. But Game 7 figures to lie in the hands of Leonard (32.8 points per game) for Los Angeles and Doncic (34.0) for Dallas.

“Even when we don’t shoot the ball great, we’re finding ways to win,” Clippers head coach Tyronn Lue said. “We’ve done it three times on their home floor, which their crowd was amazing. We were able to fight through that and now we go home for Game 7.”