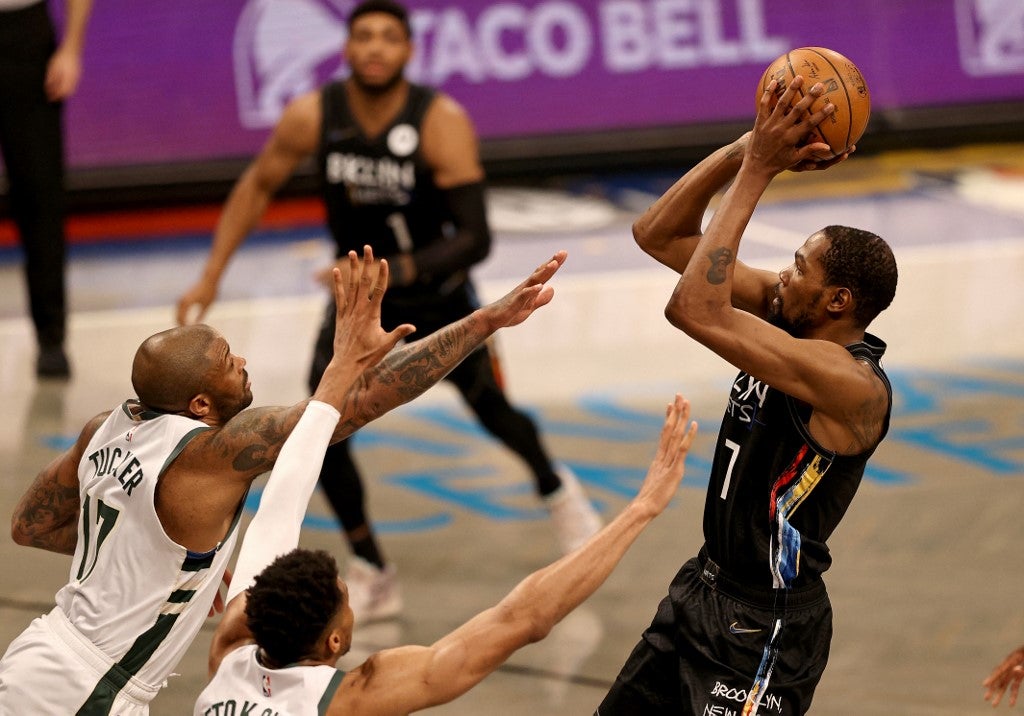 NEW YORK, NEW YORK – JUNE 07: Kevin Durant #7 of the Brooklyn Nets takes a shot as P.J. Tucker #17 and Giannis Antetokounmpo #34 of the Milwaukee Bucks defend in the third quarter during game two of the Eastern Conference second round series at Barclays Center on June 07, 2021 in the Brooklyn borough of New York City. Elsa/Getty Images/AFP

Kevin Durant scored 32 points in three quarters and the Brooklyn Nets did not miss a beat without James Harden, cruising to a 125-86 rout of the Milwaukee Bucks on Monday in Game 2 of the Eastern Conference semifinals in New York.

The second-seeded Nets lead the best-of-seven series 2-0 ahead of Game 3 on Thursday in Milwaukee.

Brooklyn, which never trailed, led by as many as 49 points in the fourth quarter. The Nets led by double digits for the final 39:11.

In 33 minutes, Durant shot 12 of 18 from the field and posted his fourth 30-point game of the postseason. He also hit four 3-pointers, grabbed four rebounds and handed out six assists.

32 PTS in 3 quarters for KD.
BKN goes up 2-0 in the series.#ThatsGame #NBAPlayoffs

Durant finished his latest productive game by going around Giannis Antetokounmpo for a reverse layup with 4.8 seconds left in the third quarter to give Brooklyn a 95-65 lead.

Kyrie Irving added 22 points on 9-of-17 shooting and had six assists for the Nets, who shot 52.1 percent and set a franchise postseason record with 21 3-pointers. It marked the fourth time in their first seven postseason games the Nets shot at least 50 percent from the floor.

Antetokounmpo led the third-seeded Bucks with 18 points and 11 rebounds. He shot 8 of 15 from the floor and missed five of seven free-throw attempts. He is shooting 53.5 percent (23 of 43) from the foul line in the postseason.

Milwaukee’s Khris Middleton added 17 points but missed his first eight shots, finished 8 of 20 from the floor and committed five turnovers. Jrue Holiday was held to 13 points.

Harden watched from the bench after being ruled out due to right hamstring tightness. He was injured 43 seconds into Brooklyn’s 115-107 win in the series opener on Saturday.

Without Harden, the Nets dominated early and cruised to their fifth double-digit win of the postseason.

Durant scored 21 as the Nets led by as many as 27 points before halftime and took a 65-41 edge into the break. He made 7 of 10 shots prior to intermission, including a 3-pointer with two seconds left in the first quarter that put the Nets up 36-19 after the opening 12 minutes.

Read Next
Golf champ at 19: Who is Yuka Saso?
EDITORS' PICK
SWS: Over 12M Filipinos still jobless as of May 2021
Smart celebrates all kinds of ‘#SimplyLove’ for Pride Month
Gilas out to prove Korea win not a fluke; Tab fires back at ‘lucky shot’ remark
Smart brings KCON:TACT especially 4U to subscribers from June 19 to 27
WATCH: INQside Look with Fil-Am actress Aina Dumlao
Brazil set to pass half a million COVID-19 deaths
MOST READ
The opposition’s dilemma
Underdog Dasmariñas vows to fight to the death vs Inoue
Chavit Singson joins Nationalist People’s Coalition
Rajko Toroman praises, warns Gilas Pilipinas
Don't miss out on the latest news and information.