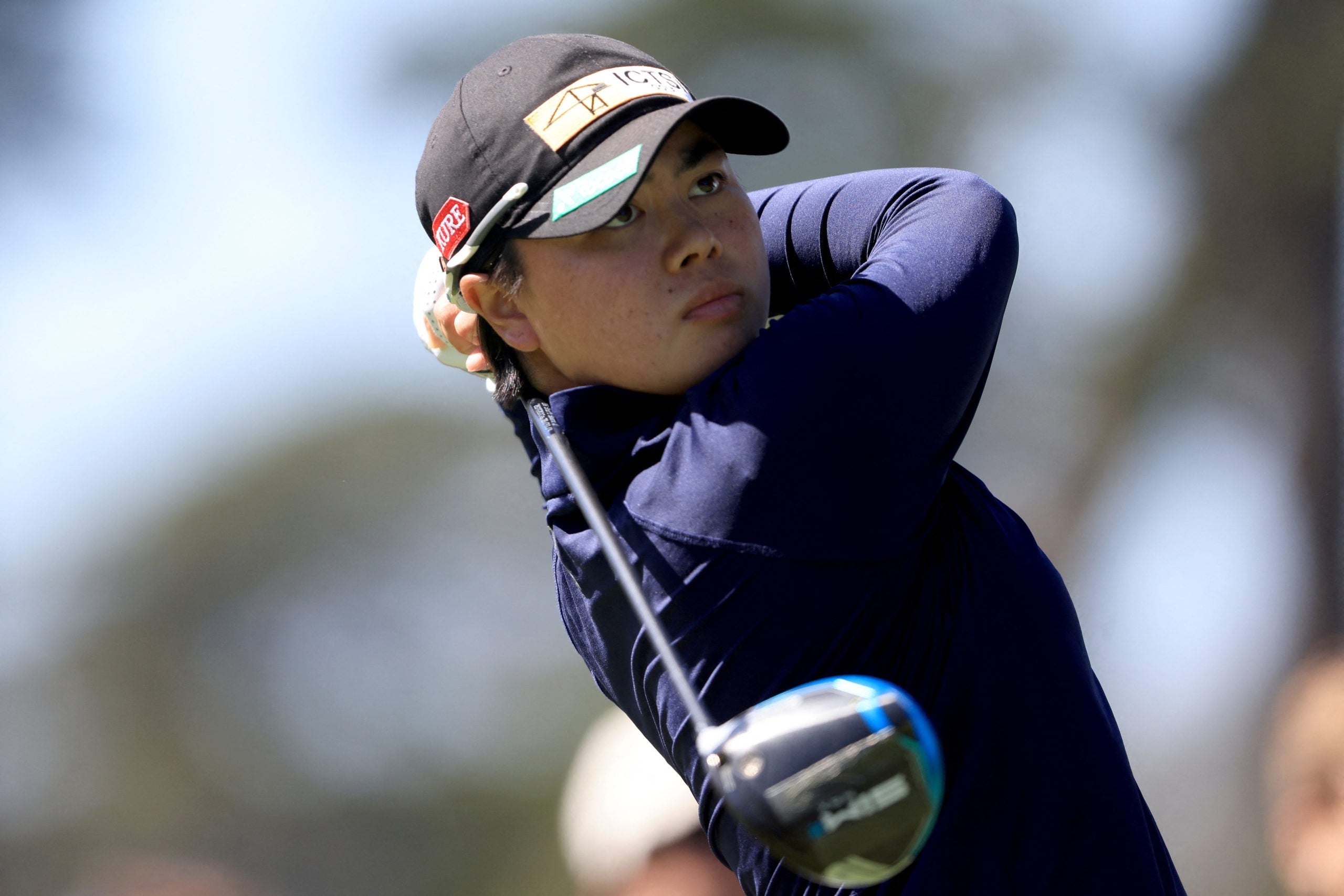 Yuka Saso of the Philippines hits her tee shot on the ninth hole playoff against Nasa Hataoka of Japan during the final round of the 76th U.S. Women’s Open Championship at The Olympic Club on June 06, 2021 in San Francisco, California. Sean M. Haffey/Getty Images/AFP

Yuka Saso got to watch her game the morning after clinching the US Women’s Open championship in San Francisco.

“I was looking at my shot at No. 2, I don’t know how I did that,” she told journalists via an online video chat late Monday night. “I had a great bunker shot at 17, very good shot at 16 as well. My putter worked for the last five or six holes. I think that made my day.”

That’s as far as she usually goes when reviewing past performances.

“Looking back, I don’t think that helps, for me,” she said, talking from San Francisco, where she made history as the first Filipino—man or woman—to win a golf major. “I gotta keep looking forward and taking [things] day by day.”

But her performance at the imposing Lake Course of Olympic Club surely made looking back on her career a must, as the 19-year-old champion displayed nerves of steel in a scintillating fight-back that ended in a tense, sudden-death playoff victory.

Because she had done this before. She was down two strokes in the final hole to Chinese amateur star Liu Wenbo in 2018 before coming through with a brilliant eagle to claim the Asian Games gold.

And if ever there was a stage perfectly built for a comeback win, it was Lake Course, which had hosted five previous men’s US Opens before—and all winners had to mount some sort of a rally to win.

According to the New York Times, Webb Simpson won in 2012 after rallying from four strokes down. Lee Janzen won after overcoming a five-shot deficit in 1998. Scott Simpson trailed by a stroke heading to the final round before claiming the 1987 trophy.

A deeper check into US Open history proved even more revealing.

Billy Casper, trailing Arnold Palmer by three after the third round, fell four more strokes down at the turn of the final round before swallowing that seven-shot deficit and winning via a playoff in 1966. And in 1955, the first time Olympic Club hosted the US Open, Jack Fleck shot a final round 67 to come back from a three-shot, 54-hole deficit and pip Ben Hogan in a playoff.

So when Saso trailed American Lexi Thompson by five, entering her final nine holes, history was certainly on the Saso’s side—even if she doesn’t put too much stock on the past.

So while she had to deal with nerves, Saso stayed on top of the pressure by staying in the moment.

“I was nervous,” she said in Filipino. “I’m not numb. I just trusted the process and that worked.”

“Nervousness will come,” Saso added. “But pressure, you can control. So I think I controlled that well.”

She mastered pressure well enough that she didn’t need to tune out the noise, especially in the playoff. Instead, she embraced the enthusiasm of flag-waving fans.

“They gave me a lot of energy and I’m thankful for that,” Saso said. The fans were mostly Filipino, but Saso, the Inquirer’s female athlete of the year for 2020, is also proud of her Japanese roots.

“I actually think [I’m representing] the Philippines and that won’t change,” said Saso, whose father is Japanese. “Whatever happens in the future, I’m still Filipino and I’m also Japanese. I’m both. But I love both countries.”

Her win thrust the Tokyo Olympics squarely in her cross-hairs. But Saso isn’t taking aim just yet.

“I don’t want to rush things; I just want to focus on right now,” she said, adding that winning a golf major doesn’t equate to Olympic success.

She’ll deal with the coming challenges the way she handled every shot at Lake Course.

“Every shot or putt I hit, I was never really confident. I just want to take it shot by shot, focusing on what I have to do.”