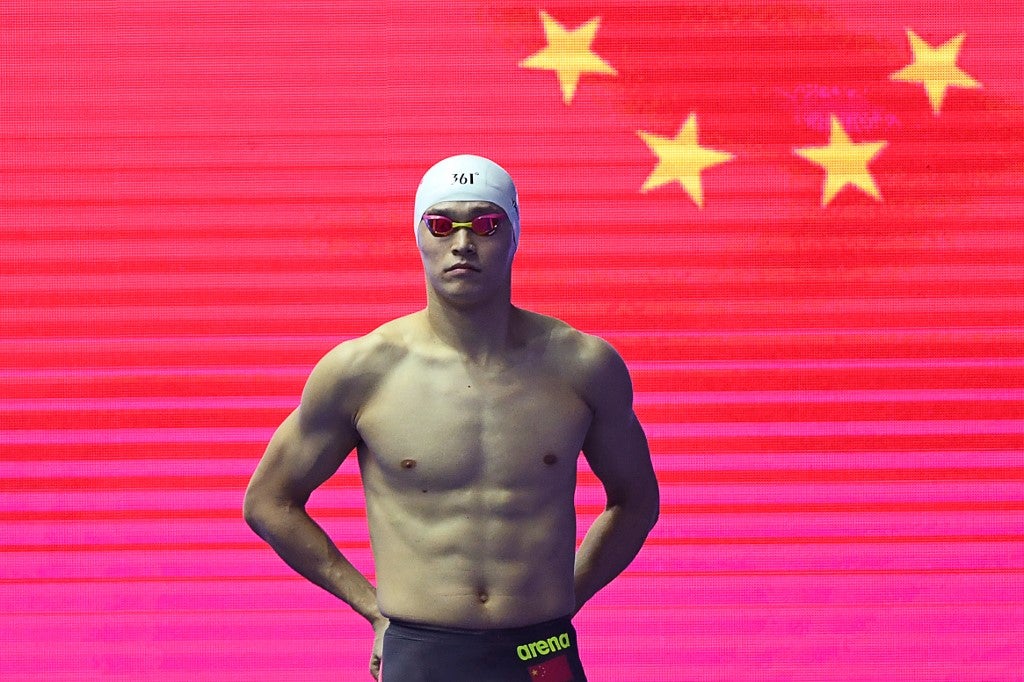 Chinese swimmer Sun Yang will miss the Tokyo Olympics after the Court of Arbitration for Sport on Tuesday handed him a ban of four years and three months for violating anti-doping rules.

CAS, which came to the decision after a high-profile three-day retrial, said the suspension was backdated to February 28, 2020.

The swimming competition at the Tokyo Games, postponed a year because of the Covid-19 pandemic, is due to start on July 24.

The 1500m freestyle world record-holder appeared to have no hope of making it to the Olympics after the Lausanne-based CAS banned him for eight years in February last year for refusing to give a sample following an incident in which a member of his entourage smashed a vial containing Sun’s blood when doping inspectors visited his home.

However, the 29-year-old Sun appealed and Switzerland’s federal supreme court overturned the career-ending punishment last December over alleged bias against the swimmer, who remains a huge star in China.

Sun, who was banned for three months in 2014 for a separate doping offense, has always protested his innocence in the murky events of September 2018.

The reigning 200m freestyle Olympic champion, as well as an 11-time world champion, says the doping testers were not qualified or authorized.

But CAS said a new panel, installed after the Swiss federal decision, “found to its comfortable satisfaction” that Sun had “acted recklessly” and committed two anti-doping rule violations when an unsuccessful attempt was made to collect blood and urine samples at his residence in September 2018.

Sun was found guilty of “evading, refusing or failing to submit to sample collection by an athlete” and “tampering or alleged tampering with any part of doping control by an athlete or other person”.

“FINA will enforce the CAS award according to its terms, and in accordance with its obligations as a signatory to the World Anti-Doping Code,” it said.

WADA said it “welcomes” the ban, director general Olivier Niggli saying: “Today’s ruling reconfirms WADA’s position in relation to the original FINA ruling, which was that there were a number of points that were inconsistent with the (anti-doping) code. Today’s CAS ruling validates those concerns.” 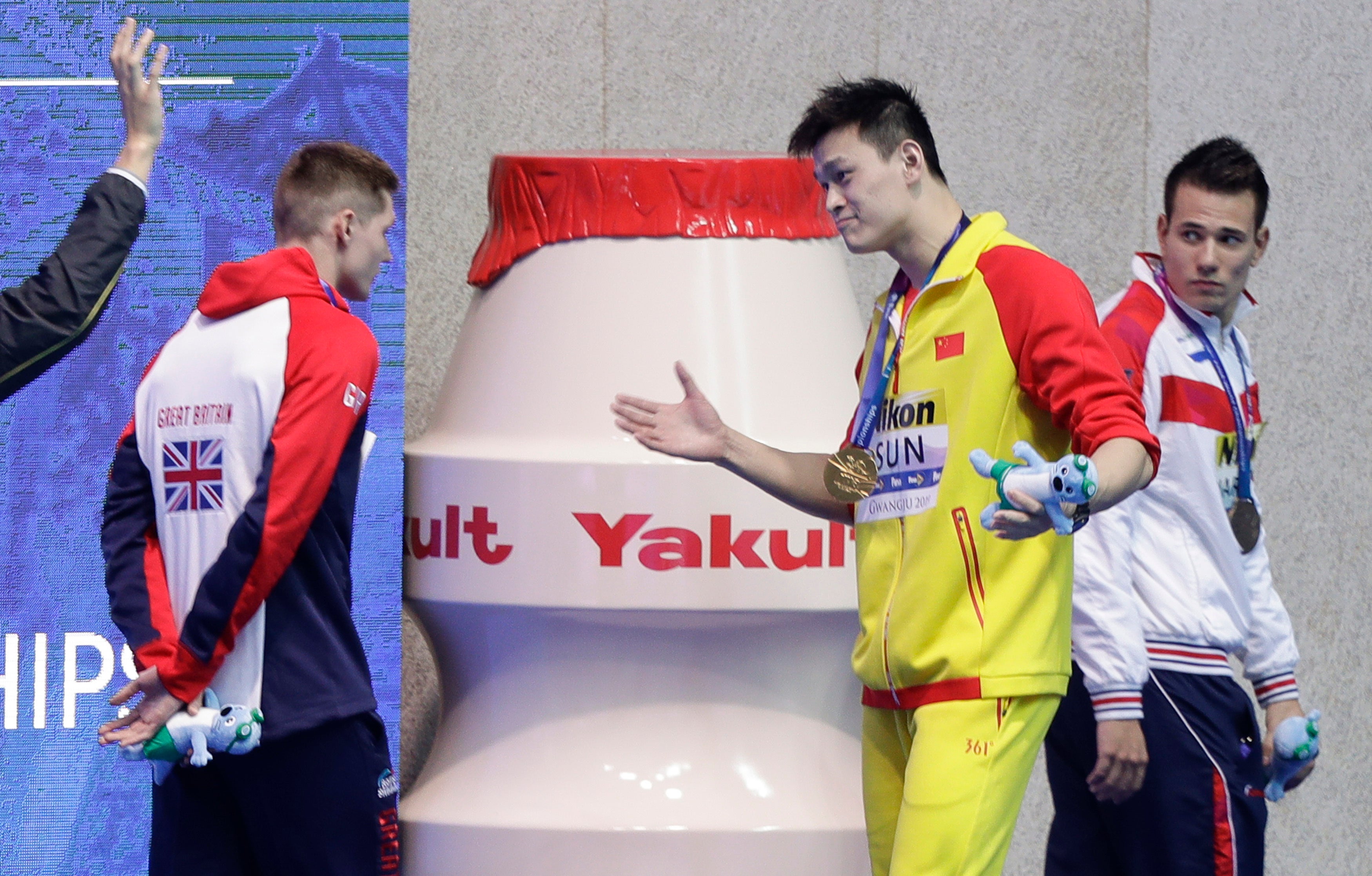 The Chinese Swimming Federation had specified that athletes who won at the 2019 world championships in Gwangju would be “automatically qualified” for the July 23-August 8 Tokyo Games.

Sun, who won world titles in the 200m and 400m freestyle, met the criteria and would therefore have qualified for Tokyo if the ban had been overturned.

But those doubts have now been erased. The swimmer’s ban expires just before the start of the 2024 Paris Olympics, when Sun will be 32.

The swimmer is feted at home not only for his prowess in the pool but also his perceived good looks.

But long-simmering antipathy towards him from some of his rivals burst into the open at the Rio 2016 Olympics when Australian Mack Horton blasted Sun as a “drug cheat” before pipping him to gold in the 400m freestyle.

The usually steely Sun broke down in tears.

He hit back to win the 200m but not before French swimmer Camille Lacourt caused another storm by declaring, in a nod to Sun’s 2014 doping ban: “Sun Yang pisses purple.”

Then, at an ill-tempered 2019 world championships, Horton refused to pose for pictures with Sun on the medal podium, a protest repeated by Britain’s Duncan Scott.

That enraged Sun, who shouted “I win, you loser” at Scott, in angry scenes rarely seen in swimming.

The only child of an athletic family, Sun announced himself to the wider public at the world championships in Shanghai in 2011. Aged 19, he shattered Grant Hackett’s long-standing 1500m freestyle world record and also won the 800m.

Sun grabbed two more golds at the London 2012 Olympics, again setting a new mark in the 1500m — a record that still stands.

But then came the first in a long list of flashpoints. In 2013, Sun fell out with long-time coach Zhu Zhigen after a row over the swimmer’s romantic ties with a flight attendant.

Months later, Sun, driving without a license, slammed a borrowed Porsche SUV into a bus in his home city of Hangzhou, near Shanghai. He spent seven days in police detention and later vowed to mend his ways.

At the 2014 Asian Games, Sun was at the center of controversy again, describing the national anthem of Japan, China’s arch-rivals, as “ugly” after losing to Kosuke Hagino in the 200m freestyle.

In November 2014 came the bombshell announcement that Sun had served a three-month suspension earlier that year for taking a banned stimulant. He has always maintained it was prescribed medicine for a heart condition.