MANILA, Philippines—Drew McIntyre knew the importance of improving himself and it ultimately paid off with a career-defining moment in two of the WWE’s biggest events of the year.

The former two-time WWE champion had a title run rarely seen in the world’s biggest wrestling promotion. After Vince McMahon’s company cut him in 2014, he became the organization’s top star in 2020–three years into his return.

McIntyre said in a virtual press conference that he wouldn’t have reached the heights he got to without the help of his significant other and fighting superstar Brock Lesnar.

“When I got fired, I had to kind of look myself in the mirror and say, ‘this is kind of on you, you know,’” said McIntyre in a press conference to promote the airing of WWE shows NXT and NXT UK in Philippine TV. “Things weren’t going great, personally, but professionally. I got signed I’d have been happy to be the waterboy, but I kind of lost sight of that and I wasn’t working hard on my presentation.”

“I can’t believe I wasn’t like working as hard as it should have been. And from that day I got fired, I changed my mindset. Left no stone unturned and I was accountable to the person in the mirror, became the busiest wrestler in the world,” he added.

McIntyre, who holds a master’s degree in criminology from Glasgow Caledonian University, first got into the WWE in 2007 but didn’t make much of an impression prompting the promotion to send him to developmental circuit Florida Championship Wrestling in 2008.

After spending time in the developmental league, the 6-foot-5 Scotsman made his return to the main roster with McMahon himself branding McIntyre as The Chosen One and someone who could be a “future world champion.”

McIntyre did get a bit of success in the mid-card winning the Intercontinental title but his character hadn’t reached McMahon’s predictions and by 2014 he was back in the independent circuit.

Kick of a lifetime 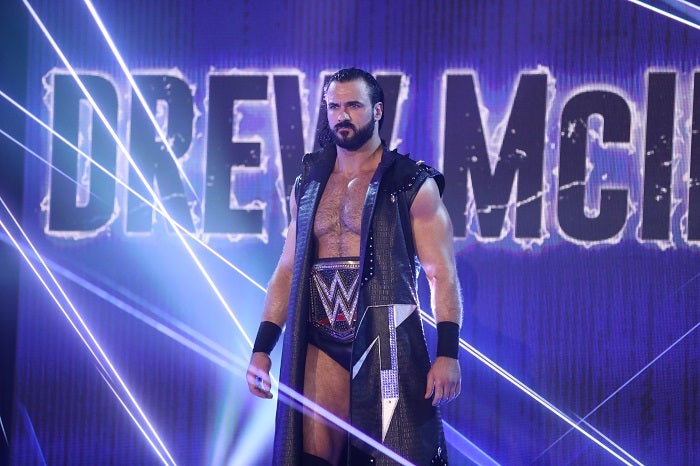 From 2014 to 2017 McIntyre bounced around several promotions honing not only his body but also his character and in the process captured the TNA, Impact, Evolve and several other world titles.

Turning into a hulk of a man during his time in the independent circuit and TNA, McIntyre eventually drew the renewed interest of the WWE and in 2017 got into NXT.

McIntyre would then win the NXT championship defeating Bobby Roode in 2017 that kickstart his way back to the main roster.

In 2018, McIntyre was back in Raw and while ge served his time near the main event picture, it took him a couple of years before he got the opportunity that would put him among the company’s greatest.

The 2020 Royal Rumble was what marked McIntyre’s entry at the top of the promotion when he eliminated then WWE champion Lesnar from the titular match with his finisher Claymore kick.

His first Wrestlemania main event was a bit of a downer as it happened during the COVID-19 pandemic, but it was a culmination of McIntyre’s dedication to the business.

“Obviously, it’s a very unique Wrestlemania with the times we were in, and bringing the world Wrestlemania at the height of a pandemic from the Performance Center. I still had the nerves, the butterflies. There might not have been 80,000 people there, but I was backstage in a very small area with about ten people in the entire building.

“I remember glancing across before my music hit, seeing Brock pacing a distance, and thinking, oh my God, that’s Brock Lesnar, and you’re about to fight him for the WWE Championship at Wrestlemania with millions of people watching. It was time to give them a show.

Just like what he did in the Royal Rumble, Lesnar did the job for McIntyre placing the erstwhile journeyman into WWE’s annals.

“There’s a few people who can really take you to the next level when you’re working with them, and Brock Lesnar is right at the top of that list. I was provided an opportunity, and thanks to him and a lot of other people, I was able to deliver. I would not be where I’m at right now without that Brock feud in front of the crowd where the crowd really rallied behind me, and defeating Brock at Wrestlemania,” said McIntyre.

“The fact that I won my first WWE title, the fact that it was against Brock with so many people watching around the world, and that this was their escape, and we were able to bring them that escape with Wrestlemania.”