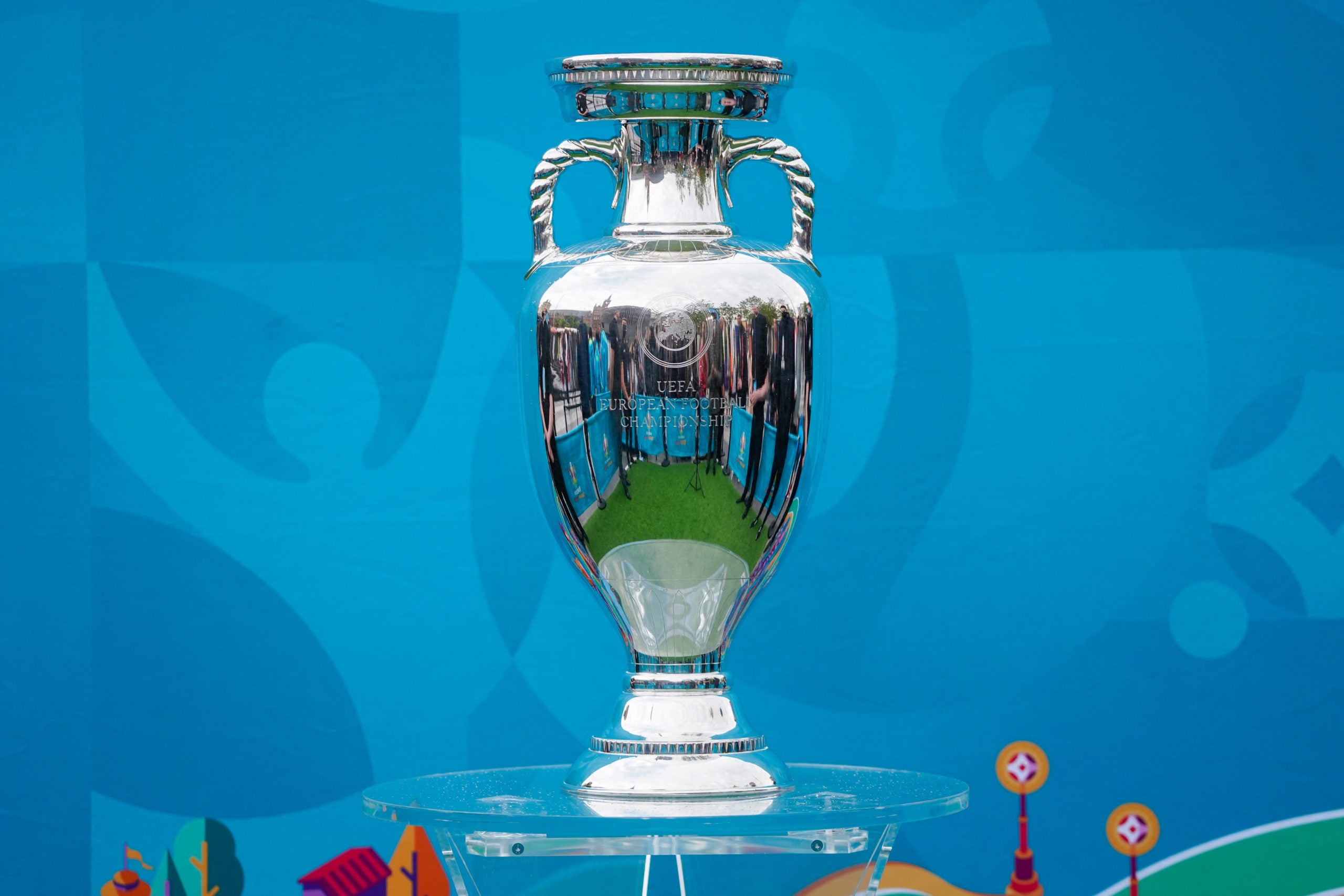 A picture shows the UEFA European Championship trophy at Kings Cross Station in London on June 4, 2021 after it arrived on the final leg of the trophy’s tour in preparation for the UEFA EURO 2020 football championship. (Photo by Niklas HALLE’N / AFP)

England and Italy are counting down to Sunday’s Euro 2020 final, with Gareth Southgate’s men seeking to end a 55-year trophy drought while the Azzurri aim to spoil the Wembley party.

Sporting immortality beckons for England captain Harry Kane and his team-mates, who are desperate to etch their names into the record books by winning just the second major trophy in the nation’s history.

Wembley, which was also the venue for England’s 1966 World Cup triumph, will host around 65,000 fans for the game despite coronavirus restrictions still in place.

England began the tournament as one of several contenders to lift the trophy and have taken advantage of playing all but one of their matches at home.

Southgate’s men will be willed on by the vast majority of a crowd that created a crackling atmosphere for England’s last 16 win over Germany and the semi-final success against Denmark.

“The players need to feel that warmth and support. It has definitely helped inspire us. We’re in a final and we are here to win,” said Southgate.

“Now we want to go and bring the trophy home for everybody.”

England’s historic run to their first European Championship final has sent the nation into a frenzy.

Kane said he and his team-mates will embrace the weight of expectation.

“To see the fans on the street like they have been and to see the reception we’ve had as we’ve pulled into the hotel here and as we left St George’s Park, it just shows us how big an occasion it is,” he said.

“We’ve been knocking down barriers along the way but we started this tournament with an aim to win it and we’ve now got the opportunity.”

Southgate has a potential headache after revealing that Manchester City midfielder Phil Foden, who has featured in three Euro 2020 matches so far, is a doubt for the final due to a foot injury. “I send my good wishes for tomorrow with the hope that history will record not only your success but also the spirit, commitment and pride with which you have conducted yourselves,” said the Queen, who handed England captain Bobby Moore the World Cup more than half a century ago.

Johnson praised England’s stars for lifting the nation’s spirits with their run to the final.

“We are not just hoping or praying. We believe in you, Gareth, and your incredible squad,” Johnson wrote in an open letter to Southgate and his squad.

“On behalf of the entire nation, good luck, have a great game – and bring it home!” Standing in England’s way are a battle-hardened Italy side who have restored the nation’s pride after failing to qualify for the 2018 World Cup.

England have never beaten Italy at a major tournament, although meetings between the nations have been few and far between.

Italy triumphed in a penalty shoot-out in the Euro 2012 quarter-finals and won 2-1 when they met in the group stage of the 2014 World Cup, though both sides ended up being eliminated in the first round.

The teams have been transformed since that low point.

Italy lit up Euro 2020 from the moment they beat Turkey 3-0 in the tournament’s opening game a month ago.

The Azzurri are on a national record 33-match unbeaten run under coach Roberto Mancini, who has spent time in England both as a player and as a manager.

This will be their third game of the tournament at Wembley, where they beat Austria 2-1 in extra time in the last 16 and Spain on penalties in a gripping semi-final on Tuesday.

“These are games that might not come around again in a player’s career so we are very fortunate,” said Italy captain Giorgio Chiellini.

“You just need to dampen some of the enthusiasm when you go into a final. That goes for us and for England.”

Italy had the backing of around 11,000 British-based fans at the semi-final and their supporters will once again be there for the final.

Reports in Italy said that 6,500 tickets had been sold to fans based in Britain and that number would be bolstered by 1,000 more who will fly into the country for the game, including President Sergio Mattarella. An Italy supporter gestures ahead of the UEFA EURO 2020 round of 16 football match between Italy and Austria at Wembley Stadium in London on June 26, 2021. (Photo by Frank Augstein / POOL / AFP)

Italy are looking to end a long wait to win the European Championship.

The four-time World Cup winners have been continental champions only once, when it was just a four-team event in 1968.

Since then they have reached two finals, losing to France in 2000 and to Spain in 2012. Sunday’s game will be their 10th major tournament final.