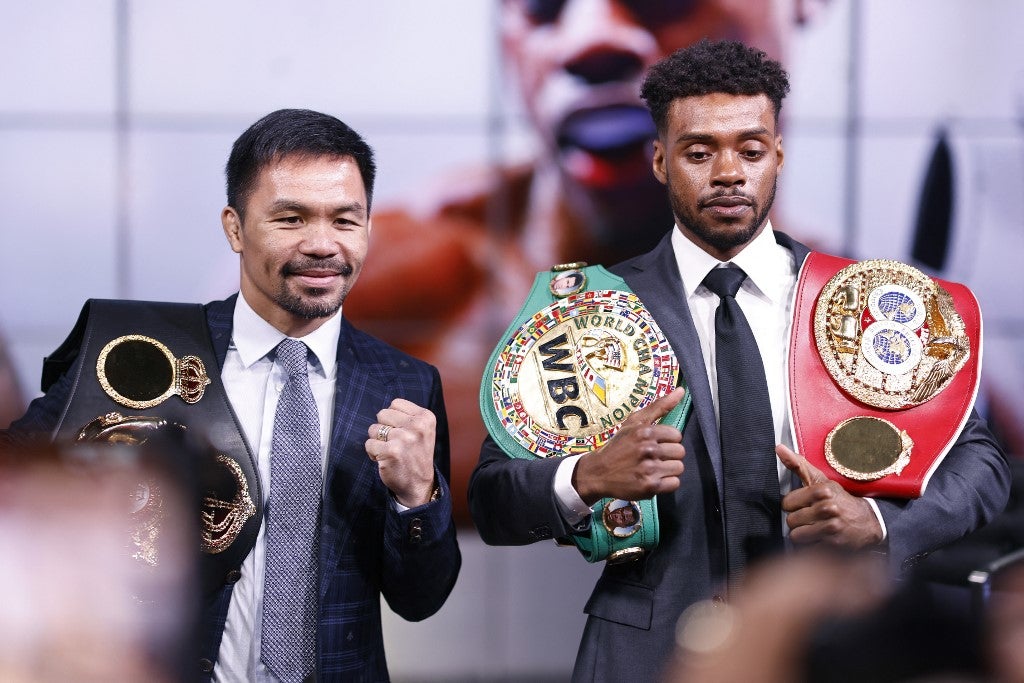 Manny Pacquiao and Errol Spence Jr pose for the media following their press conference at Fox Studios on July 11, 2021 in Los Angeles, California. Their fight is scheduled on Aug. 21, 2021 at T-Mobile Arena in Las Vegas, Nevada. Michael Owens/Getty Images/AFP

Spence boasts a flawless resumé with 21 of his 27 wins coming by knockout, but even with all that to show, Roach doesn’t see the undefeated American as a greater threat than Pacquiao’s old foe Keith Thurman.

“I think it’s the right fight for him now,” Roach told BoxingScene. “I think his last opponent (Thurman) is actually better than Spence. I’ve been studying [Spence’s] tapes and so forth and going through what he does well and what he doesn’t do well. And I think it’s a good fight for Manny.“

“Just watching tapes on them and studying both fighters, I think Thurman throws more combinations and I think he’s a little bit stronger. Spence has a few flaws. He makes some mistakes that we’re gonna take advantage of. Watching tapes on both guys, I see more mistakes by Spence than I did with Thurman.”

Pacquiao beat a much-younger Thurman on points back in July 2019 to win the WBA (Super) welterweight title.

The eight-division champion hasn’t fought since but is set to return against the two-belt champion Spence on Aug. 21 in Las Vegas.

“I like the fight a lot. And I like that it’s a competitive fight. I like that Manny doesn’t just wanna fight stiffs or actors or whatever it may be. He’s still fighting real people,” Roach said.

“This fight is a real fight. And this is not an easy fight for either person. We had a real nice press conference. They both were very respectful of each other, and they both are gonna come to win. That’s for sure. That’s what we intend to do.”