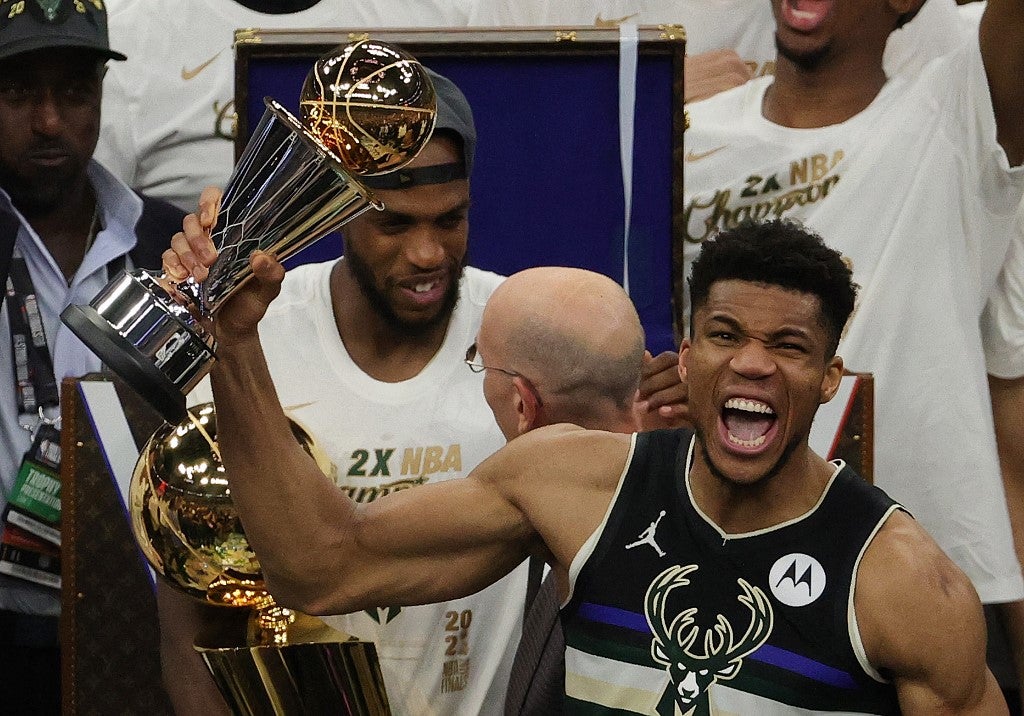 As the last seconds ticked away before Milwaukee won the NBA Finals, Giannis Antetokounmpo thought not about his amazing performance but instead pondered his incredible journey from poverty to champion.

“When I came to the league, I didn’t know where my next meal will come from. My mom was selling stuff in the street,” Antetokounmpo recalled.

“Now I’m here sitting at the top of the top. I’m extremely blessed. I hope this can give everybody around the world, from Africa, from Europe, hope it can be done. I want them to believe in their dreams.”

The 26-year-old Greek forward of Nigerian heritage scored 50 points, matching the greatest total in a close-out game in NBA history, to spark the Milwaukee Bucks over Phoenix 105-98 on Tuesday for their first crown in half a century.

He also managed 14 rebounds, five blocked shots, dominating defensive moves and even a 17-for-19 free throw showing in an iconic all-around masterpiece effort for the ages.

“It has been a long journey. I’ve done it all. I did anything that I could just to be in this position,” Antetokounmpo said.

With 65,000 people cheering in the streets outside the arena and 20,000 more screaming inside, Antetokounmpo won NBA Finals Most Valuable Player honors.

“I started playing basketball just to help my family. Tried to get them out of the struggle, the challenges we were facing when we were kids.”

"Giannis, when you first started playing basketball.. did you ever think a moment like this would happen?"

"No, man. No, no, no, no."#NBAFinals presented by YouTube TV pic.twitter.com/LuUpdTBTrg

Antetokounmpo wants to inspire youth who grew up in tough times as he did.

“This should make every person, every kid, anybody around the world believe in their dreams — no matter whatever you feel when you’re down, when you don’t think it’s going to happen for you or you might not make it in your career — just believe in what you’re doing and keep working,” he said.

“Don’t let nobody tell you what you can be and what you cannot do. People told me I cannot make free throws. I made my free throws tonight and I’m a freaking champion.”

He’s the only player in NBA history with five NBA All-Star and All-NBA selections, a finals and two season MVP awards and the top defender awards before turning 27.

Antetokounmpo credited former coach Jason Kidd with developing parts of his game other than scoring and current Bucks coach Mike Budenholzer with teaching him to trust his teammates in order to built a championship squad.

He’s already thinking about a title repeat in 2022.

“This is an addictive feeling. These are the moments I want to chase. I want the team to build off this and hopefully we can do it again,” said Antetokounmpo.

“This is going to be a quick turnaround. We’re going to be back and a lot of people are going to come after us and we have to be ready for that.”

“He made me believe,” Antetokounmpo said. “Kobe Bryant thinks I can do this and I can play at a high level and build my team and win my MVP? I had to do it. I had to work hard.

“To be able to accomplish those things, it’s crazy. It’s unreal. It’s freaking unreal. I can’t believe it.”