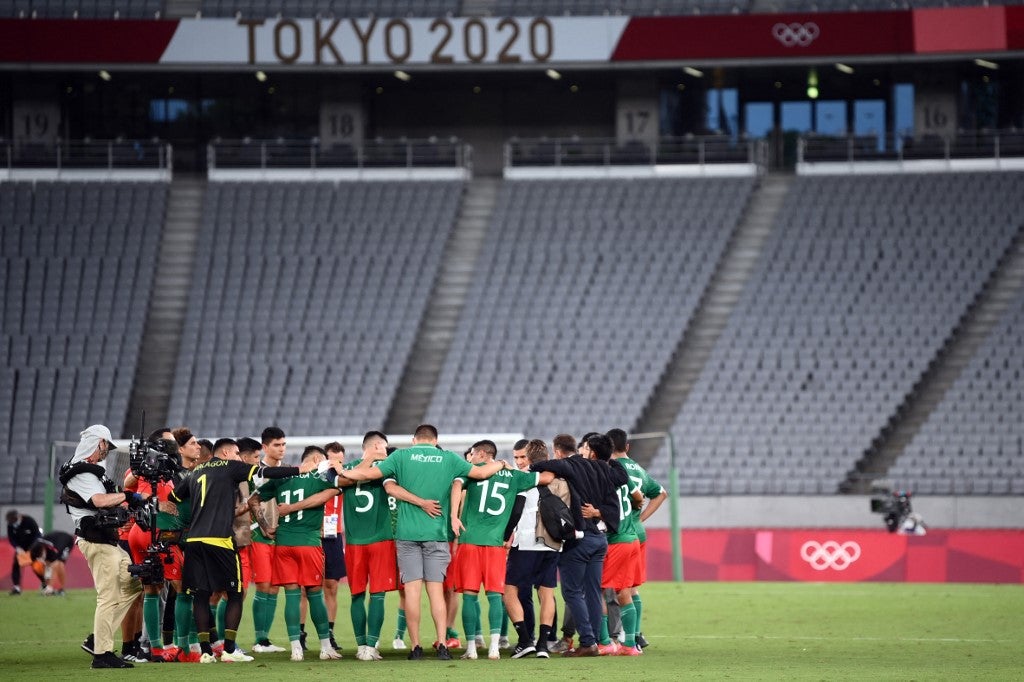 Mexico team celebrate its victory at the end of the Tokyo 2020 Olympic Games men’s group A first round football match between Mexico and France at Tokyo Stadium in Tokyo on July 22, 2021. (Photo by FRANCK FIFE / AFP)

France’s bid for men’s Olympic football glory got off to a nightmare start with a 4-1 defeat by Mexico on Thursday, while Richarlison scored a hat-trick as reigning champions Brazil beat Germany in a six-goal thriller.

Sylvain Ripoll’s France is looking for a first Olympic medal since winning gold in 1984, but collapsed in the second half at Tokyo Stadium.

“We’re obviously disappointed with the result but also with the balance of our play,” said former Lorient boss Ripoll.

“To compete, we would’ve needed a big performance, but that wasn’t the case.”

Mexico took the lead less than two minutes after the break through Alexis Vega, before Sebastian Cordova doubled their advantage in the 55th minute.

The 35-year-old captain Andre-Pierre Gignac, whose last game for the French senior team was the Euro 2016 final loss to Portugal, pulled one back from the penalty spot with 21 minutes remaining.

But any thoughts of a comeback were quashed as Uriel Antuna and Eduardo Aguirre netted late on for 2012 champions Mexico.

France now faces a tough task to get out of Group A with a top-two finish, ahead of games against Covid-hit South Africa on Sunday and host Japan on July 28.

“The first thing we now have to do is digest this disappointment,” added Ripoll. “We only have two days. There’s no time to waste.”

Japan saw off South Africa, who had two players test positive for Covid-19 on Sunday, 1-0 thanks to Takefusa Kubo’s second-half strike.

Brazil, who won gold for the first time when inspired by Neymar on home soil five years ago in Rio, downed Germany 4-2 in a dramatic match which saw forward Richarlison net a first-half hat-trick.

The Everton man scored three times inside the first half an hour, but Matheus Cunha missed a penalty and Germany then threatened an unlikely second-half comeback.

Bayer Leverkusen’s Nadiem Amiri pulled one back before the hour mark, and although Maximilian Arnold was sent off shortly afterwards, substitute Ragnar Ache cut the deficit to one goal with seven minutes of the 90 left.

But it was another Leverkusen player, Paulinho, who came off the bench and put the match to bed for Brazil in the fourth minute of stoppage time. 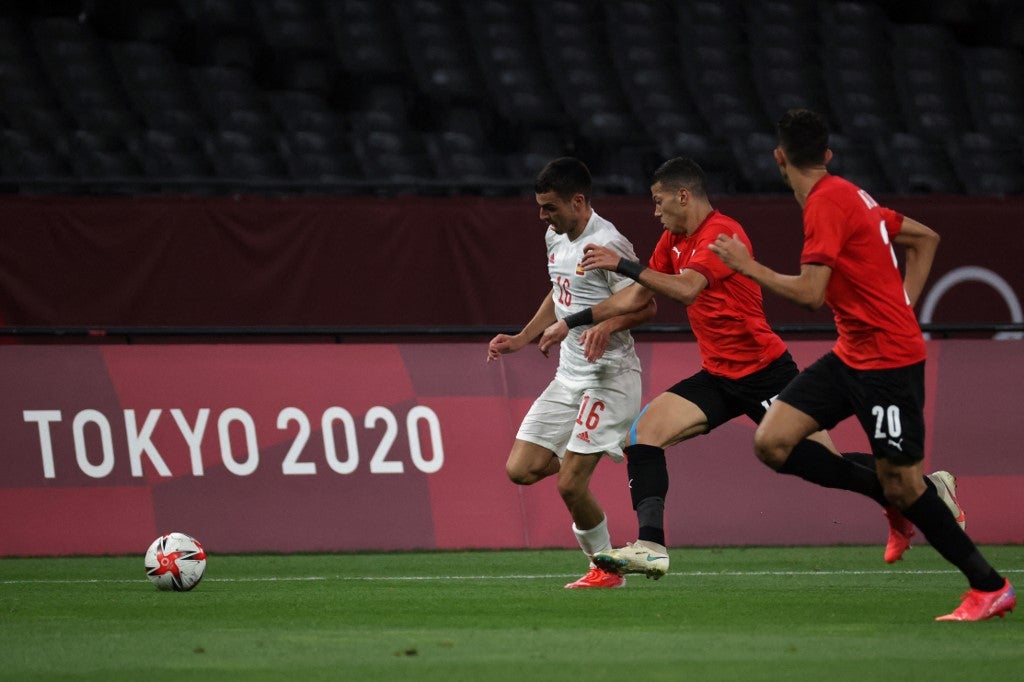 Spain’s midfielder Pedri Gonzalez (L) runs with the ball past Egyptian players during the Tokyo 2020 Olympic Games men’s group C first round football match between Egypt and Spain at Sapporo Dome in Sapporo on July 22, 2021. (Photo by ASANO IKKO / AFP)

Spain struggled in Sapporo, as a team featuring six players who reached the Euro 2020 semi-finals dominated possession but created few chances in a 0-0 draw with Egypt.

The closest they came to a goal was when Real Madrid midfielder Dani Ceballos, who recently spent two seasons on loan at Arsenal, crashed a first-half shot against the post.

Spain, winners on home soil in 1992, next take on Australia in three days’ time before their final Group C match with Argentina.

Australia took early control in the table, as goals from Lachlan Wales and Marco Tilio saw them beat 10-man Argentina 2-0.

New Zealand made a successful start in Group B as Burnley striker Chris Wood, one of the three over-age players in the squad, secured a 1-0 victory over South Korea in Kashima with his 72nd-minute winner.

It was their first-ever win in Olympic football, having managed just one draw in each of the 2008 and 2012 tournaments.

An own goal saw Romania edge out Honduras 1-0 in the group’s other game.