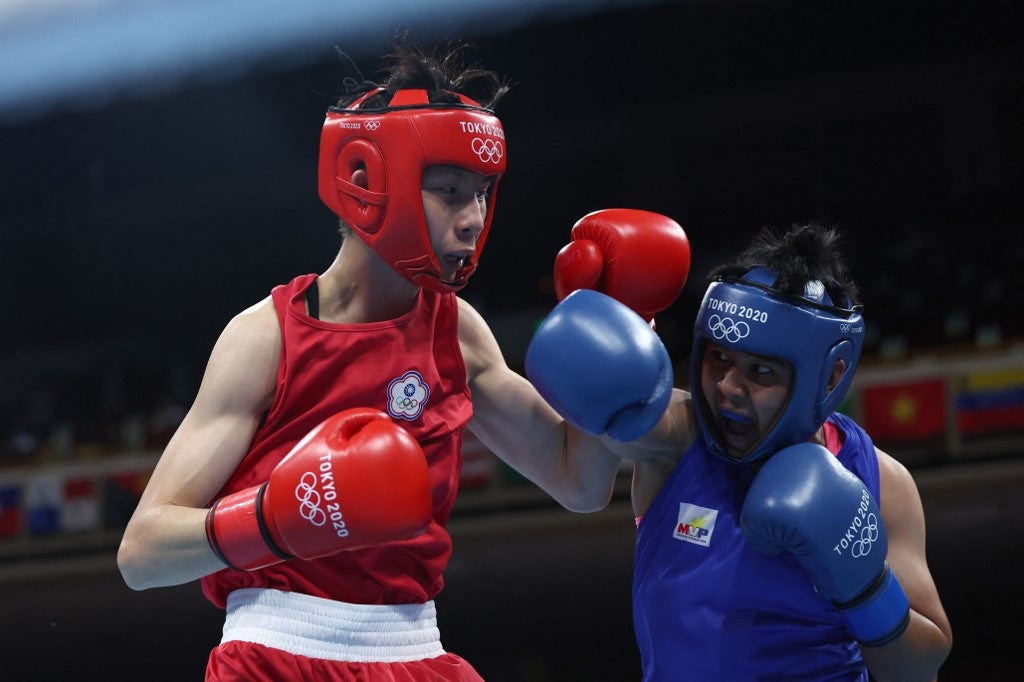 Chinese Taipei’s Yu-Ting Lin (red) and Philippines’ Nesthy Petecio fight during their women’s feather (54-57kg) preliminaries round of 16 boxing match during the Tokyo 2020 Olympic Games at the Kokugikan Arena in Tokyo on July 26, 2021. (Photo by Buda Mendes / POOL / AFP)

TOKYO–Nesthy Petecio moved a win away from securing a medal in the Tokyo Olympics here.

Petecio advanced to the women’s featherweight quarterfinals after taking down top-ranked Lin Yu-Ting of Chinese Taipei Monday at Kokugikan Arena.

“She stuck to the tactics, without overcommitting,” said coach Don Abnett. “[She was] getting into her punching range, getting her opponent to lead off and then can her with one or two punches or combinations.”

In a close fight that had a sparse Filipino audience, mostly sports officials, holding their breath, Petecio dominated the first round, got cured into a deadlock after two and then masterfully chalked up crucial points in the third without surrendering anything to seize the victory.

“Coach Boy [Velasco] was telling me that we were ahead and I just had to take care of the leads,” Petecio said.

A win by Petecio in the quarterfinals will assure her of at least a bronze medal.

Lin, the world No. 1 and overwhelming favorite in the bout, could not sustain the rally she mounted in the second round and was left completely flummoxed by Paetecio’s frequent stance-switching in the game.

“She made much more effort than me and I did not take my chances so I can only blame myself,” said the 5-foot-7 Lin, who was much taller and lengthier than Petecio, who needed to aim high when going after the Taiwanese’s head.