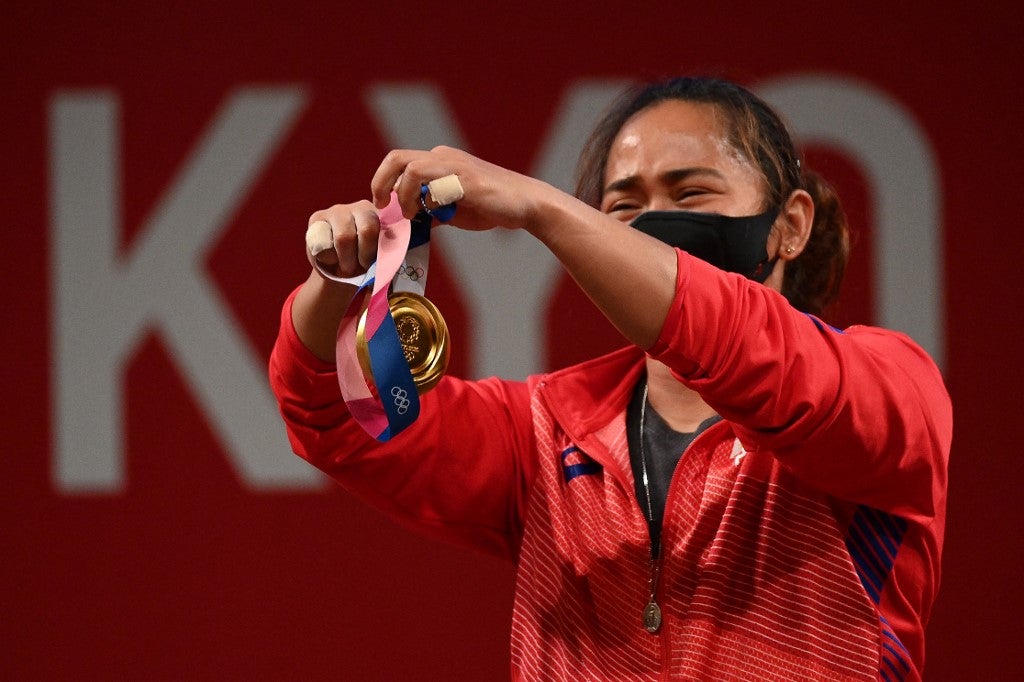 Gold medalist Philippines’ Hidilyn Diaz holds her medal on the podium for the victory ceremony of the women’s 55kg weightlifting competition during the Tokyo 2020 Olympic Games at the Tokyo International Forum in Tokyo on July 26, 2021. (Photo by Vincenzo PINTO / AFP)

MANILA, Philippines — Hidilyn Diaz is expected to pocket a cash windfall of more than P35 million for her historic gold medal performance in the women’s 55kg weightlifting competition at the Tokyo Olympics.

As per Republic Act No. 10699 or the National Athletes and Coaches Benefits and Incentives Act, Olympic gold medalists will be rewarded with a P10 million prize.

The country’s tycoons in Manny V. Pangilinan and Ramon S. Ang have also pledged P10 million each while Deputy Speaker of the House Mikee Romero has committed P3 million.

As it stands, Diaz is set to receive P35.5 million. Her bounty is expected to increase after the Office of the President had previously mentioned adding cash bonuses on top of what is already mandated by law.

In her fourth consecutive appearance in the Games and what could likely be her Olympic swan song, Diaz cemented her legacy by becoming the first Filipino to win an Olympic gold medal since the Philippines joined the quadrennial meet in 1924.

The 30-year-old Diaz, who was introduced to weightlifting when she was 11 years old, took down world record holder Liao Qiuyun of China in a dramatic finish.

Diaz won after setting an Olympic standard of 127kg in the clean & jerk for a total lift of 224kg, which is also a Games record.