STARTING YOUNG As a young girl in Zamboanga City, Hidilyn Diaz carried jerry cans filled with water for their household needs until, at 9 years old, she was introduced by an older male cousin to weightlifting. She never looked back. (PHOTO CONTRIBUTED BY THE DIAZ FAMILY)

As a young girl in Mampang village in Zamboanga City, Hidilyn Diaz bore the weight of filled jerry cans so her family had water to use in the household.

Eduardo Diaz, Hidilyn’s 60-year-old father, told the Inquirer on Tuesday that looking back, it would be unthinkable how his daughter could achieve such a feat in the Tokyo Olympics given the family’s poor economic means.

Eduardo credits Hidilyn being “stubborn and determined” for reaching this far in her sports career.

“I know she was having a hard time, but every time we would tell her to take a break, she kept going on. Her hands were scarred with blisters and blood, but she kept going on,” Eduardo noted.

“We were so poor, but our economic conditions didn’t dampen her dream. At a young age, she already aimed high. She was consistent; despite hardships, she persevered,” added her 56-year-old mother Emelita.

Everybody loves a winner 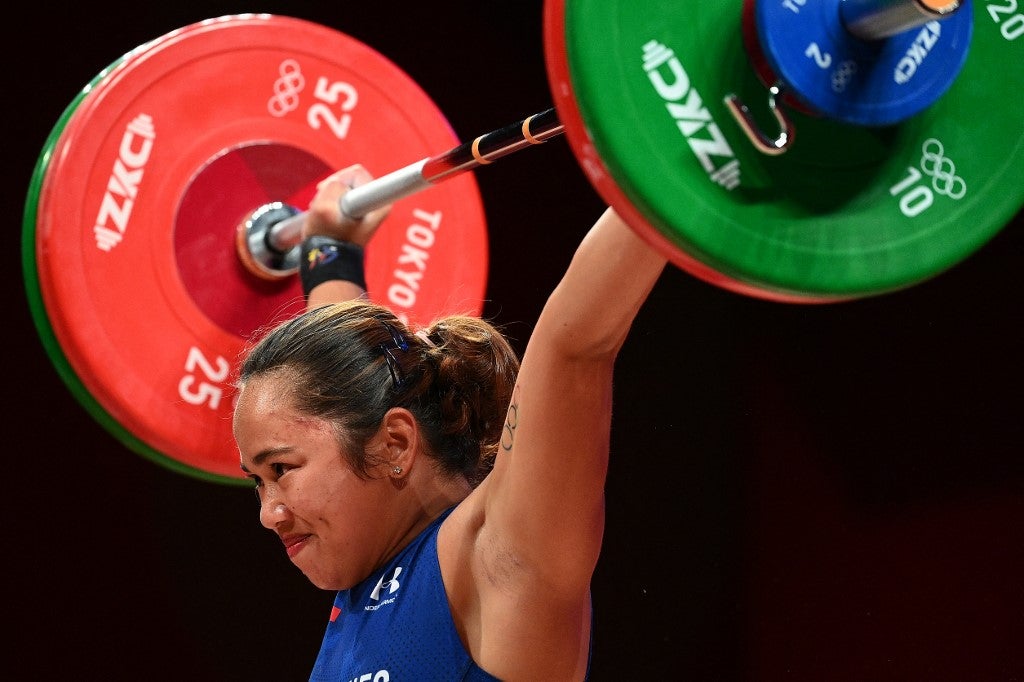 Their daughter now basks in the love of her countrymen.

Diaz, the weightlifter who snatched the country’s first-ever Olympic gold medal, is coming home to an unprecedented windfall from the business community.

For starters, she is getting P10 million in cash each from San Miguel Corp. boss Ramon S. Ang and businessman Manuel V. Pangilinan, a P14-million condominium unit in Eastwood City from tycoon Andrew Tan’s Megaworld Corp., another house-and-lot package from Century Properties Group, and free plane tickets for life from AirAsia Philippines. Megaworld said it would also shoulder all taxes for its gift.

These are on top of the P10-million cash incentive that the government is obliged to give to any Filipino athlete who would win an Olympic gold medal under the amended National Athletes and Coaches Benefits and Incentives Act.

House Deputy Speaker and 1-PACMAN Rep. Michael Romero is also giving P3 million in cash to Diaz for her “golden feat of historic proportions” that should inspire other Filipino athletes in the ongoing Tokyo Olympics.

“Nawa’y magsilbing inspiration sa lahat ng Pilipino ang tapang at galing mo (May your courage and excellence serve as inspiration for all Filipinos). Hard work, dedication, malasakit (care): that’s what it takes to overcome challenges and win in sports and in life,” San Miguel’s Ang said in a Facebook post on Tuesday.

“Wow as in wow. Great job, Hidilyn. We knew it was a tough journey for you, but every step is now well worth it. You have our continuing prayers and support albeit at the end, it is you who does the heavy lifting. Tonight, you carried the nation on your shoulders. A huge thanks,” Pangilinan said.

“This epic moment is about 97 years in the making, and this is our way of saying thanks to Hidilyn for making us all proud. We believe that it’s just right to give our first ever Olympic gold medalist a home in our first ever township, Eastwood City,” said Kevin Tan, chief strategy officer at Megaworld. (See related story on Page B1.)

Elated lawmakers heaped accolades on Diaz, referring to her as a “national treasure” and the “new Captain Barbell,” an apparent reference to the popular Filipino comics superhero.

House representatives are also discussing plans of a hero’s welcome for the 30-year-old Diaz.

As of Tuesday night, eight House resolutions have been filed to congratulate Diaz and confer various honors on her.

House Majority Leader Martin Romualdez called Diaz a “national treasure” whose name would be immortalized as the first Filipino to win a gold medal in the Olympics.

The Senate also on Tuesday passed resolutions that sought to set up a marker honoring the Olympic victory of Diaz and to establish a commemorative stamp in her honor.

A joint Senate resolution passed on unanimous accord on Tuesday honoring Diaz for bringing “great pride” to the Filipino nation, and for being an “inspiration to youngsters that with hard work and grit, no dream is unreachable.” FILE — This is where Hidilyn Diaz practiced every time she comes home in Mampang barangay, Zamboanga City. Most of the weightlifting materials are donated by coaches, friends and schools Universidad de Zamboanga. PHOTO BY JULIE ALIPALA/INQUIRER MINDANAO

Hidilyn is fifth in a brood of six who depended on the meager earnings of Eduardo from driving a rented tricycle and of Emelita from hawking fresh fish in the neighborhood.

When they were old enough to carry the containers, the two daughters would join their mother peddle fish and vegetables. And, as the youngest female in the brood, Hidilyn had the extra task of fetching water.

Her parents noticed that when she was around 9, Hidilyn developed an interest in weightlifting, the sport of her then 20-year-old cousin Catalino Diaz.

Due to her persistence, Catalino, who now lives in Davao City, began training Hidilyn when she was 10. The rest, as they say, is history.

RELATED STORIES
‘Can’t give up after winning’: Paris Olympics possible for Hidilyn Diaz