In game of weightlifting chess backstage, Team Hidilyn made all the right moves | Inquirer Sports TOKYO—There was an interesting battle, invisible to those watching the weightlifting competitions of the Olympics on Monday, waged backstage at Tokyo International Forum.

The only traces of the skirmish were at the huge video screen that served as a backdrop for weightlifters, where names flipped grid spots up and down and numbers shifted incessantly like dot matrix figures on a stock exchange ticker.

“It’s like a chess match,” Julius Naranjo, the strength and conditioning coach of Philippine heroine Hidilyn Diaz, said after the din had died down on the celebration of the country’s first Olympic gold medal.

Naranjo was talking about the strategizing that goes into submitting weights to tournament officials before a lifter walks unto the stage.

“As a team, we talk about it a lot, the weights we submit. When you’ve done everything you can to prepare physically, 70 percent of the battle is fought backstage,” Naranjo said.

The Olympic motto says, “Faster. Higher. Stronger.” And no discipline embodies the “stronger” part of the credo than weightlifting, which rewards brawn more than anything else. But on Monday, with a historic opportunity mingling with blaring music and foggy arena lights in the air, Naranjo said Team HD had to be something else.

“It’s really a lot of mind games,” said Dr. Karen Trinidad, the sports psychologist who is the primary self-belief guru in Diaz’s squad. 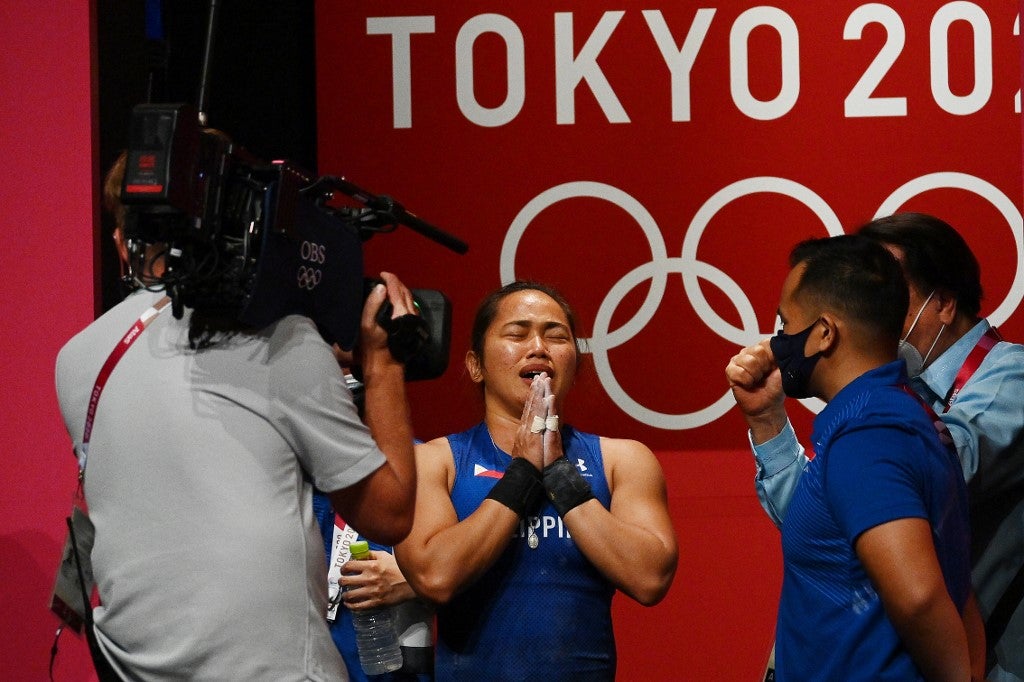 According to Naranjo, the game plan drawn up by coach Gao Kaiwen the night Diaz changed Philippine sports forever was to constantly engage Chinese world record holder Liao Qiuyun in a game of one-upmanship.

“Coach Gao’s plan was to keep submitting a weight that was one kilo more than what [Liao’s team] would submit,” Naranjo said.

But perhaps even more crucial was the fact that Diaz’s team made no indication in the past that it was capable of sustaining that scheme. Team HD, as Diaz calls her group, flew to Tokyo creating little expectations, save for those attached to the residue esteem from the 2016 Olympics silver medal feat.

“Appear weak when you are strong,” the Chinese philosopher Sun Tzu once wrote. It looked like Team HD subscribed to that mantra.

For instance, right at the start of the event:

“We knew from the start that Hidilyn would lift 94 [kgs] in snatch,” Trinidad recounted. “But what the team put was 91.”

Indeed, 91 was the number initially reflected in the large screen behind the competition platform.

“It was already in the strategy [to submit 91 as the target weight] because whatever you wrote down, the opponents would keep watch,” added Trinidad.

And watch the opponents did.

Diaz, according to Trinidad, noticed that some of the members of Liao’s squad kept monitoring her behind the stage, in the warmup area. Some of them even had walkie-talkies.

“So if you put 94 already, [they would say] the opponent is really strong. So the coaches needed a low profile and wrote down 91,” Trinidad said.

On the large monitor, Liao’s initial target attempt was 95 kilograms. Moments after Team HD went down to 91, the Chinese readjusted her target to 92. That was one kilogram heavier than Diaz’s number, but the Filipino had one crucial advantage. She was lifting last. (From L to R) Silver medallist China’s Liao Qiuyun , gold medallist Philippines’ Hidilyn Diaz and bronze medallist Kazakhstan’s Zulfiya Chinshanlo stand on the podium for the victory ceremony of the women’s 55kg weightlifting competition during the Tokyo 2020 Olympic Games at the Tokyo International Forum in Tokyo on July 26, 2021. (Photo by Vincenzo PINTO / AFP)

At this point, it is important to note that Liao had been effortlessly clearing her targets in previous tournaments. The weightlifting competition allows three tries each for snatch and clean and jerk and Liao had always swept those tries with good lifts. To hope that Liao would flub one of her attempts would be like hoping to tear down a building wall with a toy slingshot.

What Diaz needed was to take that first attempt in snatch and make it worthless and give the Chinese just five tries to grab the gold medal.

After Liao, the world record holder of their division, cleared 92, Team HD found the opening it needed.

Once again, the figures on the video screen shifted. Across Diaz’s name was the number 94.

“So there was already an advantage to us,” Trinidad said. “So in terms of writing what to carry, that is already a strategy.”

“They didn’t know,” Naranjo said, that Diaz would chop down the reigning world champion, kilogram by kilogram. From then on, every target weight that Liao dropped, Diaz did one better.

Lifter after lifter took their turns on stage, their target weights falling by the wayside as Diaz and Liao turned everything into a nervy staring contest. No one else was close enough to touch their showdown.

Both ladies went 97 kilograms in snatch. On her first lift for the clean and jerk, the Chinese star went for 118. The Filipino responded with a 119. Liao overtook Diaz with a 123, registering the highest successful progression from a previous lift in the contest at five kilos.Until Diaz matched the progression with a 124.

And that set up the breath-pausing final lift of the two players. Liao submitted a 126 target, a fresh Olympic record for a division that was making its debut in the Games. For those watching the screen switch names and numbers, the submitted weight felt like a passive-aggressive dare.

As it turned out, just like it did right from the very start, Team HD had Liao where they wanted her to be. The Filipino submitted a 127.

“I had tried that weight in training before but I never made it. Every time I try [lifting 127 kgs] I fail and I get frustrated,” Diaz said.

Naranjo, however, was confident: “We knew she could do it.”

Liao polished off her 126 without, it seemed, any trouble.

Meanwhile, for Team HD, there were no more moves left for the chess game backstage, except one the queen herself had to make.

“I just thought of my techniques, making sure I would pull it off in one motion,” she said. “I was mentally, emotionally and physically prepared.”

As she caught the bar in a racked position across her shoulders, she dipped a little lower than usual. She then exploded into the jerk position, driving the barbell overhead and steadied herself.

And for a country that had waited nearly a century for its first Olympic gold medal ever, There was a seemingly interminable standstill before she finally moved into her final position.

Hidilyn Diaz, 30, then dropped the barbell, and exploded into a medley of emotions.

She had done it. Diaz totaled 224 kilograms to edge Liao’s 223. She and her team had lured a seemingly untouchable foe within reachable range and emerged alone on top with a performance anchored on a lot of strength and just the right amount of guile.

‘Can’t give up after winning’: Paris Olympics possible for Hidilyn Diaz