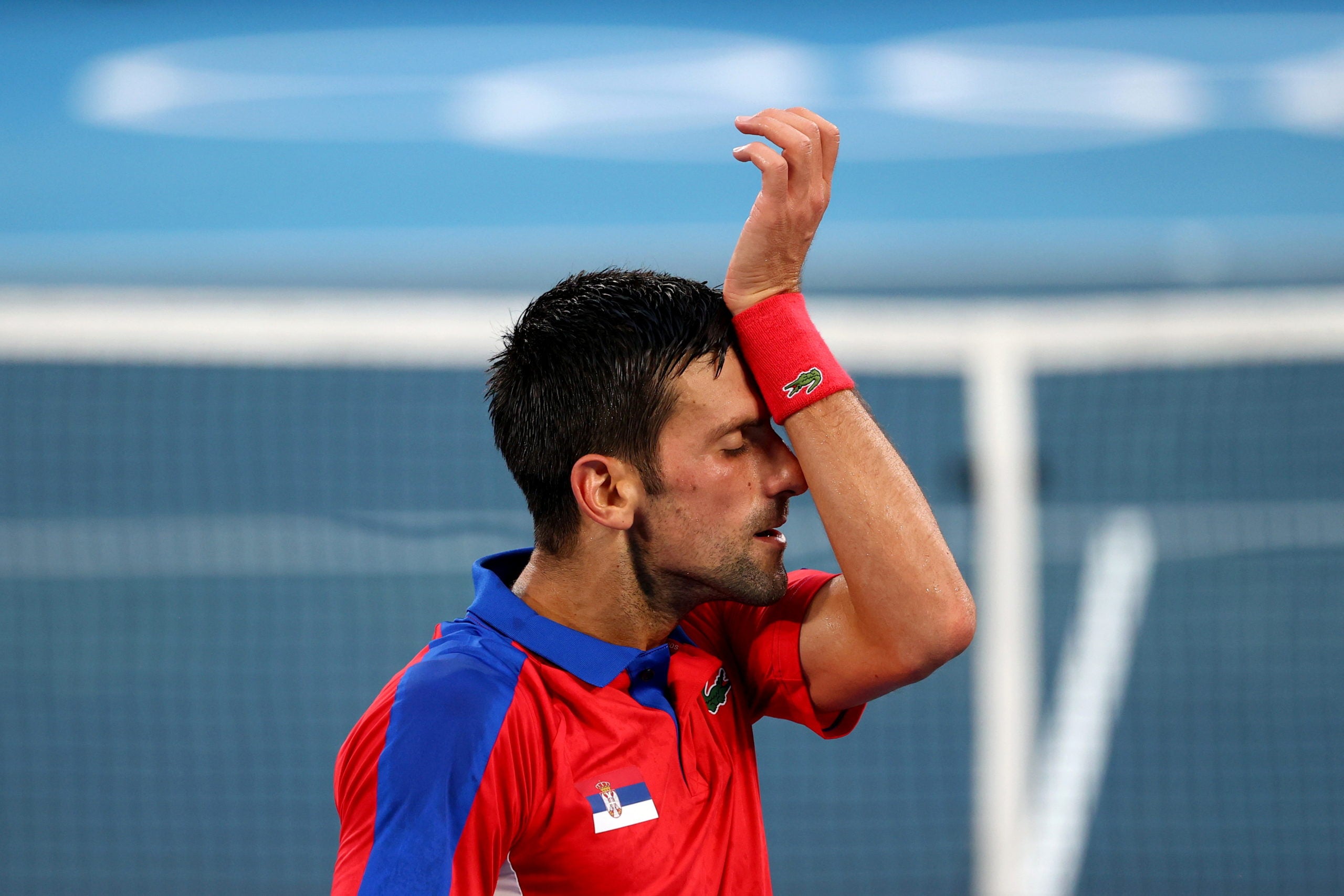 Novak Djokovic of Serbia reacts during his semifinal match against Alexander Zverev of Germany in the Tokyo Olympics. REUTERS/Mike Segar

TOKYO—Novak Djokovic was inconsolable following his surprise loss to Germany’s Alexander Zverev at the Tokyo Olympics on Friday, saying he was finding it hard to stay positive after his bid to become the first man to complete the Golden Slam came to an end.

The Serbian was unexpectedly beaten 1-6 6-3 6-1 by fifth-ranked Zverev, quashing his hopes of winning an Olympic singles gold medal, the only major honor missing from his long list of accolades.

The world number one had arrived in Tokyo gunning for the Golden Slam — winning all four majors and Olympic gold in the same year — after triumphing at the Australian Open, Roland Garros and Wimbledon in 2021.

It was a tough day at the office for Djokovic, who later lost in the mixed doubles semi-final with partner Nina Stojanovic, with the pair falling 7-6(4) 7-5 to Elena Vesnina and Aslan Karatsev of the Russian Olympic Committee.

Djokovic, who won singles bronze at the 2008 Beijing Games, admitted he was finding it hard to find consolation in possibly repeating the feat or completing a calendar-year Grand Slam by winning the U.S. Open in September.

“I don’t know I feel terrible… in every sense, but tomorrow hopefully, a fresh start. I can recover and at least win one medal for my country.” Novak Djokovic of Serbia walks off after losing his semifinal match against Alexander Zverev of Germany in Tokyo Olympics. REUTERS/Mike Segar

In his singles match, Djokovic appeared to be on course for an easy victory when he claimed the opening set for the loss of just one game and then went up a break midway through the second.

But world number five Zverev found another gear, breaking back and reeling off eight games in a row to take the set and secure a commanding lead in the decider.

Zverev sealed the victory with a backhand winner to become the first German man to make an Olympic tennis final since Tommy Haas won silver at the Sydney Games in 2000.

“It’s just sport, you know, he played better. I got to give him credit for turning the match around,” Djokovic said of Zverev.

“He served extremely well, I was not getting too many looks on the second serve. My serve just drastically dropped, I didn’t get any free points from 3-2 up in the second.”

“Yeah, my game fell apart, his game – he won, I think seven or eight games in a row and yeah, that was it.”