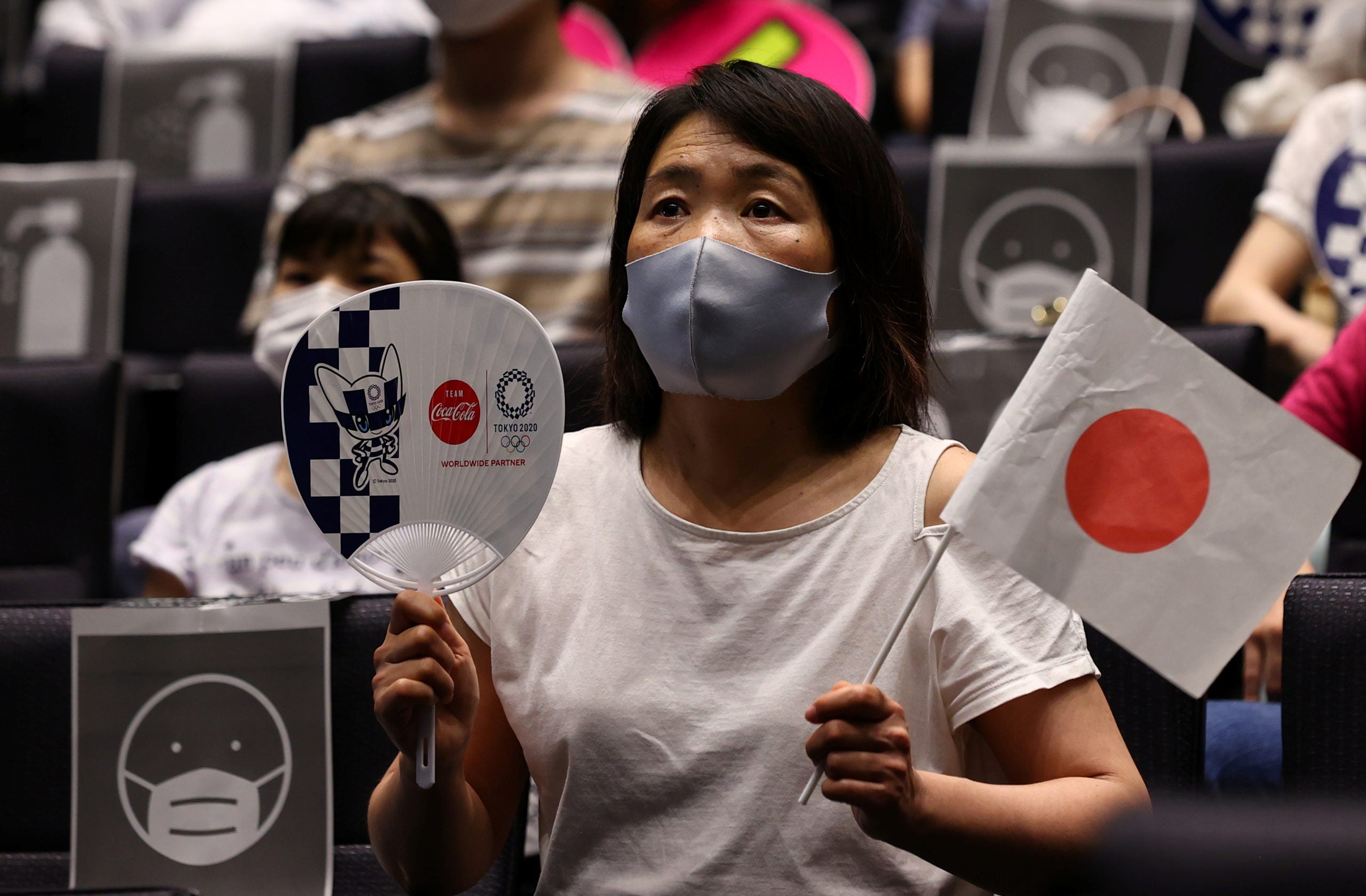 A woman reacts as she watches live broadcasting of volleyball match between Japan and Poland on a large screen during a public viewing event for Tokyo 2020 Olympic Games at a theatre in Takasaki, Gunma Prefecture, Japan, July 30, 2021. REUTERS/Kim Kyung-Hoon

TOKYO— Olympic stadiums may be empty of fans, but in the Japanese city of Takasaki, residents on Friday gathered to watch sports on a big TV screen at a theatre, highlighting the buzz created by Japan’s medal rush but also the risks of spreading COVID-19.

The 54 people in attendance were asked not to eat or drink, to maintain social distance, and keep their masks on. Cheering was banned, so most clapped to support the Japanese volleyball team which ended up losing 3-0 against Poland.

“Cheering at home is nice, but I think it’s best to gather like this and cheer while maintaining social distancing,” 57-year-old public notary Hitoshi Abe said.

Host nation Japan is enjoying a stellar Games, sitting second in the medal table with 17 golds, behind only China and ahead of sports giant the United States. People watch live broadcasting of volleyball match between Japan and Poland on a large screen during a public viewing event for Tokyo 2020 Olympic Games at a theatre in Takasaki, Gunma Prefecture, Japan, July 30, 2021. REUTERS/Kim Kyung-Hoon

The viewing was possible because COVID-19 curbs have been lighter in Takasaki – about 120 kilometers (75 miles) northwest of Tokyo – than in the Japanese capital where the spread of the Delta variant is putting hospitals under pressure.

Tokyo had 3,300 new cases, after a record 3,865 on Thursday. The surge is straining hospitals, with 64% of Tokyo’s hospital beds for serious cases filled. Japan on Friday expanded states of emergency to three areas near Tokyo and to Osaka.

Takasaki’s Gunma prefecture logged 106 new infections on Friday, one of the highest daily tallies in the prefecture. It was the sixth and last time the city, which has hosted the Polish national team, held a live public viewing event.

The Olympics will be held until August 8.