Stars who failed to shine at Tokyo Olympics

Tokyo wasn’t a great Olympics for some of the big names who failed to live up to their billing. Here are a few of the stars who didn’t shine on sport’s biggest stage: Japan’s Kohei Uchimura reacts after falling down during the horizontal bars event of the artistic gymnastics men’s qualification during the Tokyo 2020 Olympic Games at the Ariake Gymnastics Centre in Tokyo on July 24, 2021. (Photo by Loic VENANCE / AFP)

Japanese gymnast Uchimura came into the Games hoping to add a fairytale final chapter to his Olympic career.

Instead, his Tokyo campaign became a horror story when the hometown favorite slipped off the horizontal bar on day one, failing to qualify for the final.

The 32-year-old had chosen not to defend the back-to-back all-around titles he won in 2012 and 2016 due to persistent shoulder problems, preferring to focusing on a single apparatus.

“In the last three Olympic Games I’ve been able to match the level of performance I’d reached in training –- but not this time,” he said after the gamble backfired.

But a dejected Uchimura hinted he may delay retirement until after the world championships in Japan in October, giving him a chance to go out on a high. Third-placed USA’s Noah Lyles celebrates after competing in the men’s 200m final during the Tokyo 2020 Olympic Games at the Olympic Stadium in Tokyo on August 4, 2021. (Photo by Andrej ISAKOVIC / AFP)

The US sprinter arrived in Japan heavily favored to add an Olympic gold medal to his 2019 world championship 200m crown and lead a new generation of US speedsters tipped to dominate in the post-Usain Bolt era.

But the 24-year-old from Florida struggled to rediscover his best form during the 200m, narrowly avoiding a shock elimination in the semifinals before being comprehensively defeated by Canada’s Andre de Grasse in the final. USA’s Trayvon Bromell reacts after competing in the men’s 100m semi-finals during the Tokyo 2020 Olympic Games at the Olympic Stadium in Tokyo on August 1, 2021. (Photo by Javier SORIANO / AFP)

Lyles’ teammate Bromell was the overwhelming favorite in the 100m heading into the Games after clocked the fastest time in the world this year with a blistering 9.77sec at a meeting in Florida in July.

But the 26-year-old looked off the pace from the outset in Tokyo, finishing fourth in his opening heat with a sluggish 10.05sec before being eliminated in the semifinals after only managing 10.00. 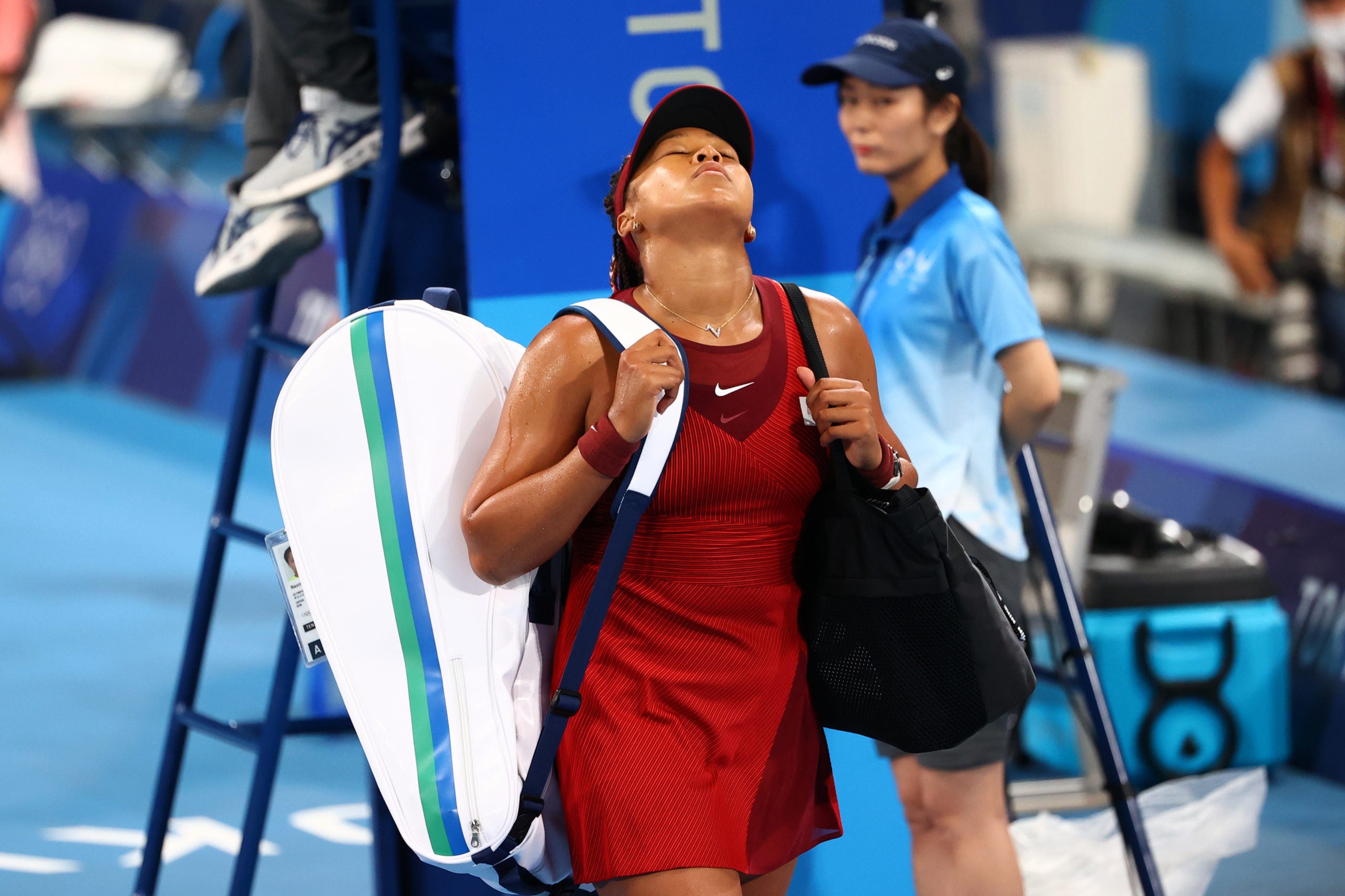 Osaka lit the Olympic cauldron to mark the opening of the Games but bid for glory failed to ignite on her return to tennis after a break for mental health reasons.

She crashed out in the third round after losing in straight sets to eventual silver medalist Marketa Vondrousova, saying the pressure of trying to win Japan’s first tennis gold on her Olympic debut was “a bit much”. Japan’s Kento Momota reacts after a point with South Korea’s Heo Kwang-hee in their men’s singles badminton group stage match during the Tokyo 2020 Olympic Games at the Musashino Forest Sports Plaza in Tokyo on July 28, 2021. (Photo by Pedro PARDO / AFP)

Hometown expectations weighed heavily on badminton star Momota, a two-time world champion who entered the Tokyo Games as top seed after winning a record 11 titles in 2019.

The 26-year-old crashed out in the first round to an unseeded opponent, admitting he felt overwhelmed in the Olympic spotlight. With the Australian Open, Roland Garros and Wimbledon titles already in the bag, Djokovic came up short in his quest to become the first man to win a Golden Slam — all four majors and Olympic gold in the same year.

Djokovic powered into the semifinals and led Alexander Zverev by a set and a break before collapsing. He then self-destructed in a racquet-smashing bronze-medal defeat to Pablo Carreno Busta, before pulling out of the mixed doubles match for third place. Driven by bitter memories of a 2016 quarterfinal exit, the United States again arrived in Tokyo as gold medal favorites seeking to become the first women’s team to achieve the World Cup and Olympic double.

But a 3-0 loss to Sweden in their opening game snapped a 44-match unbeaten run and it never really clicked for a side still built around aging stars Megan Rapinoe, Carli Lloyd and Alex Morgan.

A first loss to Canada in 20 years in the semifinals meant the Americans had to settle for bronze.