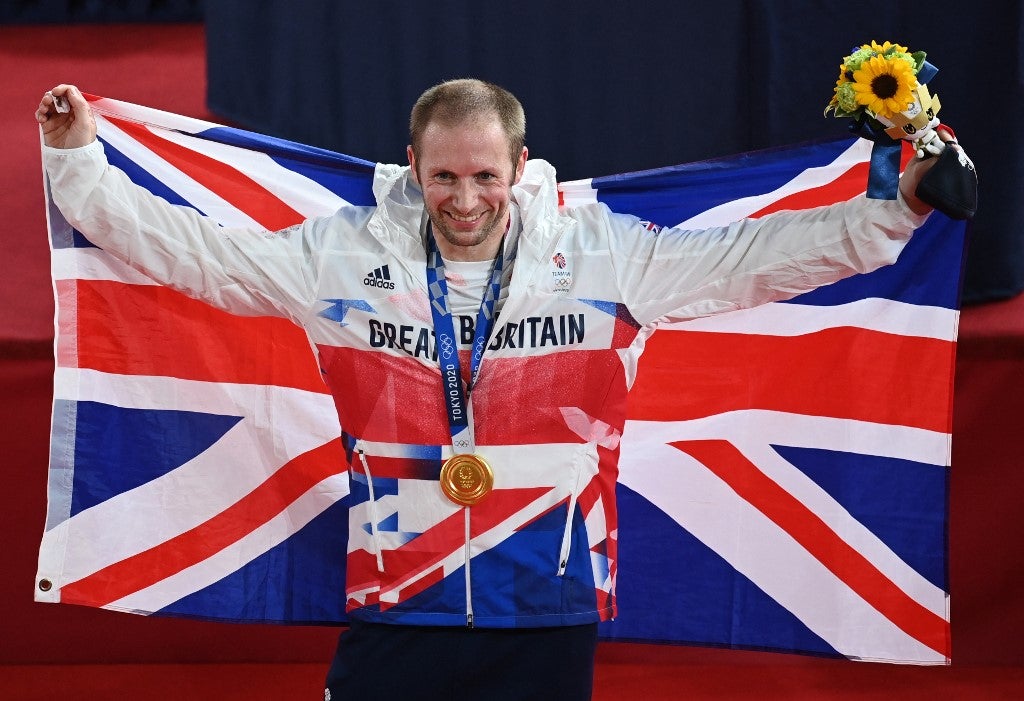 Gold medallist Britain’s Jason Kenny poses with his medal and a flag after the men’s track cycling keirin final during the Tokyo 2020 Olympic Games at Izu Velodrome in Izu, Japan, on August 8, 2021. (Photo by Greg Baker / AFP)

Jason Kenny said he might think twice about retiring from the cycling track after winning his seventh Olympic gold on Sunday to become Britain’s most successful Olympian of all time.

The 33-year-old produced a dazzling performance in the men’s keirin final to win his ninth medal overall and overtake Chris Hoy, who won six golds.

Elsewhere on the final day of action at the Izu Velodrome, Canada’s Kelsey Mitchell won the women’s sprint and America’s Jennifer Valente took gold in the women’s omnium.

But Kenny stole the show and has now also surpassed retired cyclist Bradley Wiggins as the most-decorated British Olympian ever, with seven golds and two silvers across four Games.

The defending champion finished ahead of Malaysia’s Azizulhasni Awang and Dutch world champion Harrie Lavreysen — who won gold medals in the sprint and team sprint at the Tokyo Games — after pulling off a stunning ambush in the final.

The keirin involves riders lurking behind a pace-maker until the last three laps and Kenny caught his opponents napping by immediately launching into an incredible sprint.

The veteran rider, who briefly retired after Rio 2016, is yet to confirm if he will continue beyond Tokyo but admits his latest triumph has given him pause for thought.

Asked if this was his final race, Kenny said: “If you’d asked me this morning I would have said ‘yeh, probably’, but now I feel pretty good so I might carry on.”

Kenny had looked like a fading force for most of the week in the Izu Velodrome, where he took a silver medal in the team sprint before being outclassed in the individual sprint by Lavreysen.

“This morning in my head I was 33 and getting slower,” he said. “From a British cycling point of view you’d rather back someone who is 20 and getting faster. It was difficult.

“I haven’t been able to train the way I want to, I’ve had niggles. It might not be up to me (whether he stays in the team). I was disappointed with my pace here so it might be out of my hands.”

On his victory lap, Kenny tossed away his helmet before throwing his arms into the air. On the podium, Awang and Lavreysen hoisted Kenny onto their shoulders.

Kenny’s wife, Laura, was unable to add to her own medal haul, finishing sixth in the women’s omnium, an event in which she won gold in 2012 and 2016.

Laura Kenny won gold in the madison and silver in the team pursuit at the Tokyo Games, taking the Kenny couple’s total Olympic medal haul to 15, including 12 golds.