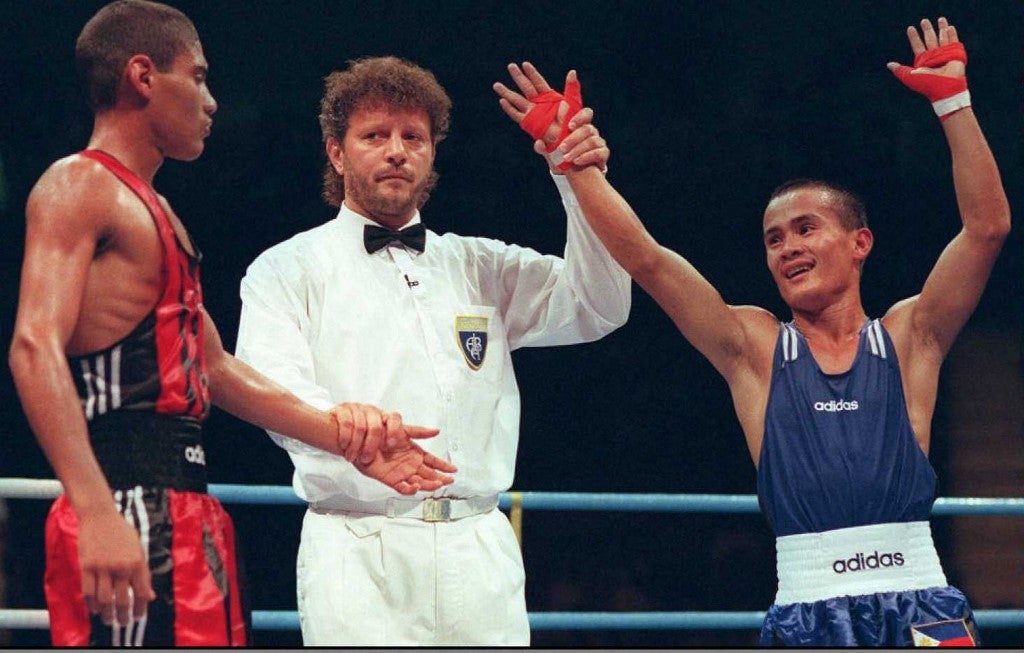 FILE – Referee Imre Nagy of Hungary signals that Mansueto Velasco (R) of the Philippines has defeated Yosuani Aguilera of Cuba in their men’s 48kg bout at the 1996 Atlanta Games. AFP-IOPP/Omar TORRES

MANILA, Philippines — Former boxer Mansueto “Onyok” Velasco stands to receive P500,000 from the government as financial aid for the false commitments promised to him when he claimed a silver medal in the 1996 Atlanta Olympics.

Senator Bong Go, the chairman of the Senate Committee on Sports, said the additional cash incentive is already being processed by the Office of the President to compensate for the unfulfilled obligations of various entities in the past.

In a recent interview with the 47-year-old Velasco, the former Olympian revealed he has yet to receive the P2.5-million pledge from certain members of the House of Representatives then, as well as scholarship grants for his children from another pledger.

An unnamed businessman had likewise committed to provide a lifetime monthly allowance of P10,000, but was discontinued after a year, according to Velasco.

“Based on the records, the government was able to give Onyok the cash incentives given to medal-winning athletes at that time. But there were those who made pledges who failed to keep their commitment,” said Go.

During Velasco’s silver-medal feat in Atlanta, lawmakers have yet to craft a clear-cut policy on the cash incentives that medal-performing athletes in the Olympics could receive.

Republic Act 10699 or better known as the national athletes and coaches benefits and incentives act expanded the coverage of bonuses granted to the recipients starting 2015 with an Olympic gold worth P10 million, a silver P5 million and a bronze P2.5 million.