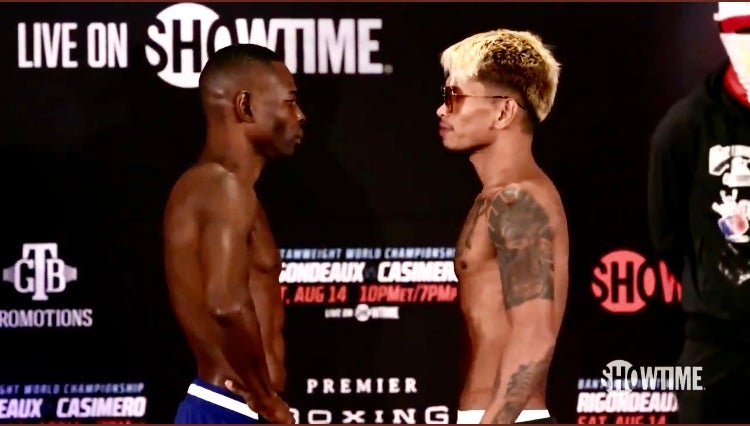 Guillermo Rigondeaux and John Riel Casimero during the weigh in ahead of their WBO title bout. SHOWTIME VIDEO

LOS ANGELES — On Saturday night, John Riel Casimero gets the chance to shed his colorful, zany image and become the A-list world champion he so desired. All he has to do is beat Cuban challenger Guillermo Rigondeux.

Both passed the official weigh-in on Friday (Manila time) at Hyatt-LAX with Casimero tipping at the exact 118 lbs requirement, and Rigondeux 117.5 lbs. That cleared the way for the fight at the open-air Dignity Health Sports Park in Carson, some 20 miles from here.

“Don’t worry Rigo, this will be your last fight,” said Casimero of the 40-year-old, two-time Olympic champ who is known to frustrate attack-minded sluggers like himself.

With his WBO bantamweight title and dreams of landing the big-money fights on the line, John Riel Casimero will need to find ways how to power his way into the vaunted defense of crafty Rigondeux.

Casimero is hoping to cash in on this fight so he can have a crack at Naoya Inoue, the Japanese lineal champion and top draw.

He’s not only looking for an easy win. Instead he needs a kind of performance that would transform him from just another exciting boxer to a true-blue main attraction.

“John Riel will launch a deadly punch,” said Neri in Filipino. “We will not target the head, it’s too small. So we need to connect to the body.”

Fighting under the banner of Manny Pacquiao’s MP Promotions, Casimero had knocked out all of his last six fights putting him in the position loftier than ever.

But a cautionary tale should serve him well. Back in 2013, Nonito Donaire was basking on the glory of being 2012 consensus Fighter of the Year. But he ran into Rigondeux in New York City and pulled him back to earth.

Title on the line. Doesn’t get any bigger than this 🙌😎#RigondeauxCasimero pic.twitter.com/GLmiBM2q6F

“I congratulate Casimero on making weight. I know full well it isn’t easy. I also give him credit for accepting this challenge. This man had the courage many others lacked. You know all know the names of those cowards,” Rigondeux said on Twitter.

Then again, Casimero is a rising star compared to the aging Cuban who wasn’t very active considering his talent and reputation.

Rigondeux was only beaten once in his career. That’s when he retired on his stool after six rounds, handing the victory to Vasyl Lomachenko in a super featherweight clash in 2017.

Lomachenko, also a two-time Olympic winner, later said Rigondeux was fish out of the water at super feather. But it was undeniable that he beat Rigondeux via a deluge of punches.

Casimero, aching to be taken seriously, could attempt to follow that template. Or suffer trying.

Casimero vows to KO Rigondaeux: ‘I will stop him in 3 rounds’