(FILES) In this file photo taken on June 23, 2021 Portugal’s forward Cristiano Ronaldo celebrates after scoring a second penalty kick during the UEFA EURO 2020 Group F football match between Portugal and France at Puskas Arena in Budapest on June 23, 2021. – Manchester United announced on Friday they have reached a deal to re-sign Cristiano Ronaldo from Juventus, 12 years after he left Old Trafford for Real Madrid. (Photo by BERNADETT SZABO / POOL / AFP)

Cristiano Ronaldo completed an emotional return to Manchester United on Friday, 12 years after leaving as the world’s most expensive player, tasked with firing the Red Devils back to the top of the English and European game.

The 36-year-old has forced a return to the Premier League from Juventus as one last shot at a sixth Ballon d’Or and Champions League title.

Ronaldo arrived at United as a skinny 18-year-old from Sporting Lisbon in 2003 with a bag of tricks.

In six years under the tutelage of Alex Ferguson his physique and end product were transformed to lead United to three Premier League titles and Ferguson’s final Champions League in 2008. 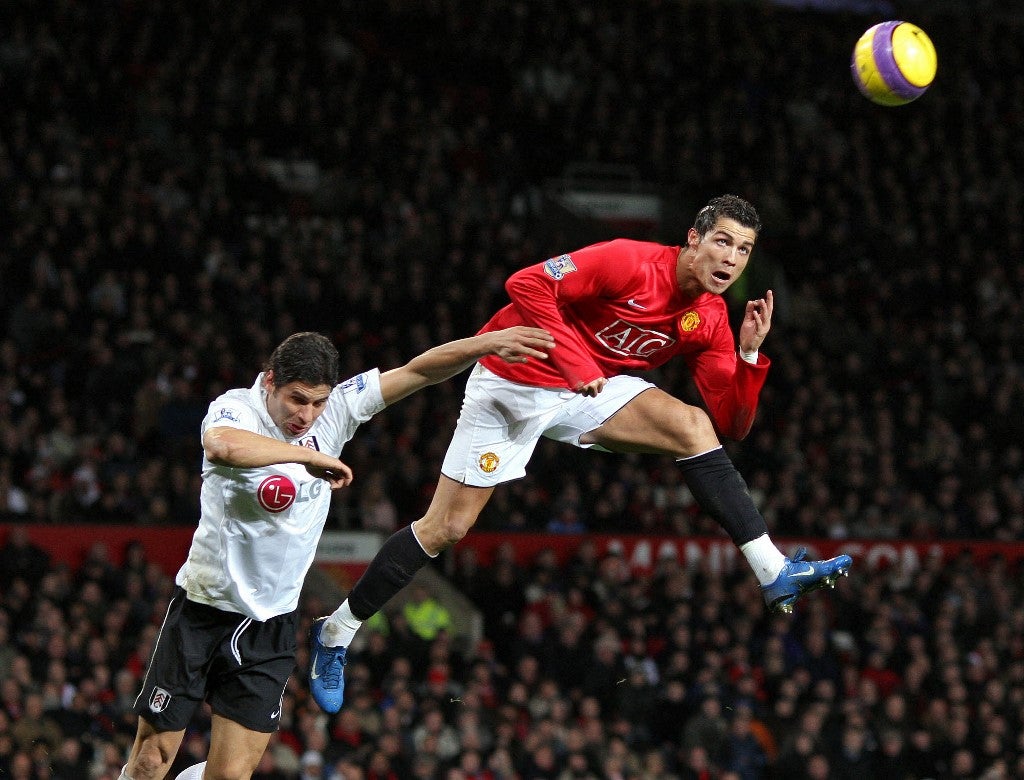 (FILES) In this file photo taken on December 03, 2007 Cristiano Ronaldo (R) of Manchester United heads his second goal past Dejan Stefanovic of Fulham during the Premier league football match, 03 December 2007 at Old Trafford, Manchester, north-west England. – Manchester United announced on Friday they have reached a deal to re-sign Cristiano Ronaldo from Juventus, 12 years after he left Old Trafford for Real Madrid. (Photo by Andrew YATES / AFP)

However, even United could not resist Ronaldo’s desire to move to Spain when Real Madrid offered a then-world record £80 million ($110 million) in 2009.

Real was more than rewarded with nine years of Ronaldo in his prime.

He smashed the club’s all-time goalscoring record at a rate of more than a goal a game, netting 450 times in 438 appearances.

After ending Real’s long wait for “La Decima”, the club’s 10th European Cup, he spearheaded a run of three consecutive Champions League wins between 2016 and 2018.

That is what United is looking for an aging Ronaldo to repeat.

The club he returns to is different from the all-conquering behemoth he left behind.

United has not won a league title since Ferguson left in 2013 and have failed to even qualify for the Champions League regularly in the intervening years.

Progress has been made in the nearly three years since Ole Gunnar Solskjaer replaced Jose Mourinho, but the Norwegian is still to win a trophy as United boss and they finished a distant second to Manchester City in the Premier League last season.

Ronaldo’s experience in Italy also serves as a warning of what could go wrong on his return.

Juventus had reached the Champions League final twice in three years prior to Ronaldo’s arrival in 2018 for 112 million euros.

In his three seasons in Turin, la Vecchia Signora never made it beyond the quarter-finals — crashing out to far less well-resourced opposition in Ajax, Lyon and Porto.

But Ronaldo can argue that was a sign of the Italian giants’ declining standards rather than his own.

Juve has changed managers in each of the past three seasons only to end up back where they started by reappointing Massimiliano Allegri.

And he also rolled back the years at Euro 2020 to win the Golden Boot despite playing just four games as Portugal bowed out at the last 16.

Unlike at Juventus, Ronaldo is returning to a situation more akin to what he enjoyed at Madrid, surrounded by a star-studded squad.

However, United’s season and Solskjaer’s time in charge will now likely come down to whether Ronaldo fires or fails second time around at Old Trafford.