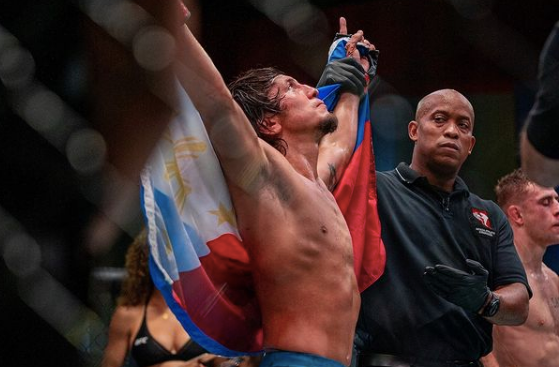 MANILA, Philippines—Prospect Ricky Turcios, who is of Salvadorian-Filipino descent, secured a UFC contract after a close split decision win over Brady Hiestand in the bantamweight finale of The Ultimate Fighter Sunday (Manila time) at UFC Apex in Las Vegas.

A natural striker, Turcios went toe-to-toe with the proficient grappler that is Hiestrand, eventually taking the nod of two of the three judges 29-28, 29-28, 28-29.

Hiestand had over five minutes of ground control on the back of his six takedowns but Turcios was more convincing during their exchanges on the feet.

Turcious then landed a cracking right hand that rocked Hiestand.

“It’s a dream come true. I wanna say salamat sa Diyos, thank God,” said Turcios, whose mother is Filipino, in the in-cage interview. “I want to give a message to the children. Believe in yourself, don’t fear failure, work hard, stay positive, and enjoy the journey.”

Turcios is just one of several fighters of Filipino descent who have made it to the UFC, including Mark Muñoz, Brandon Vera, and Mark Striegl.