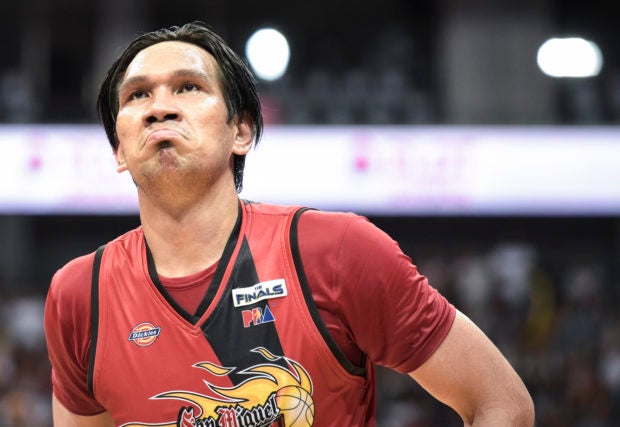 He’s anticipating that the one other thing happens on Wednesday, when his Beermen, led by the comebacking 6-time Most Valuable Player Fajardo, slug it out with unbeaten TNT and hoping to stay at the coattails of the elimination round leaders at Don Honorio Ventura State University Gym in Bacolor, Pampanga.

“It’s a big game for us,” Austria said when asked of his thoughts on their 3 p.m. clash with the Tropang Giga as the Beermen try to stay in the upper half of the 12-team field. “We will be playing an undefeated, very cohesive team. This will be a very big test for us, for sure.”

And he hopes that big test will drum up an even bigger response from his main man, who is recovering on two fronts: Physically and emotionally.

“I really hope so,” Austria said when asked if he was expecting something big from Fajardo against the Tropang Giga, now that he is a happy camper on the basketball floor again. “He’s close to nearing normal form and his mind is already in the game. So that’s good.”

Fajardo is slowly working himself back to form after rehabilitating his leg, which underwent surgery. He is also recovering emotionally following the death of his mother, Marites.

“He smiles now, he talks to his teammates more often now,” Austria, who actually snapped a photo of the first time Fajardo smiled again, said. “It was understandable because she was his world. She was the one who molded him into becoming the person and player that he is.”

Chot Reyes of TNT, meanwhile, is hoping that the veteran Kelly Williams can play and be another big body that can help stop Fajardo underneath.

“Pray,” Reyes replied when asked of special plays the Tropang Giga will employ against Fajardo. “We’re just hoping that Kelly and Glenn (Khobuntin) can play. They got injured the last game.”

Magnolia will try to bounce back from its second loss of the conference—dealt by the Tropang Giga over the weekend where Williams scored 13 points, grabbed 15 rebounds and had three blocks—when the Hotshots battle a resurgent NLEX side in the 12:30 p.m. game even as defending champion Barangay Ginebra and Rain or Shine collide in the 6 p.m. main game.

The Tropang Giga have run roughshod on their first six foes as Reyes hasn’t had any difficulty having his rock-solid crew share the ball during the most crucial times.

But San Miguel remains to be the most dangerous team in the field, hands-down, because of Fajardo, the 6-foot-11 center who helped the Beermen establish an all-Filipino dynasty in the last decade.

San Miguel failed at a sixth straight title because Fajardo sat out the bubble conference in Pampanga last year with a broken shin.

Meanwhile, NorthPort appeared on the newly-released schedule as the Batang Pier get to see action for the first time since the reboot by clashing with listless Blackwater in the last of two games scheduled on Thursday.

Bonnie Tan, the NorthPort team manager, will call the shots for the Batang Pier in their 4:35 p.m. clash with the Bossing as coach Pido Jarencio and all members of his staff continue to recover from the harsh effects of COVID-19.

The Batang Pier will again play on Saturday, against Terrafirma, and will have NLEX on Sunday as they try to catch up with the others in terms of games played after being sidelined since the reopening because Jarencio and his staff caught the virus that left the entire team grounded.

“I’m recovering pretty well, although I still feel fatigued at times,” Jarencio told the Inquirer over the phone from his quarantine isolation room at Lux Hotel. “I have a pretty good idea of how the team is doing.” INQ