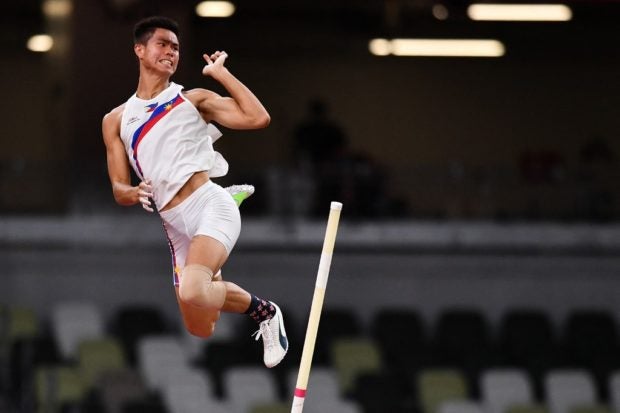 EJ Obiena has no choice but to stop campaigning. —AFP

Pole vault ace EJ Obiena has been on a roll lately. And he’s putting a stop to that, with a heavy heart, of course.

The 25-year-old Obiena, ranked fifth in the world, has been forced to call it a season after draining his budget from the government at the end of August, baring that he and his team have shouldered his competition expenses the past month where he bagged a number of medals and even reset the Asian record.

Expenses for stints that included one in the 17th Golden Rooftop Challenge in Innsbruck, Austria, last Sept. 12 where he cleared 5.93 meters on the way to capturing the gold medal and ripping the old mark in the region that stood for 24 years, came out of his team’s pocket.

“I needed to cut the season short as my budget is only until August,” said Obiena. “The meets after August were shouldered by myself and my team. Berlin (where he placed fourth) was the last one for me this season.”

The Philippine Sports Commission, which spends for most of his training, is waiting for certification from the Asian Athletics Association so it can reward his Asian record feat with the sum of P1.5 million, which still doesn’t represent training money nor is intended for competition expenses.

“It’s taking some time because it has to go through a process, but it’s just mere formality,” said Philippine Athletics Track and Field Association marketing and communications director Edward Kho.

Kho said Asian continental certification is more complicated than the Philippine record, which was rewritten by Obiena a total of three times this year.

“When was the last time a Filipino set a continental record? It doesn’t happen every day,” added Kho.

Obiena captured silver late August in the Paris Diamond League, where he cleared 5.91m, a new PH mark then.

But only two weeks later, he smashed it with that 5.93 leap, which also erased the previous 5.92m mark of Kazakh Igor Potapovich in 1998.

Obiena, who placed 11th in the Tokyo Olympics, is only seven-tenths of a meter away from six meters that only a few aces in the world have managed to clear.

“It’s only a matter of time before he makes six meters, that’s from what we saw of his clearance [in recent vaults],” said his father and coach, Emerson.

The Tokyo Olympic gold height was only 6.03m turned in by reigning world record-holder Mondo Duplantis of Sweden.

Obiena’s 5.93 would also put him tied for third place among the best in the world this season, just behind the 6.10m of Duplantis and 5.97m Christopher Nilsen of the United States.

Meantime, he’s back in Formia, Italy, secured by the fact that he’s the best in Asia.