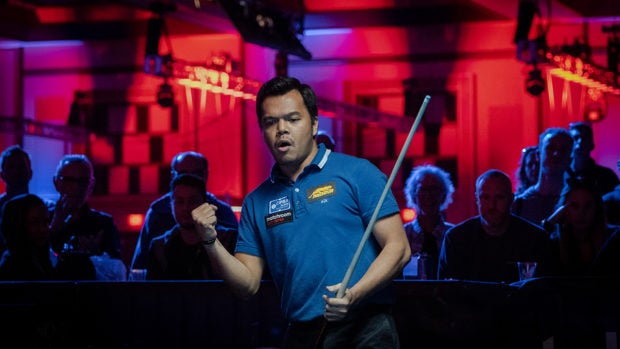 Carlo Biado reacts to a made shot during his semifinal match with Naoyuki Oi of Japan. —PHOTO COURTESY OF MATCHROOM POOL

Filipino Carlo Biado completed his day of rallies as he swept the last 10 racks against a formidable Singaporean foe in the finals on Saturday (Sunday in Manila) to not only win the US Open Pool Championship but also put himself in the conversation for a seat in the sport’s Hall of Fame.

Biado erased an 8-3 deficit to clip Aloysius Yapp, 13-8, for the title at Harrah’s Resort in Atlantic City, New Jersey, becoming the first Filipino since the enigmatic Efren “Bata” Reyes in 27 years to win the prestigious event that would hopefully reignite a boom in the sport back home.

The 37-year-old former golf caddy, who climbed out of an 8-4 hole in the semifinals against Naoyuki Oi of Japan before prevailing, 11-8, broke a lengthy chain of frustrations that hit Filipinos in the event, pocketing the $50,000 (roughly P2.5 million) champion’s purse offered in one of the most celebrated tournaments in the sport.

“I’m very happy because [winning] this event is one of my dreams,’’ said Biado during the awarding ceremony as he fought back tears.

“I dedicate this to my family, also to my baby. Thanks to all of you. Even in this time of pandemic, you’re still here watching around the world,’’ added the 2017 World 9-Ball champion.

It nearly didn’t materialize had the Singaporean gotten away with a critical miscue on the 9 ball in the 12th rack, the flash point that jumpstarted Biado’s blazing finish.

After the striped yellow-and-white 9 ball rolled into the cup in the 21st rack, Biado shouted in delight and pumped his fist thrice before going atop the table to whoop it up and celebrate his win for the ages.

“Great and sweet victory for Carlo and the Philippines despite the pandemic. Biado hardly had the time to practice during the lockdown. He only practiced by himself on his pool table at home last year,’’ said Billiards and Snooker Congress of the Philippines secretary general Robert Mananquil.

Biado’s second major world title cut a long string of disappointments that hit Filipinos in the US Open since Reyes captured the title in 1994.There were actually two Filipinos in the semifinals, only for the veteran Dennis Orcollo to succumb to Yapp, 11-6, where the 25-year-old Singaporean thwarted several rallies by Orcollo.

Fourth Filipino, if ever

“His triumph, after Efren in 1994, would encourage Filipinos to bring out their cue sticks again. It’s a boost to billiard sports in the country,’’ said Mananquil.

Only three Filipinos have made it to the Billiard Congress of America Hall of Fame—Reyes in 2003, Francisco “Django’’ Bustamante in 2010 and Alex Pagulayan in 2019—all of them enshrined in the world’s greatest players category.

Matchroom Pool, the world’s leading 9-ball pool promoter, posted in a recent Tweet that Biado could be locked in for Hall of Fame consideration after joining Reyes, his boyhood idol, as US Open champion.

And that would feel winning more than the money staked in the tournament. INQ