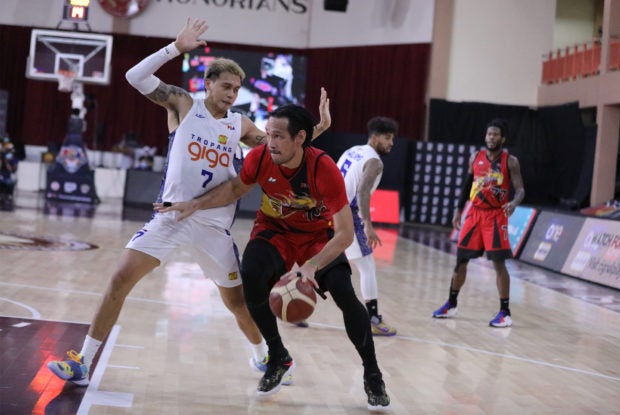 TNT had to play brilliant basketball on both ends of the court just to hold off a San Miguel Beer side out on a mission, which explains Chot Reyes’ worries right after Tropang Giga’s Game 1 89-88 triumph in the PBA Philippine Cup semifinals on Sunday.

Fortunately for the top seeds, they will only get better.

The Tropang Giga dove into the series opener on some sort of a leash: Best Player of the Conference front-runner Mikey Williams was playing against defensive whiz Chris Ross, thus prompting him to contribute through other ways. Meanwhile, former league Most Valuable Player Kelly Williams missed the game due to health and safety protocols.

By the time the ball is tossed for the opening jump in the 3 p.m. Game 2 clash at Don Honorio Ventura State University in Bacolor, Pampanga, TNT’s spitfire rookie guard would most likely have figured out how to work around Ross and get more active offensively. Meanwhile, Williams, the grizzled veteran providing ceiling and coverage, should afford the Tropang Giga another defensive dimension against the Beermen, who will certainly try to avoid sliding into a precarious playoff hole.

“I think we could shoot better,” said Reyes, whose wards were just 40 percent from the field in Game 1 (36 of 90), with Williams, the super rookie, managing just seven points on 3-of-12 shooting from the floor (25 percent). “But in the end, it all starts with the effort. Playing with a lot of effort gives us a chance.”

Things are also spicing up over at the other Final Four matchup as well, with Magnolia bracing for a vengeful Meralco in the contest slated at 6 p.m.

“This is the semifinals, so we expect each game to be a grinding game,” said Hotshots coach Chito Victolero.

“We know that it’s not going to be easy [advancing],” he added. “Like what we always tell ourselves, if you do not put in the work, you’re really going to lose.”

Magnolia also played through limitations in that earlier duel, but still found ways to pull out a 88-79 victory.

Calvin Abueva, neck-deep in the race for the top individual plum with TNT guard Williams, had to play through foul trouble, forcing Victolero to deal with a “messed-up rotation.”

Fortunately, his other forwards were ready and capable. Jack Corpuz, Rome dela Rosa and Aris Dionisio kept Magnolia head above water, allowing the club to reinsert his do-it-all ace in the most crucial of times.

And Victolero has faith the rest of his charges will continue being up to snuff.

“I like the attitude of my players. I like their discipline,” he said. “We’re hoping of the same as the series goes on.” INQ