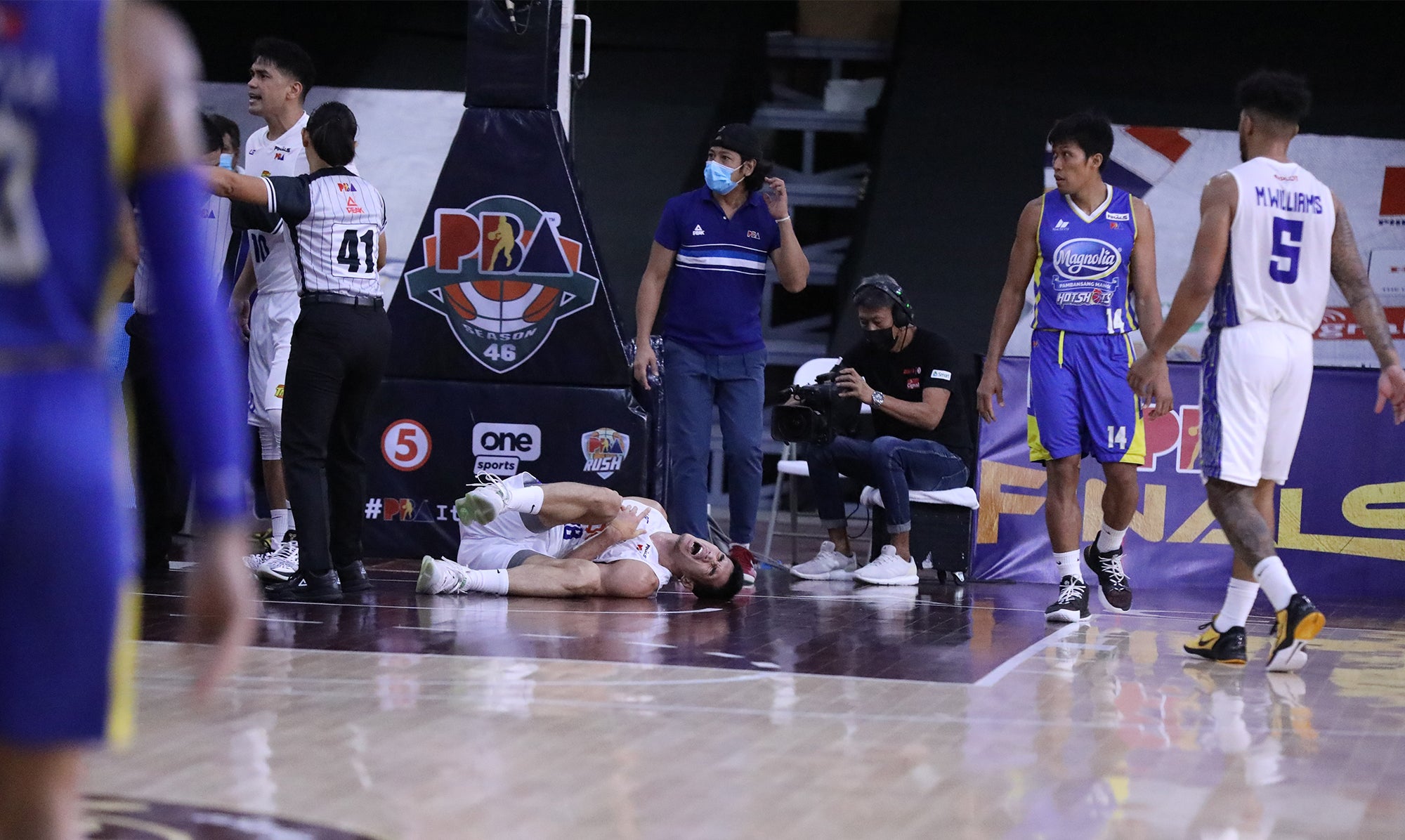 MANILA, Philippines—Basketball will always be a brotherhood for Magnolia head coach Chito Victolero.

TNT and Victolero’s Hotshots were locked in a testy Game 3 that saw the usual physicality and visible emotions characteristic of the championship round.

But there was one instance where the one-time champion had to look out for his opponents.

Tropang Giga forward Troy Rosario suffered a nasty spill late that reportedly dislocated his pinky finger in the third quarter when he got into contact with Hotshots forward Jackson Corpuz on a layup attempt.

It was visually clear that Rosario wouldn’t be able to come back to the game after such a dangerous incident and Victolero said that while they’ll always be physical, keeping everyone’s well-being is always a top priority no matter the team.

Troy still on the floor after a collision with Corpuz.

“I asked Jackson if he was okay, and of course I send my prayers to Troy, we don’t want that to happen, we don’t want any injuries to other players,” said Victolero following Magnolia’s 106-98 Game 3 win Sunday at DHVSU Gym in Bacolor, Pampanga.

Corpuz was eventually charged with a disqualifying foul and was ejected from the game at the 3:29 mark of the third.

Rosario, meanwhile, had his teammates carry him off the playing floor.

“At the end of the day, we all have the same jobs. We play physical, on the court we’re opponents with each other, we’re both fighting for our lives and the championship, but after the game our prayers will always include each other.”

“We’ll of course include Troy in our prayers.”

No time to relax for TNT, Mikey Williams despite 2-0 lead

Read Next
V.League woes continue for Santiago, Bagunas, Espejo
EDITORS' PICK
Acer starts the year off strong with the Aspire Vero National Geographic Edition
‘Not yet the end’: Lawyer says Marcos Jr’s DQ cases to take lengthy process
Over 3 Million worth of prizes to be won at Smart Padala’s SENDali Manalo Promo!
Comelec division junks petition to cancel Marcos COC for president
The best of bayside and city living at SMDC’s Sail Residences
PH logs 37,070 more COVID-19 cases; over 33K others recover
MOST READ
NBI foils escape attempt of Kerwin Espinosa, two others
Marcos camp ‘extends hand of unity’ after COC cancellation bid is thrown out
Wendell Ramos finally gets to hold his newborn for the 1st time
No vaccine, no French Open for Djokovic, says French Sports ministry
Don't miss out on the latest news and information.